Pre-Code vs Post-Code: "Picture Snatcher" and "Escape From Crime" 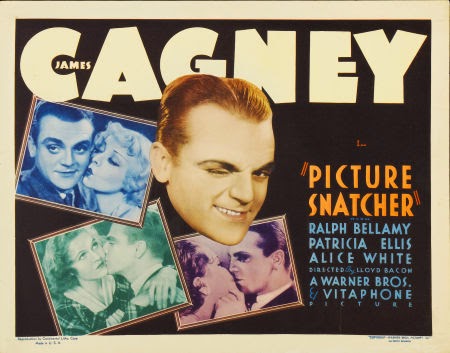 If you removed the atmosphere of breezy amorality from the 1933 film "Picture Snatcher," you wouldn't have much of a movie.

Both films are based on an original story by Danny Ahearn, but "Picture Snatcher" has that cheerful pre-code let's-see-what-we-can-get-away-with spirit, personified by our hero, Danny Keene, played by James Cagney. "Picture Snatcher" is a pretty typical pre-code Cagney picture, and to me that's not bad at all -- it has spice, irreverence and a bit of a nasty 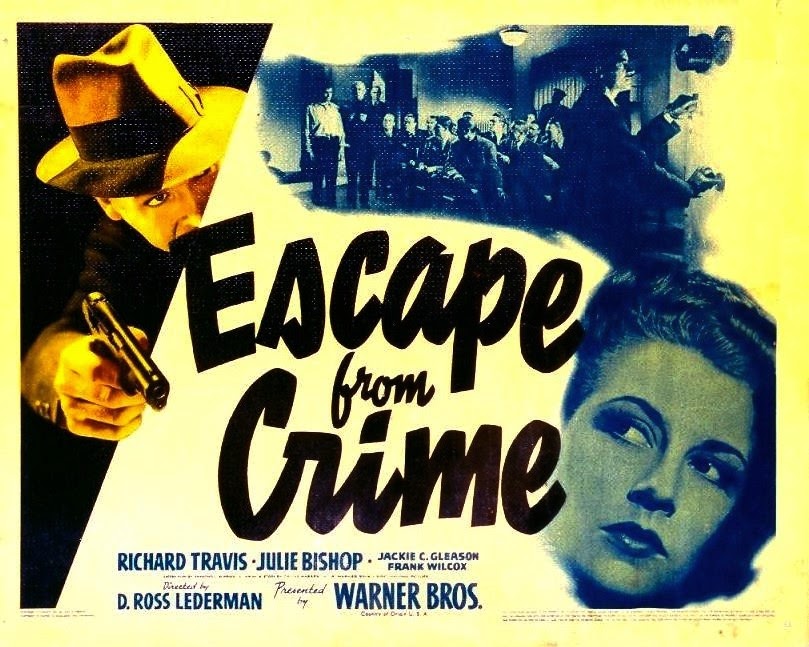 streak, and it feels no need whatsoever to apologize for itself.

The bare bones of Ahearn's story -- paroled convict gets a job as a rough-and-tumble newspaper photographer -- is the same in both films, but "Escape From Crime" removes all the tasty vices on display in "Picture Snatcher," and the result is flavorless and forgettable.

Here Danny is played, glum and guilt-ridden, by Richard Travis. In fact, Danny, also known as Red, is so surly that Jackie Gleason, in a brief bit as the world's most hilarious convict, can't even get him to crack a smile:

(You have just seen Gleason's entire performance. He doesn't show up again.)

Post-code Danny is cranky because he hasn't heard from his wife Molly (Julie Bishop) in a long while. Yes, this Danny is married, unlike pre-code Danny. And he has a baby daughter. So when post-code Danny gets a parole from Stock Footage Penitentiary, he's on the street with not one, but three, mouths to feed. When Danny gets sprung he heads right to see Molly, and whatever disagreement they were having instantly disappears. So why give Danny an attitude at the beginning? It's not the last time that this movie won't make a lot of sense.

In "Picture Snatcher," things also begin with Danny's release from prison, but it's a much jollier affair. Danny's old gang comes to pick him up, and they brought along a couple of women to make Danny welcome. Then Danny indulges himself with a perfumed bath and coolly announces to his buddies that he's dropping out of the crime game. He ends his speech by taking the money that was owed him as part of the job he went up the river for and then strolls out. In other words, Boom.

Post-code Danny, meanwhile, is a painfully straight arrow, and he's broke. But he spent his time in stir taking mugshots, so he's learned about photography, and he appeals to newspaper editor Cornell (Frank Wilcox) for a job. Cornell is as much of a stick-in-the-mud as Danny -- Cornell's pre-code equivalent, editor "Mac" MacLean (Ralph Bellamy), is shacking up with one of the reporters (Alice White) and drinks bourbon on the job. Cornell just sits at his desk and gives the impression that his suspenders are too tight.

Anyway, post-code Danny gets turned away jobless, and as he leaves the office two things happen -- one is that he meets his old nemesis, flatfoot Biff "Biff" Malone, who sent him up; and the other is that he witnesses and photographs a bank robbery.

Compare that to the other Danny's first job, a pre-code situation if ever there was one -- a firefighter is holed up in his own burned-out apartment. His crew was called to a fire there, and the firefighter discovered his dead wife in bed with another man. Danny's job is to get an old photo of the firefighter and his wife, so he poses as an insurance man sent to survey the damage.

That incident illustrates some of the nastiness in "Picture Snatcher" -- we actually root for Cagney to take the poor guy's wedding picture.

But the story's one big plot element makes it into both movies -- to save his job, Danny is forced to take an illegal photo of someone in the electric chair. When the rival reporters find out, they (and the cops) chase Danny back to the paper. Just watch how Cagney and Travis each handle the scene:


Something else to watch in those clips -- the sets. "Picture Snatcher" actually looks like it was shot in New York City, while "Escape From Crime" is pretty clearly stuck on the Warner back lot. We're supposed to be in Manhattan, but the bank holdup that Danny witnesses is at the "Doreville State Bank." Doesn't sound very cosmopolitan to me. And he and his wife are supposed to live on East 65th Street, but their house looks a bungalow, and you're about as likely to see a bungalow on the Upper East Side of New York City as you are a taxi-driving octopus.

The performances are also miles apart -- at one point, Travis walks into the family home with a "Sure and it's your husband, Mrs. O'Hara!" No. Do not attempt an Irish brogue, Richard Travis. Just don't. You are no James Cagney. You're no Jeanne Cagney, for that matter.

"Escape From Crime" does give us plenty of gunplay, and why not? Violence is fine in a post-code movie; sex, not so much. But the movie's real failing is that, unlike "Picture Snatcher," the makers forget a simple fact -- a great journalist can, and maybe even should, have a slightly larcenous side.

The Helen Vinson Film Festival: "Two Against the World" and "Grand Slam"

Of all the actors and actresses who appeared in 1930s movies, Helen Vinson (1907-99) was certainly one of them.

Born Helen Rulfs in Beaumont, Texas, Vinson was the daughter of an oil company executive and grew up on a country estate. She attended the University of Texas, where she performed in shows, and ended up doing little theatre in Houston. This led to Broadway, a name change, and then Hollywood, where in 1932 Vinson went to work at Warner Bros.

Given her upper-class upbringing, playing the high society type came easily to Vinson. She was the opposite of streetwise Warner leading ladies like Glenda Farrell or Joan Blondell -- she was attractive in a demure way and spoke in an achingly proper manner.

One of Vinson's first films at Warner's is the majestic "I Am a Fugitive From a Chain Gang." Vinson plays Helen, who meets James Allen (Paul Muni) after his first escape from the chain gang. He has changed his identity and built himself a successful engineering career in Chicago, but he is unhappily married to the blackmailing Marie (Glenda Farrell). For once, Vinson is the attractive alternative, but when Allen tries to leave his wife, Marie turns him in to the authorities. This leads to Allen escaping from the gang yet again and returning for a brief visit with Helen in the film's powerful final scene.


"I Am a Fugitive" shows us a warmer, more attractive side of Vinson -- she actually gets to act like a human being as opposed to someone being rude to servants at a cocktail party.

For an example, consider 1932's "Two Against the World," set in a world of thoughtless rich people, the Hamilton clan. Here Vinson is Corinne Hamilton Walton, a sociopathic socialite who's preoccupied with important things like gahden pahties. She's married to a rich stiff named George (Alan Mowbray at his stuffiest). But Corinne is not hap-peh; she's been having an aff-aih until her lover breaks up with her because he loves her sister Adell (Constance Bennett).

Adell Hamilton, on the other hand, has set her cap for dashing young man-of-the-people attorney David Norton (Neil Hamilton), and they bond over a lunch of baked beans at Norton's favorite greasy spoon.


Things take a dramatic turn when Adell and Corinne's brother finds a compact on the lover's bed that just happens to have the old Hamilton family crest on it. The brother thinks it belongs to Adell, but he is mistaken, and this leads to an outbreak of frantic eye contact between the two sisters.


The lover ends up getting seriously killed by Corinne and Adell's brother and, in order to save the reputation of her unfaithful sister and her guilty brother, Corinne takes the fall. But the prosecuting attorney is -- David Norton, Mr. Baked Bean of 1932!

Considering that it's her infidelity that drives the plot, there isn't much of Vinson in "Two Against the World" -- she doesn't even get the satisfaction of shooting her ex-lover! Instead the movie centers around the love story between Adell and Norton (Hamilton was also Bennett's romantic interest in "What Price Hollywood?"). Vinson might as well wear a shirt saying, "I had an affair but all I ended up with is Alan Mowbray." It's not even clear which "two" the title is referring to -- Adell and Norton? The two sisters? The Warner brothers?

How you feel about the 1933 film "Grand Slam" will depend on how funny you find jokes about playing bridge. The film is a product of a time when the card game was the national craze.

Paul Lukas plays Peter, a mild-mannered man of Russian heritage who, everyone tells us, is a genius. He lives happily and simply as a waiter in a Russian restaurant, but one night his fiancee Marcia (Loretta Young) drags him to a bridge game. He masters the moves immediately, because he's a genius, remember? Then he ends up working at Park Avenue party, where a ritzy group including Lola (Vinson) needs a fourth for bridge. Peter steps in and his expertise makes him the life of the pah-ty:


Lola's attention leads to the breakup of Peter and Marcia, and the climax of the movie comes in a bridge match between Peter and the stuffy, self-appointed bridge expert Van Dorn (Ferdinand Gottschalk). Worldwide interest is so intense that once they start playing, time stands still!

"Grand Slam" is a stew -- a tasty one, with bits sprinkled in by Roscoe Karns (also in "Two Against the World") as a wisecracking radio announcer and our old friend Joseph Cawthorn doing his patented grouchy ethnic schtick, but still a stew.

To Vinson, who stood five feet seven inches tall, Hollywood was "an absolute sea of short men," she later told one interviewer. "Robinson, Muni, James Cagney and George Raft all had to stand on boxes when they acted with me."

The sea of short men started drying up in the late 1930s. In 1938 Vinson was in the headlines for divorcing husband Fred Perry, a British tennis champion who'd begun an affair with Marlene Dietrich. Shortly afterward she married socialite-businessman Donald Hardenbrook. Her last film role was in 1944's "The Thin Man Goes Home" and she returned to the East Coast with her husband, where she studied interior design and preferred not to look back at her film career.