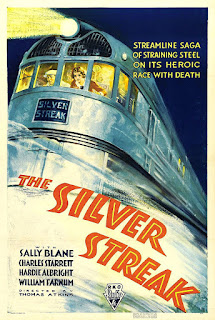 This is part of the CMBA Fall Blogathon: Trains, Planes and Automobiles. Check out all entries!

The star of the 1934 film "The Silver Streak" isn't first-billed Sally Blane, or even male lead Charles Starrett.

Specifically, it's the future in the form of the Pioneer Zephyr, a streamlined diesel train here called the Silver Streak. But incidental roles in the movie are played by the Century of Progress International Exposition, also known as the 1933-34 Chicago World's Fair; by Boulder Dam (now known as Hoover Dam), at that point the nation's largest construction project; and even by the recent development of the iron lung.

All these projects sent the same message to depression-weary America -- that prosperity was connected to innovative engineering and improved infrastructure.

As a film, "The Silver Streak" sends a much simpler message -- work hard, be handsome, develop a streamlined train, and you end up winning Loretta Young's sister. But it's a fast-moving B movie that's very much a product of its time, with lots of cool location footage of the Zephyr, the Chicago World's Fair and Boulder Dam (with real workers in bit parts).

We begin in the offices of the Stuffy Old White Guy Railroad, run by B.J. Dexter (William Farnum). Passenger revenues are off, and Dexter's assistant Allan (Hardie Albright), who is also his son, supports a plan for a new, more efficient streamlined train developed by lantern-jawed Tom Caldwell (Starrett). Caldwell pitches his idea to a skeptical board of directors:


Caldwell is thrown out by the seat of his blueprints, but he has another booster -- Dexter's daughter, Ruth (Blane, Young's real-life sister). She approaches a locomotive manufacturer on Tom's behalf, and before you can say "Amtrak," the Silver Streak is ready for its maiden run.

The elder Dexter and Ruth are on board, but things don't go as planned -- there's an engineering glitch:


(Dig that 1934 streamlined Chrysler Airflow on the road, by the way.)

Naturally, instead of spending a little more time figuring what's wrong with the Silver Streak, the decision is made to scrap the whole project and put in on display at the fair in Chicago. Tom tells off Dexter, and he and Ruth break up.

A few weeks later, Tom has figured out the engineering problem, but the railroad management would prefer to keep the train as the world's largest paperweight.

Meanwhile, Allan Dexter is leaving the family railroad because of his father's refusal to be innovative. This leads to a nice scene where the elder Dexter puffs his stogie like a locomotive and reminisces about trains of the past:

Allan Dexter goes to work at the dam in Nevada. Turns out that the men on the project are coming down with infantile paralysis, and no sooner does Allan get there than he passes out. Ruth has come to see him, but that's not enough -- he needs an iron lung immediately. Father Dexter is beside himself -- how to get an iron lung cross country toot suite? If only there was some sort of really fast train to take it!

The last third of "The Silver Streak" is all about the 100 mile-an-hour overnight race from Chicago to Las Vegas. Edgar Kennedy, God love him, steps in as an old school co-engineer and gives us several good examples of his burn takes in between thrill sequences like this:


There are lots of complications along the way, including close calls with oncoming trains, tricky curves and guys who almost don't get their handcar off the track fast enough. On board, meanwhile, Tom has to deal with hysterical passengers, an escaping murderer and, worst of all, Arthur Lake as comedy relief.

To the surprise of no one in the civilized world whatsoever, the Silver Streak makes it to Vegas, the train's future is assured, and Ruth and Tom make up.

In real life, by the way, the Pioneer Zephyr made headlines in May 1934, when it traveled from Denver to Chicago in about 13 hours, almost breaking the land speed record for that time -- and the engineer happily endorsed Camel cigarettes after his run.

And if you'd like to see the real Pioneer Zephyr, it's on permanent display at Chicago's Museum of Science and Industry.