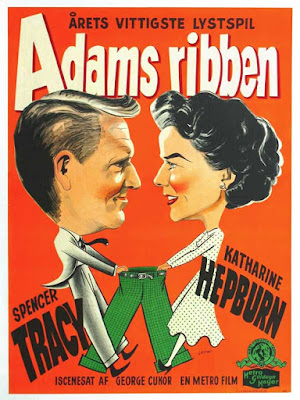 Husband: Here we are.

Wife: You took the words right out of my mouth.

You have just read great screenwriting.

That is: When we think of the unique give-and-take that we associate with a Tracy and Hepburn movie, the immovable male (who ends up moving) versus the edgy female (who loses some of her edginess), we think of this movie. Or I do, anyway -- so there! I'm also hazarding a guess that this movie comes closest to echoing their offscreen relationship, but maybe that's just a wish and not a fact.

Beyond that -- and adding to its greatness -- "Adam's Rib" captures, better than just about any American movie I can think of, what it's like to be married to someone in the best possible way -- sharing an easy, everyday intimacy that enriches your life and yet can still drive you crazy. No doubt Gordon and Kanin had this kind of relationship -- if they didn't, and they were still able to write a script like this, it's some sort of freaking miracle.

Even the way the story for "Adam's Rib" came about sounds like something that could happen in the movie -- Gordon and Kanin were driving through a frightening storm, and Gordon wanted to concentrate on something else. So she asked Kanin to tell her a story. He told her the true story of actors Raymond Massey and Adrianne Allen. Once upon a time, they were married to each other, and they decided to split. Their attorneys were married to each other. During the legal proceedings, each of them fell in love with their attorneys, so both couples split and then everybody got married to everybody else.

From that, "Adam's Rib" began its gestation. 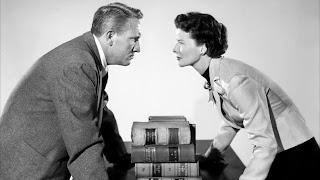 On the surface, of course, "Adam's Rib" is about a courtroom battle between two married attorneys on opposite sides of a case who almost divorce -- Amanda Bonner (Hepburn) is in private practice, and Adam (Tracy) is an assistant district attorney.

The case they get mixed up in involves Doris Attinger (Judy Holliday), a wronged wife. One afternoon, she buys a gun and follows nogoodnik husband Warren (Tom Ewell) to an assignation with lady friend Beryl Caighn (Jean Hagen). Doris barges in and shakily aims her gun at Warren, winging him. Then Doris breaks down and is arrested.

Something about Doris's case awakens the crusader in Amanda. She visits Doris in jail and gets her story, in a scene that also acts as a kind of unofficial screen test of Holliday for the Billie Dawn role in "Born Yesterday":


To paraphrase Carl Laemmle, good writing is worth repeating -- especially since this blogathon is about words. So dig the dialogue between Amanda and Doris. Notice how it's witty, yet appropriate and informative.


Amanda: Now, you would help us very much if you could reconstruct the day. All of yesterday.

Doris: And I see he didn't sleep home.

Amanda: You were shocked and surprised.

Doris: Oh, no. Not shocked, not surprised. He used to not do that a lot, come home.
...
Doris: So then I bought some chocolate nut bars ... and I went outside of his office and I waited the whole afternoon. And I kept eating the candy bars and waiting until he come out. And then I followed him. And then I shot him.

Amanda: And after you shot him, how did you feel?

The Attinger Affair opens the movie with unexpected drama, with Manhattan location filming and a slight seediness that calls to mind "Naked City." The Attingers, even if they were getting along, are loud and unsophisticated -- they're a world away from the Bonners in several significant ways, and the script expertly conveys the way each couple lives, talks and fights.

Meanwhile, Adam has found out that Amanda will be his adversary in the courtroom. He steadfastly sticks to the idea that Doris Attinger deserves justice for what she did, but Amanda wants to make Doris more than a defendant -- she wants her to serve as a symbol for wronged womankind. But their argument about it never descends to Attinger territory -- they exchange words and then use their pet name for each other.

Adam: I am going to cut you into 12 little pieces and feed you to the jury. Good night, Pinkie.

In the courtroom, Amanda is intent on defending her client by skewering gender assumptions while Adam steams. And the headlines come at Adam's expense -- especially when a female weightlifter (Hope Emerson) lifts Adam in a show of strength.

That night, it's impossible for Adam to just make nice. He and Amanda are going to give each other massages, but his anger slips out, and an affectionate pat on the fanny is delivered with a smidgen of force, to which Amanda takes offense:

Adam: What are ya? Sore about a little slap?

Adam: Well, what then?

Amanda (outraged): You meant that, didn't you? You really meant that.

Amanda: Yes you did. I can tell. I know your type. I know a slap from a slug.

Adam: What've you got back there? Radar equipment?

When the verdict is announced, the photographers for the newspapers (remember them?) want everyone to kiss and make up for the front pages -- the Attingers awkwardly acquiesce, but the Bonners? Not so much.

That night, Amanda is back at the apartment with her willing accomplice, next-door neighbor Kip Lurie (David Wayne), a songwriter in the Cole Porter mode (the song he writes, "Farewell, Amanda," was in fact written by Porter). Kip covets Amanda, and he's more than happy to console her while Adam isn't around.

But suddenly, Adam is around -- with a pistol:


Amanda: Adam. Listen to me.

Adam: Don't you handle me, lady. I'm not nutty. Not any more than the average. You said it yourself today. You said anyone is capable of attack if provoked. You bet, including me. Yes. (To Kip) Don't you move, young man. You stand as still as you can be.

Adam: You said that before.

Amanda: You're sick. Please. What are you doing?

Adam: Teaching a lesson. Him first. Then comes yours. Get away, Amanda.

Adam: Get away, Amanda!

Amanda: Stop it! You've no right. You can't do what you're doing.

Amanda: No one has a right to ... (realizes what she's saying)

Adam: That's all, sister. That's all I wanted to hear. Music to my tin ear. (Puts gun barrel in mouth as Amanda and Kip scream; Adam eats the barrel) Licorice. If there's anything I'm a sucker for, it's licorice.

Adam: Me neither. I'll never forget that no matter what you think you think ... you think the same as I think. That I have no right, that no one has a right to break the law! That your client had no right. That I'm right and you're wrong.

Then Amanda and Adam split up. The end.

But to indirectly prove Amanda's point -- that men and women are fundamentally equal -- Adam wins her back through a traditionally (at least in 1949) feminine method: by fake crying.

In the film's final scene, Amanda and Adam have made and they're heading to their house in Connecticut for the weekend -- but not before a final conversation that kind of serves as the movie's benediction for a fulfilling marriage.

Amanda: Speaking to me?

Adam: You were pretty good.

Adam: All the way through. Especially the summation. You had me.

Amanda: You weren't so bad yourself.

Adam: I didn't think so either. We got a big thing to talk about tomorrow.

Adam: They want me to run for that county court judgeship. The Republicans do. It's a sure seat, practically.

Amanda: I'm real proud of you.

Adam: I'd rather have you say that than anything.

Here's the trailer for "Adam's Rib":