In honor of the film's release by the Criterion Collection -- Which my daughter gave me for Father's Day! -- and which includes a restored, at least as far as is possible, 197-minute version, I have invited my 13-year-old self, Davy, to join me in watching the film for, oh, about the 912th time.

"Thanks for the warning. I need to start taking better care of myself. How do I know you're really an older me?"

Because I know things about you that no one else knows.

When you were three, you made our mom set a place at the dinner table for Shari Lewis.

When you were six, your first-grade teacher wouldn't let the kids correct mistakes on their papers, so you smuggled erasers to the class and got in trouble.

And you have a fixation on Elizabeth Montgomery.

"What's a DVD player? Remember, I come from a time with just three TV channels."

A DVD player is a magical machine that lets you watch any movie you want, whenever you want. They'll start appearing in about 1985. Now let's start the movie with Saul Bass's credits and Ernest Gold's merry-go-round theme:


The next thing we see is a ribbon of asphalt across the California desert. The real star of this movie is the American highway system.

It is -- "21 Jump Street" with Jonah Hill and Channing Tatum.

Never mind -- back to our movie.

We're introduced to the main characters as Smiler Grogan (Jimmy Durante) drives recklessly past them before flying off a cliff and crashing in a valley. They are: 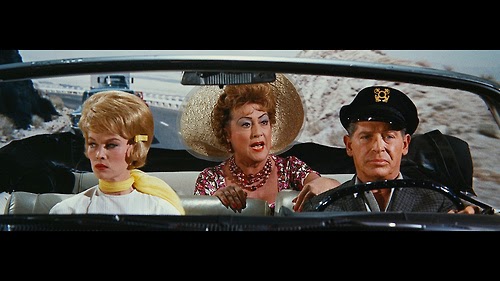 "This is Buddy Hackett's greatest role -- except for 'The Love Bug.' "

Agreed. Before he literally kicks the bucket, Grogan tells the men that he has buried $350,000 from a robbery under a big W in a park about three hours away. And thus begins a race to get the cash. End of exposition. What do you like best about the movie, Davy?

"I hate the name Davy. So here are the things I love most about the movie -- the car chases, Jonathan Winters, Dick Shawn as Milton Berle's worthless brother-in-law -- especially his dancing with Barrie Chase -- "

"I'm you, remember? And I'm 13. Oh -- and the airplane flying through the Coca-Cola billboard."

Now -- let me tell you what I really enjoy about the film: The older I get, the more I appreciate Spencer Tracy's character, Captain Culpeper, who, Godlike, is following the race for the cash. He's about to retire and he's been trying to crack this case for years, and he's about to get his wish.

Look at that guy -- weatherbeaten and wrinkled, but still quiet and calculating. And still wearing a beaten-up old brown fedora -- the same one Jerry Lewis runs over at the beginning. It keeps getting crushed and Culpeper picks it up, pats it back into shape, plops it on his head of snow-white hair and keeps on going. He gets no respect from anyone -- not the police department, not his family -- and he starts to hatch a plan of his own for the cash. This is at just about the time everyone congregates at the Big W.

This is my favorite part of the movie.

I don't know if it's because of the resolution of the mystery, or the fact that we get to see everyone together and playing off of each other. I mean, just look at this lineup -- Sid Caesar, Phil Silvers, Terry-Thomas, Berle, Rooney, Shawn, Winters, Peter Falk -- and everybody seems so young! Well, except Spencer Tracy.

And you know what else I love? See the cab behind them? It's a 1959 Plymouth Belvedere, the same kind of car we had when I was a kid. I really don't have much of a memory of it because we traded it in when I was seven, so I just like seeing one.

"Can I talk now, old man from the future?"

"OK. I like this movie because it's big, loud and fast. It excites me and makes me want to learn more about movies. I can't even imagine a time where people can watch a certain movie or TV show any time they want, but that sounds great."

Yes, you'll like it. But avoid any TV show with the words "Real Housewives" or "Bachelorette" in the title. I love "It's a Mad Mad Mad Mad World" because it's a time capsule of Southern California in 1962-63 -- I like looking at the buildings and cars and billboards (there are several "Nixon for Governor" ones; he ran in 1962 and lost). The movie also helps me remember what it was like to be your age -- when my biggest worry was how I was going to do on the math test in Mrs. Wirth's class.

OK, fair enough. But you have a lot to look forward to -- and you'll be surprised how this movie keeps playing a role in your life. You'll have the pleasure of introducing your son and daughter to this movie. You'll make out at least once to this movie. And as you age and your perspective changes you'll look at it differently.

"OK, I'm looking forward to it. Just one more thing -- the acne clears up, right?"