It was Sunday, November 28, 1943, and there was trouble behind the scenes on "The Grape Nuts Flakes Program Starring Jack Benny."

The show would be live on the air within hours, and the show's female lead, Mary Livingstone, had laryngitis. And on a radio program there really wasn't a workaround for that. The real-life wife of Jack Benny, Livingstone was Benny's most regular on-air tormentor. Without her, at least half the show would be dead air. 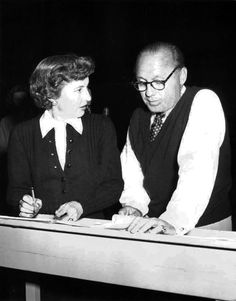 Jack Benny got on the phone. He had to find a substitute, and one person immediately and clearly leapt to mind:

Not just because she could handle the role -- she was Barbara Stanwyck, after all. But also because she was also extremely tight with Jack and Mary. Sure enough, she happily showed up to play Mary's part on short notice.

That, friends, is almost a textbook definition of a solid Hollywood friendship. And it symbolizes the bond between Stanwyck and Jack and Mary Benny -- one that led to Stanwyck's numerous guest appearances on Benny's radio show, and at least one TV sketch with Benny that would end up being a topic of discussion at the U.S. Supreme Court. 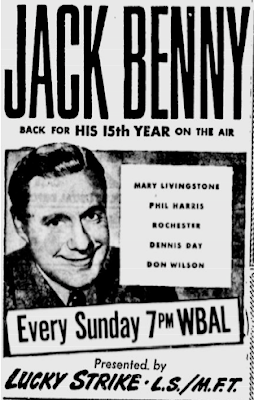 From 1934-55, Jack Benny's Sunday night show was one of the most popular on radio. To most Americans it was almost a religious ritual to check in with Benny, Livingstone, announcer Don Wilson, singer Dennis Day, comic Eddie "Rochester" Anderson and bandleader Phil Harris. It was a tight team and everyone had their place -- Livingstone needled Benny; Day sang a song in his Irish tenor and needled Benny; Anderson, as Benny's valet Rochester, played a "subservient" role and needled Benny; Harris told jokes about his drinking or his band's lack of talent and needled Benny; and Wilson did commercials for Lucky Strike cigarettes or Jell-O or Grape Nuts Flakes and needled Benny.

That was the key to Benny's success -- as talented a comic as he was, with a sense of timing honed by years in vaudeville, Benny was the straight man on his show. He was ridiculed as a ham, a miser, an egotist, a pedant and a lousy violin player. And he cried all the way to the bank. His hold on his Sunday night timeslot was so strong that when General Foods ended its sponsorship of Benny's show in the early 1940s, they gave him the slot to work with any other sponsor he chose. 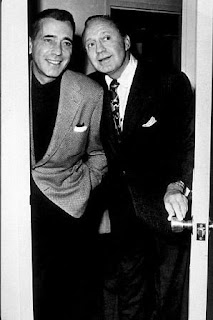 Despite his on-air image, Benny was a generous boss to his cast and to his writers -- whom he signed to long-term contracts, something unheard in the cutthroat world of radio. They repaid him with great work -- Hollywood stars who didn't usually do radio gladly worked with Benny because they knew the material would be great. Humphrey Bogart, Lauren Bacall, Danny Kaye, James Stewart -- they all made several appearances with Benny. (Bogart even made a very rare TV appearance on Benny's show.) From 1945-47, Ronald Colman and his wife Benita Hume were practically semi-regulars with Benny, playing themselves as Jack's put-upon Beverly Hills neighbors. At first, Colman was terrified of doing straight comedy, but Benny's encouragement and good scripts helped convince him.

Now back to Barbara Stanwyck. 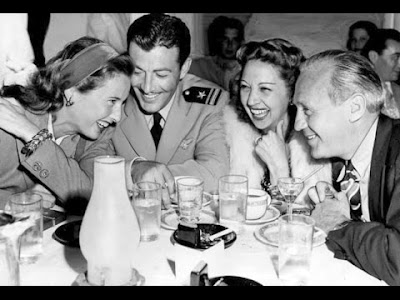 In real life, Jack and Mary Benny were close friends of Stanwyck and husband Robert Taylor. In her Stanwyck biography Steel-True, Victoria Wilson writes that Stanwyck's adopted son, Dion, was a playmate to Jack and Mary's adopted daughter, Joan. Wilson also writes that Stanwyck would visit the Bennys in Palm Springs, where she would sunbathe nude on the roof. (Makes you wonder if Billy Wilder had that in mind when he wrote Stanwyck's opening scene in "Double Indemnity.") Benny told interviewers that Stanwyck had the best sense of humor in Hollywood.

To make their connection even more complicated, Benny freely admitted that he appropriated his low-key comic style from Stanwyck's abusive ex-husband, Frank Fay, a leading vaudeville comic. When the major studios made their big talking revues in the late 1920s, Fay hosted the Warner Bros. entry, "The Show of Shows," while Benny was a co-host of MGM's "Hollywood Revue of 1929."

Although Benny made a handful of movies, including Ernst Lubitsch's "To Be or Not to Be," he did his best work on the radio. And some of Benny's best radio work consisted of parodies of current movies. We've detailed some of them in other blog posts, like "Dive Bomber" and "City for Conquest." On January 7, 1940, Benny burlesqued "Golden Boy," and Stanwyck went along for the ride. The storyline begins with Jack and Mary at the Biltmore Bowl, a dance hall where Phil Harris played with his band. They come across Stanwyck -- she's good friends with Phil Harris, but she mistakes Jack Benny for bandleader Ben Bernie. Still, Jack convinces her to appear opposite him in his production of "Golden Boy" and they schedule a rehearsal at Jack's house. Listen for yourself:


Wilson writes that Stanwyck refused to accept any payment for her performance, so Benny bought her a sable coat.

This episode is from what, to me at least, is Benny's funniest period, mostly because of the contributions of writers Bill Morrow and Eddie Beloin, who worked for Benny from the mid-1930s until 1943 and gave the show a fresh, eccentric flavor. The team broke up when Morrow was drafted, and Benny turned to a staff of four writers, most of whom would stay with him until the end of his career -- Sam Perrin, Milt Josefsburg, George Balzer and John Tackaberry. From the time of that switch, "The Jack Benny Program" became slicker, more self-referential and, in one guy's opinion, just a little stale, but the show was still a ratings powerhouse. When Benny jumped from NBC to CBS in 1949 for tax reasons, virtually all of his audience jumped with him.

In June 1953, Benny teamed with Stanwyck for a spoof of "Gaslight," called "Autolight," for his TV series, He had done the sketch on live TV in 1952, so this was simply a way of getting it on film. But once it was in the can, an unusual lawsuit was filed by MGM parent Loews, Inc. They argued that because the sketch incorporated the film's plot to an unusual degree, it went beyond being a parody and constituted "infringement and unfair competition." Benny and his sponsor, the American Tobacco Company, went to court, and the judge found in favor of Loew's. Arguing that the ruling would have a stifling effect on comics and comedy, Benny's lawyers took the case to the Supreme Court in 1957. The next year, the court upheld the lower court's verdict, and Benny knew he was beaten. He bought a seven-year "license to parody" from MGM and the sketch finally aired in January 1959, five and a half years after it was shot.

A couple of notes before you watch:

1. The cartwheeling girl who interrupts the sketch is part of a running joke introduced earlier in the show.

2. The man from Scotland Yard is played by Bob Crosby, who became the show's bandleader after Phil Harris left in 1952.

3. And while you watch, wonder if MGM maybe had a point -- the sketch includes a fair amount of the plot of "Gaslight," albeit infused with jokes about salami and horses in closets. Also notice Stanwyck's reference at the end to her friend, Mary Livingstone:
