CMBA Fall Blogathon: "Make Me a Star," or Tom Nix 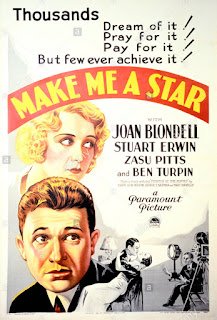 This is part of the CMBA Fall Blogathon: Hollywood on Hollywood! Check out all entries!

If "Merton of the Movies" isn't the first spoof of Hollywood, it comes close.

Harry Leon Wilson's 1919 novel about a naive small-town clerk who goes to Hollywood with a correspondence course in film acting under his belt and not much in his head was adapted for the stage in 1922 by George S. Kaufman and Marc Connelly. It was made into a movie in 1924 (with Glenn Hunter as Merton) and again in 1947 with Red Skelton in the title role.

In between, there was another version, 1932's "Make Me a Star." The cast alone is a Who's Who of early Hollywood -- Stuart Erwin, Joan Blondell, Ben Turpin, Ruth Donnelly, Zasu Pitts and Charles Sellon. William Beaudine directs -- a guy who began his career with Mary Pickford and ended it with the Bowery Boys.

We begin in the hamlet of Simsbury, two thousand miles and a world away from Los Angeles. Merton Gill (Erwin) is a rather preoccupied clerk who works for Mr. Gashwiler (Sellon) in the local emporium. Movies are on Merton's mind constantly, particularly B-grade westerns with humorless hero Buck Benson (Dink Templeton) -- so much so that Merton is given to whispering things to the horse pulling his delivery cart like "Let's get goin', Pinto, old pal -- we gotta make Red Gap before sundown."

Unfortunately, Merton's daydreaming leads to havoc at the store, what with messed-up deliveries and such. A frustrated Mr. Gashwiler finally gives Merton the boot and California, here he comes. 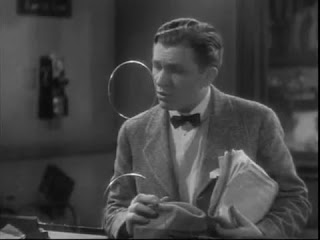 Merton goes directly to Majestic Studios, home of Buck Benson. He re-christens himself as Whoop Ryder and is befriended by stuntwoman "Flips" Montague (Blondell) and the studio's hard-bitten-but-kindly switchboard operator, The Countess (Donnelly). (One of the joys of this movie is listening to Donnelly say, in that testy manner of hers, "Now listen, Whoop.")

Flips helps Merton get a walk-on in a Benson picture; he blows his chance and is fired. But he won't leave the lot because he's afraid he'll never be let back in, and it's not like he has anywhere to go -- he's been kicked out of his apartment. By the time Flips sees him again, he's been sleeping on empty sets and is slowly starving. 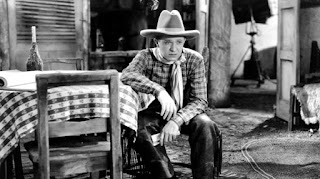 Flips stakes Merton to a meal and gets an idea -- because Merton is such a straight arrow, he would make a perfect parody of Buck Benson. She sells it to a Mack Sennett-like producer and filming begins. Just one problem -- Merton thinks he's making a straight picture. He hates comedies and can't figure out why the cross-eyed Ben Turpin (playing a guy named Ben) is playing his sidekick. 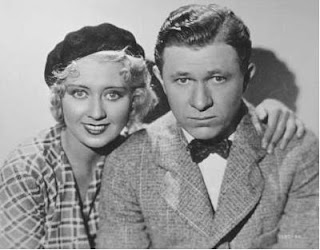 On the eve of the premiere, Flips feels guilty.
She's fallen for Merton -- she calls him Trouper -- and can't bring herself to tell him the truth. So he faces it himself -- a theatre full of people laughing at him. He comes back to Flip and bursts into tears.

By now you may be getting the idea that "Make Me a Star" isn't quite a romantic comedy, or a slapstick comedy, or really much of a comedy at all. And I believe at least part of the fault lies with Erwin -- he's too vulnerable as Merton. You pity him, which isn't a good look for a hero. He's also frustratingly dense and a bit pompous.

On the other hand -- and this may be accidental -- "Make Me a Star" illustrates what it takes to be a success in Hollywood: sometimes the price is that you leave your real self behind. The movie leaves us up in the air -- we don't know if Merton makes another Whoop Ryder picture or not. And we're never quite clear just what the self-assured pro Flips sees in Merton.

The 1947 remake of "Merton of the Movies" takes place during the silent era, which with its outsize personalities and exaggerated acting styles is much easier to make fun of. The way Skelton plays Merton is easier to make fun of, too -- he's a genial dope who wins a contest and comes to Hollywood. In "Make Me a Star" Merton has been dreaming of coming to Hollywood all his life, which makes his failure even more poignant. All in all, "Make Me a Star" has a wistful sadness about it, and dares to float the idea that a Hollywood career doesn't guarantee a happy-ever-after ending.