"Next Time I Marry," or Raising Kanin 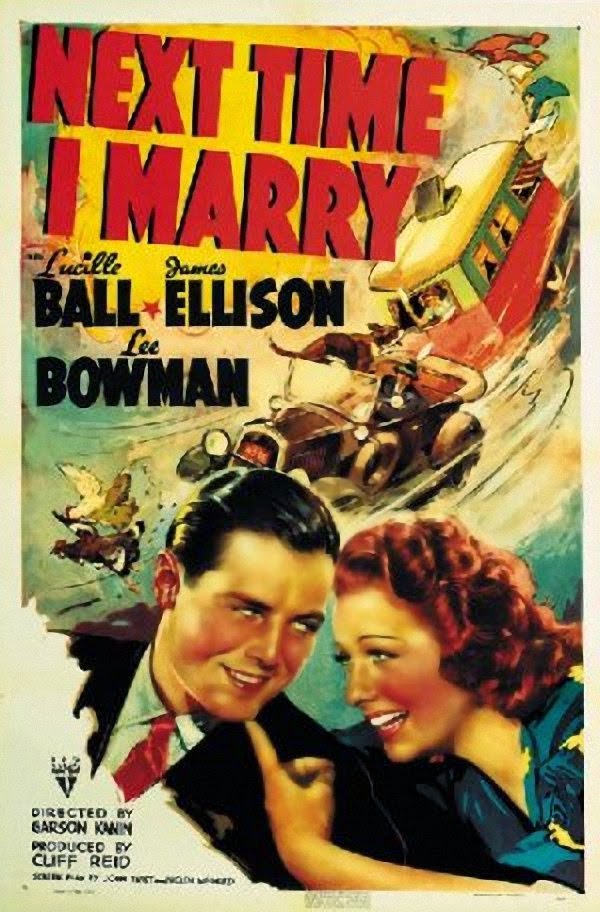 The 1938 film "Next Time I Marry" isn't, and shouldn't be, a standout on the resume of anyone involved. Not stars Lucille Ball or James Ellison, or supporting players Lee Bowman or Mantan Moreland, or even director Garson Kanin.

This is only Kanin's second film, and it offers several glimpses of the witty style he would demonstrate more convincingly in movies from "My Favorite Wife" to "Born Yesterday" to "Adam's Rib" to "Pat and Mike."

It also provides a nice showcase for Ellison, a leading man in the Joel McCrea mold who never achieved the same level of fame.

Ellison is remembered today, if at all, for playing Johnny Nelson, the sidekick of William Boyd in a series of Hopalong Cassidy westerns during the first half of the 1930s. By the late 1940s he was back in westerns again. But for a brief period, he played supporting roles in movies that were a cut above, like "Vivacious Lady," "Charley's Aunt" and "The Gang's All Here."

In "Next Time I Marry" he is Anthony J. Anthony, a forgotten man of the depression who is working on a roadside WPA project. Up pulls heiress Nancy Crocker Fleming (Ball) in her Duesenberg, looking for an instant husband. It seems that to inherit her fortune, she must marry a "plain American," and Tony Anthony seems as plain as anybody. Then her plan is to divorce Tony and marry her real love, the preening, freeloading Count Georgi (Bowman).

Tony's the freewheeling type -- he lives in a trailer he tows everywhere -- and he accepts Nancy's offer of cash. So they hie to the local justice of the peace, and Tony slips a ring on her finger that's made to hold car keys:

Nancy's scheme runs into the disapproval of her Uncle (Granville Bates, winding up for the kick at left), known as "Crock." He sees the Count for the four-flusher he is.

(Kanin must have appreciated Bates's comic ability -- he also cast him, to great effect, as the grouchy judge in "My Favorite Wife" who opens the movie by granting an annulment to Nick Arden (Cary Grant), whose wife Ellen (Irene Dunne) is presumed dead, and who closes the movie by granting a divorce to Nick because Ellen has turned up after all.)

"Next Time I Marry" is a road picture, and the travel begins after Tony and Nancy are married. She plans to head to Reno for a divorce, but Tony's pride won't let her make that move without him, so he "kidnaps" her and locks her in his trailer, and they both head to Reno. In retaliation, Nancy sets the trailer on fire, forgetting that she is in it. But Tony has everything in hand:


It isn't long before Count Georgi is in pursuit of Tony and Nancy, assisted by manservant Tilby (Moreland). The script isn't above some stereotypical humor at Moreland's expense, but there also is this very nice moment between Bowman and Moreland that involves interchangeable exchanges of "yassuh":


The group makes it way to the outskirts of Reno, where the Count hatches a plan. While Nancy distracts Tony, the Count will remove the license plate from the trailer, ensuring that Tony will be stopped by the law. Tony is about three steps ahead of the plan, but he's happy to let Nancy seduce him:


This movie marks the first time, I believe, that I actually laughed at Bowman in a movie. Seems like the guy almost always played the rival to the romantic hero, but here he's at least likably smarmy as opposed to just smarmy.

And what about Ball? Well, she smoothly steers her way through this movie in much the same way she did most of her films at RKO. She's the rock in this cast, totally committed to the role and the material. It's amazing to consider that by the time she hit television in 1951 with "I Love Lucy," she already had 18 years of film experience under her belt.

"Next Time I Marry" is available through the Warner Archive. Here's a preview: