Pre-Code vs Post-Code: "Outward Bound" and "Between Two Worlds" 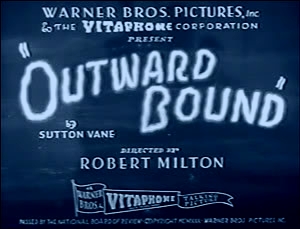 Sutton Vane's 1923 play "Outward Bound" takes place on a ship sailing to the hereafter, a kind of celestial branch of Carnival Cruise Lines where the passengers find out if their luggage is going to heaven or hell, and them with it. It was an unlikely stage success in London, and the 1924 Broadway production featured Leslie Howard, Dudley Digges and Beryl Mercer.

All three of them show up in the 1930 film version of "Outward Bound," though Howard's not in his original role; in the film, he plays the character played by Alfred Lunt onstage, and Douglas Fairbanks Jr. plays the role Howard played onstage.

To say the least, "Outward Bound" is a bit of an odd duck, and the 1930 film opens with three screens full of introductory text begging the indulgence of the popcorn chompers in the audience who might wonder why they're watching a movie about people who don't seem to know much about where they are or where they're going. We're told it's "an entirely new and different imaginative conception of life, death and the hereafter," involving "strange psychology and glorious sentiment interwoven between the lines," told with "deep sincerity." 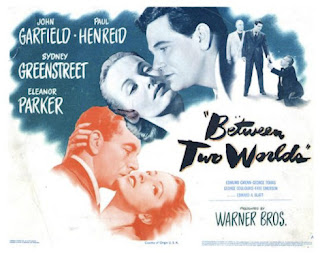 There's no such introduction in the 1944 post-code remake, "Between Two Worlds." Maybe that's because audiences were a little more sophisticated by then; also, the sad fact is that by 1944, almost everyone in the audience had lost, or knew someone who had lost, a loved one in World War II. The world was in flames -- it was easier to accept a movie about dead people. As a result, "Between Two Worlds" has a extra layer of poignance.

There are three main characters at the center of both films -- Tom Prior, a rather dissolute young man who, it's implied, drank his life away (Howard in the 1930 film, John Garfield in 1944); and a young couple who decide to commit suicide. The couple, named Henry and Ann in both films, is played by Fairbanks and Helen Chandler in the 1930 film, and Paul Henreid and Eleanor Parker in the 1944 film.

We open in London.

In the 1930 film, Henry and Ann are offing themselves because they're having an illicit affair and can't stand being without each other.

In the 1944 film, Henry is a concert pianist and a former member of the Free French -- he's like Victor Lazlo crossed with Liberace! Henreid-as-Henry can't get out of London because he can't get a visa and decides to end it all. When he opens the gas pipe, wife Ann -- You betcha they're married! No affairs allowed! -- stands staunchly by his side.

Then, before you can say "What do you want on your tombstone?," they find themselves sailing through a foggy night aboard a ship where the only crew member is a white-coated steward serving cocktails to the dead. Henry and Ann quickly figure out what's up -- in the 1944 film it's even more obvious because Ann had seen the other passengers earlier. They were all in a car driving to a ship when they were killed by an aerial bomb. In the 1930 film, we don't know how the other passengers met their deaths and came to be on board, but in "Between Two Worlds" the explanation, unfortunately, is all too obvious. 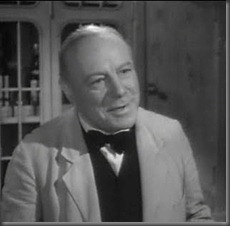 The passengers include rather unpleasant representatives of the British upper classes -- a stuffy matron (Alison Skipworth in 1930, Isobel Elsom in 1944) and a blustery, Trumpish tycoon (Montagu Love in 1930, George Coulouris in 1944). Then there's Mrs. Midget, a plainspoken member of the working class (Beryl Mercer in 1930, Sara Allgood in 1944) and the Reverend Duke, a timid priest (Lyonel Watts in 1930, Dennis King in 1944). They're all served by the steward, Scrubby (Alec Francis in 1930, Edmund Gwenn (at left) in 1944), an agreeable fellow who spills the beans about the passengers' final destination with the same line in both films: "We're going to heaven, sir. And hell, too. It's the same place, you see." 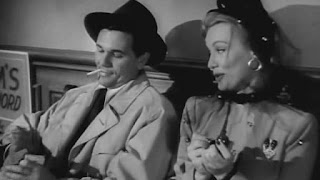 In the 1944 film, the ship looks as though it's floating through the clouds rather than fog. And it has a couple of extra passengers: George Tobias as a merchant seaman -- there's a war on, you know -- and Faye Emerson as a showgirl who's accompanying Garfield. There's also Gilbert Emery as the matron's put-upon husband -- he seems to be around mostly to emphasize how beastly his wife is.

In just about every way, the 1944 film unspools the plot with more clarity, and with more effective visual touches, than the 1930 film. It isn't that Robert Milton, the director of the 1930 film, doesn't try -- there are several striking expressionistic scenes impressively photographed by Hal Mohr. But in the 1944 film, with an adapted screenplay by Daniel Fuchs, the story is much more orchestrated and, in some cases, over-explained. (To really hammer the point home, Erich Korngold's score is full of "oooo-eee oooo-eee" moments of eeriness.)

The 1930 film is probably more faithful to the play and has a kind of pre-code take-it-or-leave-it simplicity. It doesn't feel the need to lay everything out so neatly. But it also takes its own sweet time in revealing the big twist that we've long since figured out. In the 1944 film, the twist is revealed in a more striking way -- Garfield-as-Prior knows the group is dead, and to get the point across to everyone else he stages a magic show that involves the tycoon: 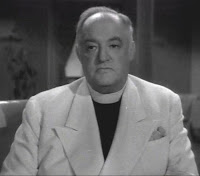 Once everyone on board realizes that the limbo contest really IS a limbo contest, it's time for the ship to sail into its heavenly port and for the "examiner," Thompson (Dudley Digges in the 1930 film, Sydney Greenstreet in 1944), to start processing the passengers. Thompson is gruff but kindly for the most part, and he doles out what might be called afterlife lifestyle packages the way the Wizard of Oz gives out hearts, brains and courage.

The tycoon tries, of course, to buy his way into heaven, and Thompson treats him with the contempt you'd expect: "You'll suffer ... as you've made others suffer. That's all." Same goes for the matron, but the 1944 version offers a nice twist -- Thompson gives her a luxurious home, but she can never have visitors. And her husband decides to ditch her and live with his lifelong friends instead.

Then comes Prior and Mrs. Midget. Prior is offered a place in a not-so-hot part of heaven, but it beats the alternative of a very hot part of hell. Mrs. Midget is given her lifelong dream -- a seaside cottage with a garden. But for some reason, she's more interested in staying with Prior as a kind of -- mom. Even if it means giving up her cottage. Thompson knows her secret, and in the 1944 version this leads to a beautifully played scene with Sara Allgood, who also played the family matriarch in "How Green Was My Valley":


The different ways that Howard and Garfield play the same character are direct reflections of their acting styles -- Howard is introverted and haunted, while Garfield is cocky and confrontational. Garfield's character also has more dimension -- he's a newspaper reporter (as was the film's producer, Mark Hellinger) who was fired for being too good at his job, namely in the exposes he wrote about our friend the unpleasant tycoon, a war profiteer.

The minister's realization is handled with a striking difference in the two films. In the 1930 film, we see him praying silently and solitarily. But in the 1944 film -- again, perhaps because there's a war going on -- religion is much more on display as he leads the other passengers in a prayer:


The 1944 film then comes to Musick, the seaman played by Tobias. In many ways his is the movie's most tragic story -- like many servicemen, he has died without being able to see his newborn daughter. He pleads his case to Thompson the examiner, and he seems pleased with Thompson's explanation that everybody has to die sometime, but the underlying sadness makes the scene ring hollow.

Finally, we come to the couples. In both films, they're the only ones on board who have attempted suicide. Because of that, we're told, they will remain on the ship as "half-way" passengers. But Henry keeps hearing something, and as the ship pulls away it's clear that he's being pulled back to life. Will Ann make the leap back as well?

"Outward Bound" has had a life on stage beyond the film versions. In addition to the 1924 Broadway production, there was a 1938 revival with Vincent Price, Laurette Taylor and Helen Chandler, reprising her role from the 1930 movie and undoubtedly giving it the same tremulous treatment. There was also a 2012 revival in London.

A Talk About James Cagney

I'm a fan of James Cagney. I've written about him here, here, here, here, here and here. To me he is one of a handful of movie stars with a real sense of physical style as well as acting expertise. Dan Schneider, the impresario behind the arts site Cosmoetica, graciously invited me and fellow film blogger Marilyn Ferdinand to talk about Cagney's life and career. Here it is: