A few weeks before Mary Tyler Moore's passing, my wife and I began revisiting episodes of her show, which ran on CBS from 1970-77. We were doing it for enjoyment -- they still stand out as some of the best sitcom episodes ever -- but we were also watching for a kind of emotional sustenance as we faced our first Trump Winter. 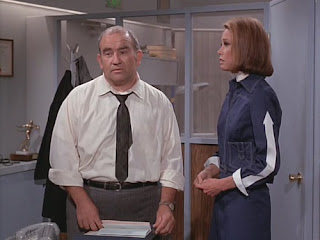 As we watched, it dawned on me that inside this sanctuary the show represents is yet another sanctuary -- Lou Grant's office.

It's a little cubbyhole of fake wood inserts, frosted glass and no ceiling, but it's Lou's confessional and a lot of significant things happen there. It's where Mary Richards has her job interview (Lou: "You've got spunk. I hate spunk.") and it's where Mary and Murray come for advice, and Ted tries to come for advice, and it's such a safe space that even Lou pours out his heart there every so often. In one of the episodes we watched the other night, "Will Mary Richards Go to Jail?," it's the only place Mary feels safe enough to 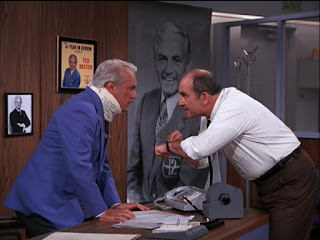 finally break down (in that funny-cry way Mary Tyler Moore had patented) about her fear of being incarcerated, as Lou tries his best to console her. It's also Lou's sacred sanctuary -- in "You Sometimes Hurt the One You Hate," we know Lou is really guilt-stricken about injuring Ted by throwing him through a door because he ends up letting Ted share his office.

The thing that I love about Lou's office, though, is that it's only a small part of the show's much larger heart. "The Mary Tyler Moore Show" endures -- and is reflected in the outpouring of sorrow over Moore's passing -- because, as the theme song always reminded us, love was all around. And it was all around because it was fostered by the way Mary treated people. In the first episode, there was someone who would have been easy to dislike -- Rhoda. She was abrasive and bossy, which was justifiable because Mary was displacing her from what Rhoda thought would be her apartment. Despite that beginning, they ended up as something very rare on TV at the time -- adult women who had a healthy friendship. 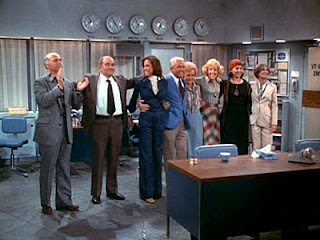 In fact, "The Mary Tyler Moore Show" was about friends who became family, in the best sense. Mary talked about it in the final episode, after Mary, Murray and Lou had gathered in Lou's office (of course) to learn they were being let go -- along with everyone else in the newsroom except Ted. Here's what she says: "Sometimes I get concerned about being a career woman. I get to thinking my job is too important to me, and I tell myself that the people I work are just the people I work with. And not my family. And last night I thought, 'What is a family, anyway? They're just people who make you feel less alone ... and really loved.' And that's what you've done for me. Thank for you being my family."

The humor on the MTM show came from the very hardest place to produce comedy -- from character. It came from recognizable people with common, if sometimes exaggerated, quirks. And for the times we are living in right now, like it or not, it's a reminder of our humanity when things seem to turn inhuman on a daily basis. Lou Grant's office is a reminder of that humanity -- a sacred place, that has nothing to do with organized religion, where people take care of each other. That's a message with special emotional resonance during this first Trump Winter.