The WHAS Crusade for Children, Take One

The 69th annual WHAS Crusade for Children took place earlier this month, raising over $5 million to support children with special needs in Kentucky and Indiana. For decades the Crusade has been a well-oiled fundraising machine, utilizing volunteers from across the region who do everything from holding benefit events to walking door to door for contributions.

The Bingham family, who owned WHAS when the Crusade began, well understood its standing as a community institution -- when they sold WHAS in the mid-1980s, they included a covenant that the subsequent owners could never cancel the Crusade. 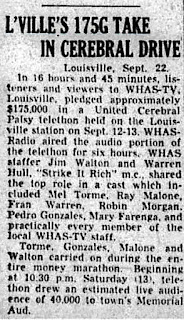 You're forgiven if the celebrities, aside from singer Mel Torme and tennis ace Pancho Gonzales, don't ring a bell. Ray Malone was a tap dancer who, a few years earlier, had been a regular on the NBC late-night show "Broadway Open House." Here he is with Dean Martin and Jerry Lewis. Fran Warren was a singer whose biggest hit was "A Sunday Kind of Love." Robin Morgan was 12 at the time -- she was a young actress who played Dagmar on the TV series "Mama." Today she's a poet and activist. I don't have the slightest idea who Mary Farenga is. 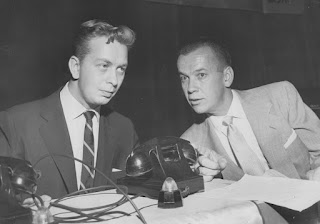 The telethon happened before my time, but I did hear one behind-the-scenes story about it. Legend has it that Mel Torme (seen here with Crusade emcee Jim Walton) got very upset when the crowd in Memorial Auditorium gave him only polite applause while they went crazy for Randy Atcher. Sorry, Velvet Fog, but there's no fighting the power of "T-Bar-V Ranch" -- at least not in Louisville.