My name is David, and I am a recovering baby boomer. I mention this to help explain the affection I have for movies made when I was a kid, especially from about 1957-65. You can tell me they're cheesy and cliched, and tell me that they reinforce negative stereotypes. I know, and the "intellectual" within me agrees with you, but the kid in me wants to see that cool car chase again. 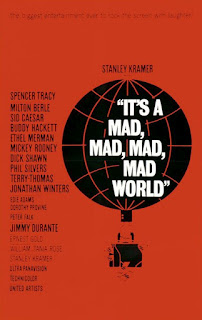 What all this brings me to is "It's a Mad, Mad, Mad, Mad World," the all-star, three-hour 1963 film that there really isn't any reason to like. It's bloated, overproduced, somewhat overacted and contains long unfunny sequences just made for your DVR remote's "skip" function.

The movie starts with a death -- the demise of small-timer Smiler Grogan (Jimmy Durante), who, one bright morning in the California desert, runs his black Ford off the highway and down a desolate hill. The motorists he sped past all stop to help -- dentist Sid Caesar and wife Edie Adams; failed businessman Milton Berle, wife Dorothy Provine and mother-in-law Ethel Merman; buddies Mickey Rooney and Buddy Hackett, headed to Vegas; and truck driver Jonathan Winters.

Just before he kicks the bucket (literally), the dying Smiler tells them of his long-hidden treasure -- $350,000, buried under a "big W" in a park several hundred miles from where they are. By the time police arrive, Smiler has passed, and the group members decide to keep the information to themselves. But they can't agree on how to split the loot, so it becomes every man for himself, and the race is on.

Watching all of this from Santa Rosita, the city where the money is buried, is police Captain Culpepper (a wizened Spencer Tracy), who has had Smiler followed in hopes of finding the money. With Smiler gone, Culpepper, godlike, follows the greed parade as it works its way toward Santa Rosita by car, truck, airplane, biplane, wrecker truck, jeep and even bicycle. 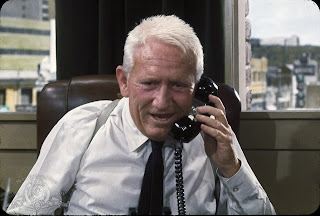 For all the mugging that comes from the cast of comedians, all of them at their peak of popularity, Tracy provides the movie's emotional core. The Grogan case is the one Culpepper's been trying to crack for years, and once he does he'll be ready to retire. But all that's waiting for him is a tiny pension, a crabby wife and an ungrateful daughter, so Culpepper's thoughts begin to turn larcenous. Tracy was an actor who could express volumes with a smile or a shift of the eyes, and he's in great form here, in what would be his second-to-last film. (Director Stanley Kramer had also worked with Tracy on "Inherit the Wind" and "Judgment at Nuremburg," and would direct his final film, "Guess Who's Coming to Dinner," with Katharine Hepburn and Sidney Poitier.) 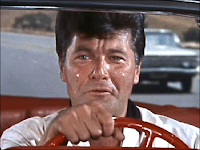 By the time the group makes it to Santa Rosita, the ranks have expanded to include Terry-Thomas, Phil Silvers, Peter Falk, Eddie "Rochester" Anderson and -- my personal favorite -- Dick Shawn as Merman's manic, moronic son, Sylvester.


Silvers does his patented con artist schtick, and Winters is great as the thick-witted trucker, but Shawn's comic intensity wipes everyone else off the map. (Shawn had such a reputation as a comic wild man that when he suffered a heart attack on stage in 1987 and died, the audience thought at first that it was part of the act.)

The script is by William Rose, an American expatriate who stayed in England after World War II, and he gives some trenchant commentary on America to British comic Terry-Thomas:

Other cameos in the movie include Jerry Lewis, Jack Benny, Carl Reiner, the Three Stooges, Jim Backus, Don Knotts, Arnold Stang, Marvin Kaplan and Ben Blue. And in the end, it's probably too much.

But here's how I watch "It's a Mad, Mad, Mad, Mad World." I start at the beginning and watch until Caesar and Adams are in a biplane going toward Santa Rosita. Then I skip until Jonathan Winters is conned by Phil Silvers and tears up a gas station in pursuit of him. Then I skip until Buddy Hackett and Mickey Rooney land in Santa Rosita and Culpepper's plan begins to come together as everyone converges at the park.

From there I watch until the end, including a scene where the great Buster Keaton spends a few seconds dodging speeding cars using the EXACT SAME MOVES he used forty years before in "Sherlock Jr." or "The General."

The kid in me loves the cars, the billboards (there are several "Nixon in '62" in the background, from when Richard Nixon was running for Governor of California and lost), the city streets and Ernest Gold's merry-go-round musical score. The adult in me loves -- well, it loves to see the kid in me have a good time.