A Tale of Two Johnsons: "The Front Page" and "His Girl Friday"

This post is part of the Journalism in Classic Film Blogathon, co-sponsored by Comet Over Hollywood and Lindsay's Movie Musings. 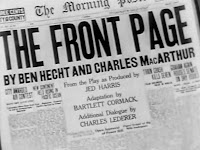 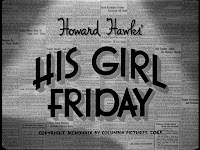 The difference between "The Front Page" and "His Girl Friday" is pre-code versus post-code, scene chewers versus scene stealers and, above all, Hildebrand Johnson versus Hildegarde Johnson.

Both films are love stories embedded in hard-boiled comedies about the newspaper business. But by turning ace reporter Hildy Johnson from a man in "The Front Page" to a woman in "His Girl Friday" -- and not just any woman, but the ex-wife of her boss, editor Walter Burns -- director Howard Hawks adds an extra dimension to the Johnson-Burns relationship while keeping the cynical tone of the original story.

Based on the play by Chicago-based reporters Ben Hecht and Charles MacArthur, "The Front Page" takes place in a city of big shoulders, a toddlin' town, a windy city that, on the advice of studio lawyers, isn't specifically named.

We are in press room of the Criminal Courts Building, on the eve of an execution. A cop killer named Earl Williams will be hung at dawn. There is lots of evidence that he is mentally ill, but there is also an election coming up, and the sheriff and mayor are determined to sacrifice Williams to win the law-and-order vote.

The 1931 film "The Front Page" goes right from opening credits to black humor on the gallows:

The 1940 film "His Girl Friday," on the other hand, begins with a reunion. Hildy Johnson (Rosalind Russell) is back in the newsroom of The Morning Post after a long vacation, which has included a divorce from the paper's editor, Walter Burns (Cary Grant). There are greetings all around -- Hildy is clearly a pro and has an easy camaraderie with her fellow ink-stained wretches.

Hildy, in a tailored suit and mannish hat, has returned for one last meeting with Walter:

Hildy has another surprise for Walter -- she's gotten engaged on her vacation, to a nice insurance salesman named Bruce Baldwin (Ralph Bellamy), and she's leaving the newspaper. For the first time in the movie, the fast-talking editor is speechless. But Walter gets the wind back in his sails after a few seconds, and then he insists on meeting Bruce:

In "The Front Page," we first see Hildy (Pat O'Brien) when he enters the press room, letting Walter (Adolphe Menjou) know via phone that he's leaving the paper to get married and to go into advertising in New York City.

The funny thing is, the relationship between Menjou and O'Brien's characters seems more romantic than the one between Russell and Grant. Menjou says things like, "so you're leaving me for marriage" and "I love you, you crazy mug." Even Peggy, Hildy's fiance, knows it: "You adore each other!," she says. On the other hand, "His Girl Friday" is, in the tradition of Howard Hawks's films, free of practically all spoken terms of endearment. Affection and attraction might be demonstrated in other, more visual, ways -- and in a Hawks movie, often dialogue that has nothing to do with love ends up having something very much to do with love. 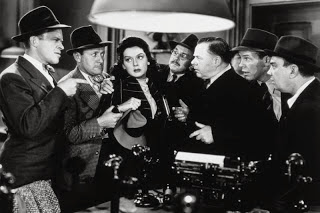 After the interlude with Walter, Hildy and Bruce, "His Girl Friday" also moves to the Criminal Courts Building. In both films, Hildy is surrounded by a wisecracking pack of character actors playing wisecracking reporters. In the 1931 version, the group includes Edward Everett Horton, Walter Catlett and Frank McHugh (as "McCue"). In the 1940 version, we have Roscoe Karns, Cliff "Ukelele Ike" Edwards and Regis Toomey.

We also have a more humanized look at the condemned man, Earl Williams, in "His Girl Friday."

With the promise of a nice commission for Bruce, Walter agrees to buy an insurance policy, so Hildy agrees to cover the Williams story. Hildy greases the palm of a prison guard to get a one-on-one interview with Williams (John Qualen) and we see two things -- that Hildy is a crackerjack reporter and that Williams is just plain crackers.

But before Hildy can write up her interview, Williams escapes. The reporters scramble to cover the story and Burns heads down to the press room to keep Hildy focused on the story and off of leaving with Bruce. To keep Bruce on the sidelines, Walter constantly sends trouble Bruce's way. (When he pays a woman to accuse Bruce of mashing so he'll get arrested, Walter describes him thusly: "He looks like that guy in the movies -- Ralph Bellamy.")

Maybe just to see if he can get away with it in an early talkie, director Lewis Milestone moves his camera whenever possible in the 1931 film. This circularly-staged scene, consisting of just a conversation between Hildy and Walter, makes you kind of dizzy:

Hawks's direction, of course, is completely the opposite. It never draws attention to itself -- he directs the cast instead of the camera. And in "His Girl Friday," especially, the cast does the heavy lifting, including overlapping dialogue that plays almost as if it's being ad-libbed. Watch this wondrous scene between Grant, Russell, Clarence Kolb as the crooked mayor, Gene Lockhart as the crooked sheriff, and the great Billy Gilbert as the guy delivering a reprieve for Williams -- someone the mayor and sheriff shooed away earlier:

(Another inside joke in that scene, as Grant's character refers to Grant's real name, Archie Leach. The 1931 film has plenty of names dropped as well, including "Judge Mankiewicz" and a guy in a speakeasy named Benchley.)

As faithful as the 1931 film is to the play, and as filled as it is with pre-code craziness, including one character giving the finger to another, I have to say I prefer "His Girl Friday." It represents smooth, expert Hollywood movie making in the best sense -- everyone involved, especially Grant and Russell, are hitting on all cylinders. It is the work of supremely assured craftsmen and performers, all moving at top speed. By comparison, Menjou and O'Brien -- especially O'Brien -- pitch their performances to the back row of the theatre.

You can see for yourself, since both films are in the public domain. Here's "The Front Page":


And here's "His Girl Friday":