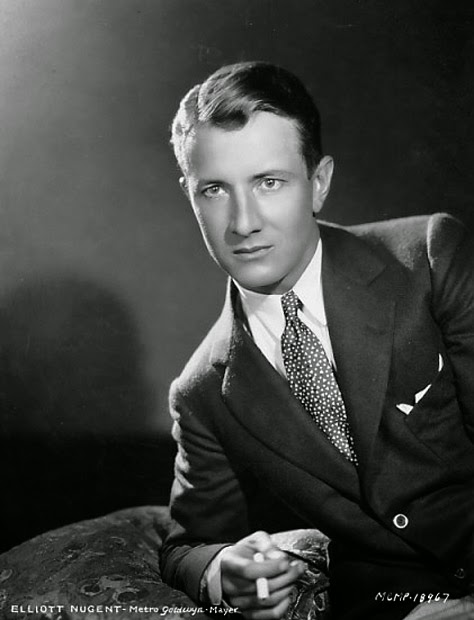 Actually, if Nugent's known at all today, it's probably more for his abilities as a director and writer than as an actor. He collaborated with longtime friend James Thurber (they were both from Ohio and attended OSU together) on "The Male Animal," a Broadway hit in 1940 that was turned into a 1942 film with Henry Fonda and Olivia de Havilland. (On Broadway, Nugent also starred, opposite a young Gene Tierney, and he directed the film version.)

Nugent also directed several above-average pre-code pictures, including "The Mouthpiece," "Life Begins" and "Three-Cornered Moon." And later in the 1930s and into the '40s he directed comedies with Harold Lloyd, Danny Kaye, Bing Crosby and Bob Hope. 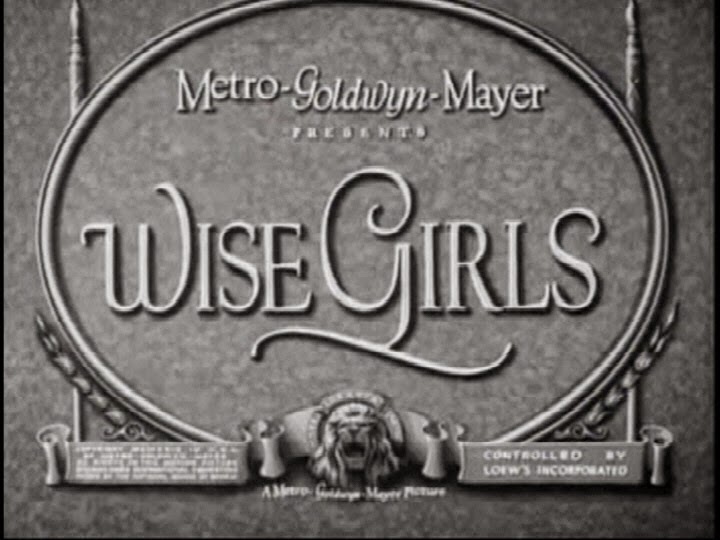 As an actor, Nugent was mostly at MGM. He played Marion Davies's fiancee in 1930's "Not So Dumb" and he played straight man opposite Lon Chaney and a gorilla in Chaney's only talkie, "The Unholy Three."

But Nugent's best performances onscreen tended to be in dryly comic roles, and the 1929 film "Wise Girls" offers a nice example. This is pretty much an all-Nugent show -- it's based on a play by Nugent and his father, actor J.C. Nugent, and it stars both of them. The staging is also attributed to them -- like a lot of early talkies it takes place largely on one set, with a static camera and lots of entrances and exits. Screen direction is by one E. Mason Hopper, who brings things to a deadly halt more than a few times. 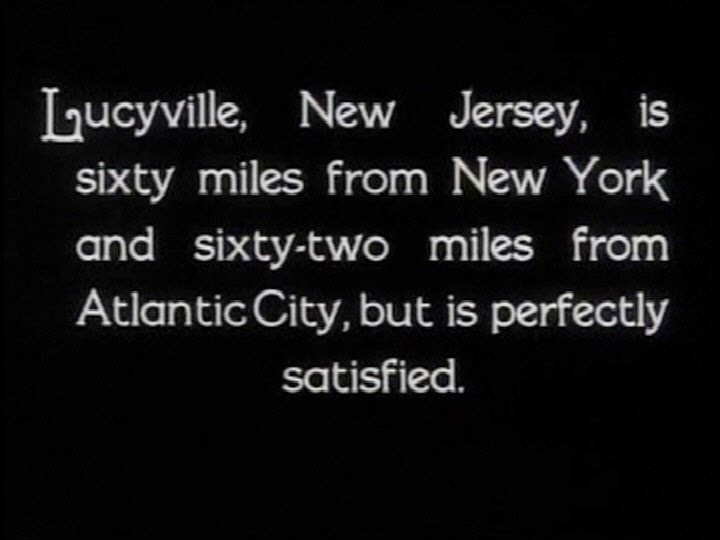 In other words, this is low-key humor in the style of The New Yorker, designed to elicit smiles more than belly laughs.

"Wise Girls" is a domestic comedy set in the Bence household. Dad Bence (J.C. Nugent) is irascibly, Fred Mertzian, comic. He's driven to distraction by the escapades of his grown daughters, particularly the highly strung Kate (Norma Lee), who's determined to be an artiste in the worst way, and is succeeding.

Kate's dalliances with the muse have included a book called "Angie's Temptation," and based on her pretentious manner we can easily imagine how good it is. Nevertheless, a local attorney named Duke (Roland Young) loves Kate so much that he has published the book for her, but she doesn't know he's involved -- she thinks it was bought solely on its own merit. The book was less than a best seller -- in fact, a bunch of copies were dumped at the local YMCA, where one resident, Kempy (Elliott Nugent), read the book and fell in love with the author.

In the course of about ten minutes, Duke and Kate have a falling out over her ambitions and Kempy, a plumber, shows up at the Bence house to fix a leaky pipe. Younger sister Ruth (Marion Shilling) discovers Kempy's love for the book and all parties involved, and she makes sure to introduce Kempy and Kate. Kate is still smarting from Duke's rejection, so she's more than ready for a new admirer:


The sudden marriage of Kempy and Ruth gives dad lots of reasons to sputter, and the elder Nugent has the character type down to a T. He's put out that his daughter isn't marrying the wealthy Duke, and he's convinced that Kempy is out for his money:


It takes, frankly, much more time than it should to establish that Kate and Duke belong together and that sister Ruth loves Kempy, and vice versa. "Wise Girls" is one of those early talkies that can be a real slog, but every so often you stumble across a scene with some bright dialogue. Here's another nice example, between Kempy and Ruth, who, admittedly, says her lines as if she learned them phonetically: 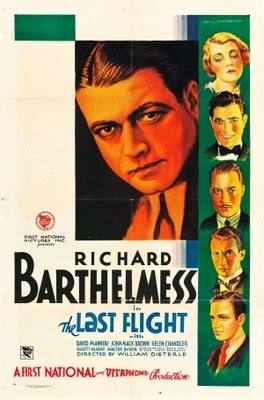 All's well that ends well in "Wise Girls," but 1931's "The Last Flight" is decidedly more downbeat. It was one of Nugent's last acting assignments for a while, and truthfully he's a bit shoved off to the side, fourth-billed under Richard Barthelmess, David Manners and Johnny Mack Brown. The four of them are shell-shocked pilots trying to drink away their trauma in post-World War I Paris.

"The Last Flight" is written by John Monk Saunders, who knew this territory -- he also wrote "Wings" and "The Dawn Patrol." In real life he was a flight instructor, although during the war he never got out of Florida. "The Last Flight" is a slightly weird but interesting mix of "The Dawn Patrol" and ersatz Hemingway. The four fliers speak in somewhat self-conscious declarative sentences in between cocktails. But this a pre-code movie through and through, unapologetic about its viewpoint -- you can't even imagine a studio remaking something like this until the 1950s. 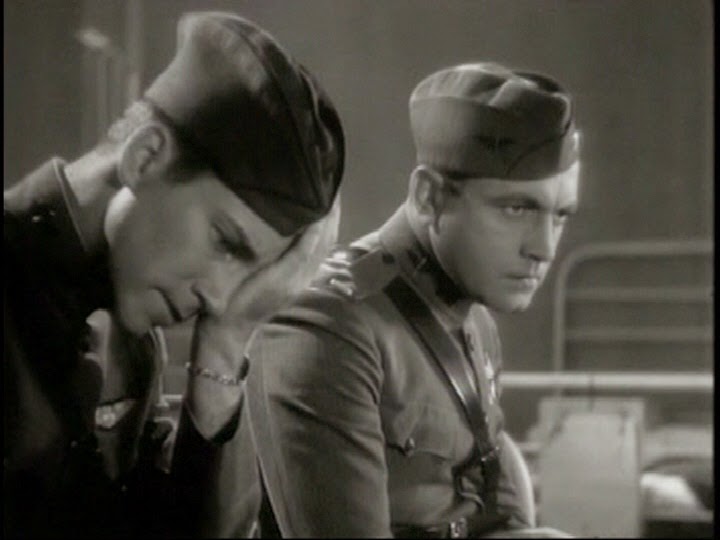 We first meet the men after Cary (Barthelmess) and Shep (Manners) have survived a serious plane crash. Cary's hands have been badly burned and Shep has a nervous tic in his eye that requires the wearing of really cool-looking smoked glasses.

The war is over, and they're being released from the hospital. Cary can't hold anything, but hey, no problem -- the doctor just tucks Cary's discharge papers into his armpit.

Then he watches philosophically as they walk away.

Doctor: Now they're out to face life -- and their whole training was in preparation for death. It's like dropping a fine Swiss watch on the pavement. ... They're spent bullets -- like projectiles, shaped for war and aimed at the enemy. Now they've fallen back to earth spent, cooled off, useless. ... What good are they?

Brown and Nugent round out the quartet as, respectively, Bill, an ex-football star whose laces have loosened a bit and Francis, a skilled marksman with narcolepsy. The plot thickens when the men meet Nikki (Helen Chandler) in a Paris bar. She wasn't in the war, but she can still match them quirk for quirk -- she keeps turtles in her bathtub and often says her lines while staring into space.

When Nikki sees Cary having to use both hands to hold his martini she thoughtlessly laughs, and then just as thoughtlessly pities Cary. Shep and Bill have to set her straight:


Nikki straddles the line between being vulnerable and annoying, but the men take her under their collective wing. She's especially attracted to Cary. Oh -- and there's a tag along, a creepy American reporter named Frink (Walter Byron) whose designs on Nikki are less than honorable.

Anyway, the group continues its bar hopping and committing assorted hi-jinks -- like when big Bill tackles a horse to prove he was an All-American. Again, Nugent doesn't get much meat in this movie. But there is one brief, good example, set in (where else?) a bar:


Following a sweet scene in which Cary and Nikki visit Pere Lachaise and the graves of Abelard and Heloise (Nikki ends up naming her turtles after them), we're off to Lisbon. Once there, much drinking ensues, along with visits to the bull fights and then a shooting gallery. What can go wrong?

A lot can go wrong, actually, including a final showdown between Frink and the boys. It happens at the shooting gallery, and, for the first time in the picture, it gives Nugent's character something to do:

With that exit into the darkness, Nugent also disappeared from in front of the cameras for a while. But his directoral trail leads from pre-codes to 1939's "The Cat and the Canary," the first of several pictures with Bob Hope, also including "Never Say Die" and "My Favorite Brunette." Nugent also directed Harold Lloyd in "Professor Beware," Danny Kaye in "Up in Arms" and Bing Crosby and Barry Fitzgerald in "Welcome, Stranger." And he directed the charming 1948 sleeper "My Girl Tisa" and the 1949 version of "The Great Gatsby" with Alan Ladd. He also returned to acting now and then -- he starred onstage opposite Katharine Hepburn in "Without Love" in the role that went to Spencer Tracy in the 1945 film.

(One last point about "The Last Flight" -- just after the movie came out, Saunders turned the story into a Broadway musical, "Nikki," with his wife, Fay Wray, in the title role. It ran about a month. Playing Cary Lockwood was a young actor named Archie Leach who appropriated the character's name when he went to Hollywood shortly thereafter. But people told him Lockwood was too long a last name, so he chose Grant instead.)

Oh -- and since Nugent's "My Favorite Brunette" is in the public domain, here it is: