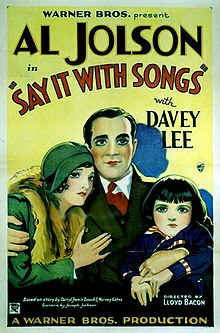 There is so, so, so much to make fun of in the 1929 film "Say It with Songs" that it's tempting to just kick back and start taking shots.

I mean, come on -- you have Al Jolson in full "world's greatest entertainer" mode, hamminess in overdrive, shoving his mug into the camera in what seems like every single scene, including one where he singlehandedly saves his son's life and restores his speech through pure Mammy power.

Finally, our man ends up in stir, the world's saddest convict, cheering up the other inmates with a passive-aggressive little ditty called "Why Can't You?" that includes these lyrics:

Violets from tiny seeds
Fight their way up through the weeds
Violets can do it
Why can't you? 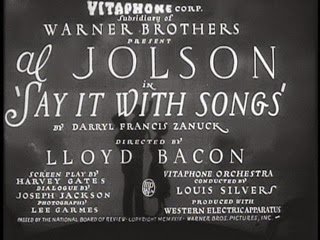 So there's a lot to make fun of in "Say It with Songs." And yet -- stay with me here -- this movie is not totally absurd. It actually offers just the slightest taste of what would be the future at Warner Bros.: the urban-based, tough-talking, fast-moving dramas, like "The Public Enemy" and "I Am a Fugitive from a Chain Gang," that the studio would be known for just a few years hence, all under the supervision of Darryl F. Zanuck, who gets top writing credit for "Say It with Songs."

Of course, it's a bug jump from Al Jolson to Paul Muni. (Adapts Jolson voice) But you can see the seeds -- the tiny seeds! Fighting their way up through the weeds! Mammy!

"Say It with Songs" is tailored to Jolson's, ah, unique style. Here he is Joe Lane, a singer on his way up at a radio station. The movie's first scene establishes the station's programming -- a combination of commercials, singers and health and beauty "experts":

But then there is Joe, who stands out like a sore thumb. He is on the way up, but he has his irresponsible side. This is demonstrated when he gets involved in a crap game at the radio station. This is further demonstrated when he promises his wife he'll meet her for a date and keeps her cooling her heels for two hours. She makes empty threats to leave him, but the love between Joe and Little Pal keeps her from pulling the trigger.

But soft! There is trouble behind the microphone. The station's unscrupulous manager (Kenneth Thomson, a cad once again) is making moves on Joe's wife Katherine (Marian Nixon), the very mother of Little Pal!

Katherine tells Joe about the passes, and he knocks the station manager silly. Unfortunately, the guy falls and hits his head on a lamppost, and he ends up seriously killed. And before you can say (with apologies to Johnny Cash) "Jolson Prison Blues," Joe is in the jug.

Meanwhile, on the outside, Katherine has sent Little Pal off to boarding school and she goes back to work for a doctor who's always loved her. To spare her from society's wrath, Joe tells Katherine he wants a divorce, giving Jolson the opportunity to act noble and victimized at the same time.

Then Joe is released from prison, and "Say It with Songs" really gets maudlin. We'll spare you the details because you can watch it online but here's the scene where Little Pal recovers, no thanks to a network of doctors, but because of fatherly egotism -- I mean, love:

A couple of facts about "Say It with Songs": The songs were by the writing team of DeSylva, Brown and Henderson, who also wrote the megahit "Sonny Boy" for "The Singing Fool"; as part of his deal, Jolson's name was added as a songwriter, entitling him to a share of that sweet royalty money. This is in addition to the $500,000 he received from Warners. Also, contrary to Wikipedia and other sources, "Say It with Songs" wasn't a flop -- it grossed more than $2 million, which placed it in the rarefied company of other pre-code Warner hits like "Noah's Ark" and "42nd Street."