Click here to read my review of the 1929 film "The Vagabond Lover." What follows is some background on the movie:

Before Bieber, before Timberlake, before Elvis and Sinatra and even before Crosby, there was Vallee. 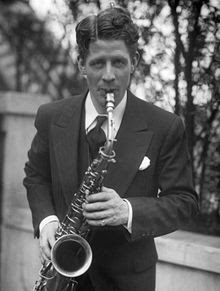 In the late 1920s, Rudy Vallee and his band, the Connecticut Yankees, were huge.  They were a top attraction at New York City nightspots and as part of the stage show at the Paramount Theatre, and their recording of “Honey” was the second-largest selling song of 1929. That same year, Vallee became the host of one of radio’s first variety shows, “The Fleischmann’s Yeast Hour,” which would run for 10 years and establish Vallee as a judge of new talent as well as a performer – he hosted the radio debuts of everyone from George Burns and Gracie Allen to Kate Smith to Milton Berle.

So 1929 was a very good year for Rudy Vallee, and the release of his first full-length film, “The Vagabond Lover,” was the icing on the cake. But as far as the movie reviewers of the time were concerned, Vallee was wise to keep his bandleader job.

“Little should be said for Rudy as an actor … he just isn’t,” sniffed Motion Picture News.

“When he is playing that old sax or crooning a love song he certainly is a little bit of all right, but when he’s acting, well, that’s another matter,” added Film Daily. 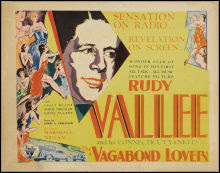 Vallee’s lack of expression – the fact that he reacts to every joy and crisis in the movie with the same wan smile – didn’t keep “The Vagabond Lover” from establishing a single-day box-office record at New York City’s Globe Theatre on Thanksgiving, 1929. It was one of RKO’s top-grossing films of the year, making a profit of $335,000 for the studio.

The film’s story is a rough parallel to Vallee’s career -- as a teenager, Hubert Prior Vallee started playing the saxophone and appropriated the first name of his idol, sax player Rudy Wiedoeft. In “The Vagabond Lover,” Rudy and his Connecticut Yankees are still small-timers; they have ventured to the Long Island estate of saxophone master Ted Grant, from whom they have been taking mail-order lessons, to get his blessing.

Alas, Grant is an egotistical jerk, and he rejects the band at the front door without even a tryout. Then Grant and his manager leave for the city, but Vallee and his Yankees don’t know that and they are determined to sneak into Grant’s mansion and play for him.

Enter Grant’s next-door neighbor, well-to-do culture vulture Mrs. Whitehall (Marie Dressler) and her niece Jean (Sally Blane, Loretta Young’s real-life sister). They have called the local constabulary to report the noise at Grant’s house, and Rudy is mistaken for Grant. Mrs. Whitehall then insists that the band play at a charitable event she’s hosting, and Rudy gives vague indications of being attracted to Jean. A happy ending looms, but not before Rudy and the Yankees (with comedy relief from Eddie Nugent) perform such numbers as “Nobody’s Sweetheart,” “A Little Kiss Each Morning” and, of course, the title song, which was co-written by Vallee.

And while the reviewers pooh-poohed Rudy’s acting ability, they had nothing but praise for his co-star, who was enjoying the beginning of a career revival.

After a long stage career and the occasional film, Marie Dressler was dipping her toe into the Hollywood waters again, gaining good notices for her role in the 1928 film “The Patsy” opposite Marion Davies. “The Vagabond Lover” was her first role in a full-length talking picture and triggered a career resurgence that included a role in Greta Garbo’s first talkie, 1930’s “Anna Christie,” and an Oscar for her work in “Min and Bill,” made the same year. Dressler then became one of Hollywood’s most bankable stars in the few years before her death in 1934.

At the same time, however, the audiences of young women weren’t coming to see Dressler, but Vallee. As a reviewer for Photoplay put it: “The kid may be no Barrymore, but neither can John sing ‘A Little Kiss Each Morning’ and bowl over the girls the way Rudy does.”