CMBA Fabulous Films of the '30s Blogathon: "G-Men," or Better Fed Than Dead 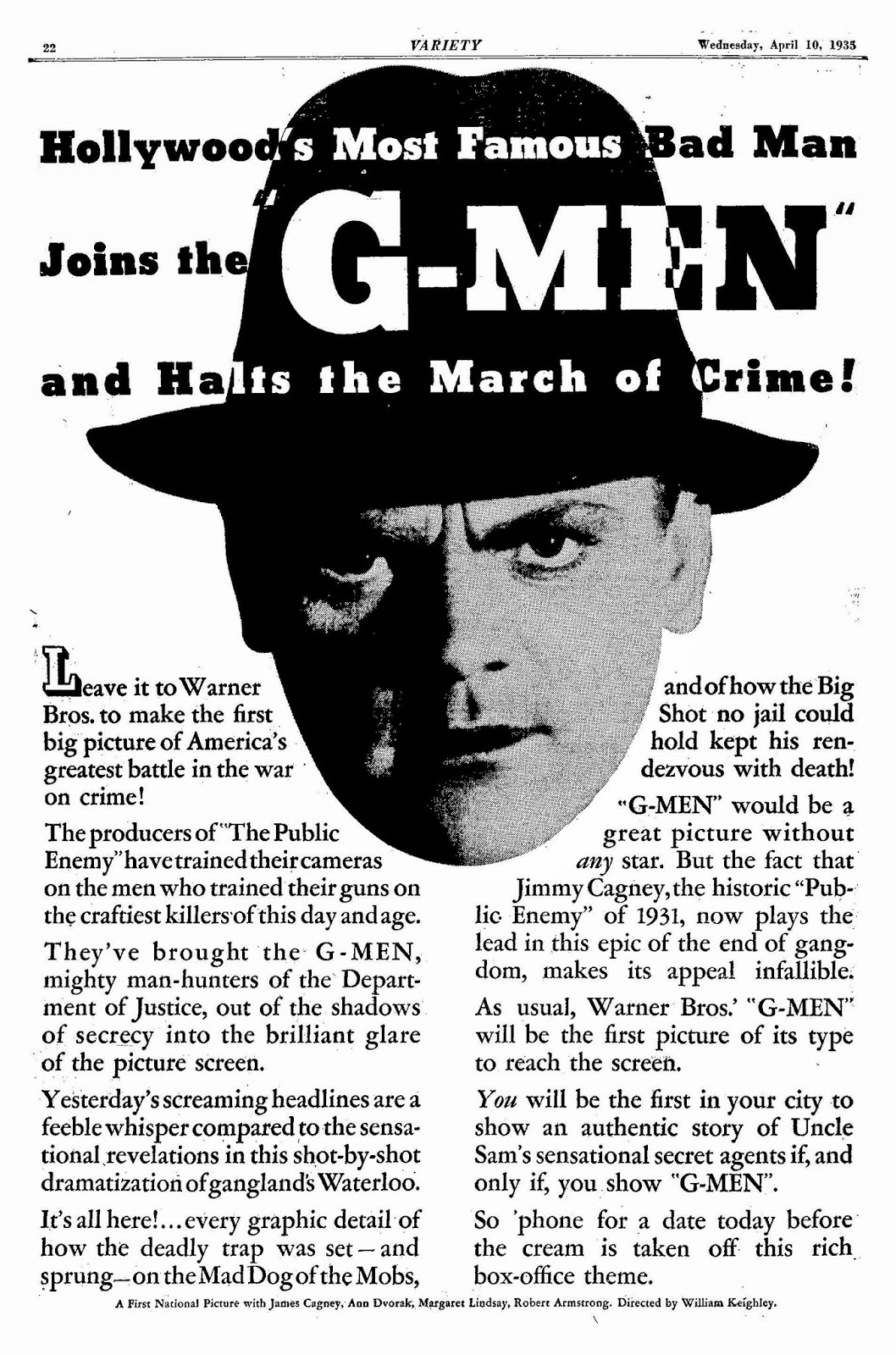 This is part of the CMBA Fabulous Films of the '30s Blogathon!

Hollywood's Most Famous Bad Man Joins the "G-Men" and Halts the March of Crime! -- ad for "G-Men" in Variety, April 1935

On May 23, Bonnie and Clyde were gunned down in Louisiana.

On July 22, John Dillinger bought it outside the Biograph Theatre in Chicago.

On October 18, Charles Arthur "Pretty Boy" Floyd -- who had become Public Enemy No. 1 after the death of Dillinger -- was killed in a cornfield near Clarkson, Ohio.

And on November 17, George "Baby Face" Nelson -- who had become Public Enemy No. 1 after the death of Floyd -- was wiped out in a showdown with FBI agents just outside of Chicago.

On the other hand, 1934 was a very good year indeed to be J. Edgar Hoover. 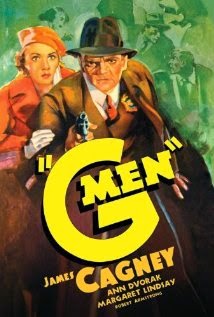 Hoover's genius for public relations -- and for self-promotion -- turned the tables on the "glamorous" gangsters who got all the headlines in the early 1930s. He created the idea of "Public Enemy No. 1" so that America could keep track of which gangsters were getting knocked off. He planted in the public imagination the idea that upright, incorruptible FBI agents were present at every shootout with every gangster, regardless of whether they were or not. And when George "Machine Gun" Kelly, surrounded in 1933 by FBI agents, said, "Don't shoot, G-Men!," Hoover eagerly promoted the nickname.

As a result of the headlines -- and also partly due to the desire of Hollywood studios to get on the right side of the Hays office in those days of more rigid enforcement of the Production Code -- by early 1935 gangsters were out and the Feds were in.

The first rush was to register the title "G-Men," and Warner Bros. beat Universal to the punch by just 24 hours.

Several studios had entries in the sweepstakes -- RKO's "The People's Enemy," United Artists' "Let 'Em Have It" and MGM's "Public Hero Number 1," among others.

But the winnah and champeen -- one of the highest-grossing movies of the year, in fact -- was "G-Men."

And the man playing the lead G-Man was the same guy who'd spent the last five years at Warner's shooting at cops, fighting at the drop of a fedora, doing a musical or two and pushing women around -- James Cagney.

As James "Brick" Davis, a lawyer who joins the FBI to avenge the death of a friend who was also an agent (Regis Toomey, gone in a flash), Cagney is as self-assured and as pugnacious as ever. Still, there's something muted about him -- he's tough, but he's missing that impudent edge that enlivened so many pre-code movies.

To its credit, the movie doesn't try to pass off Cagney's character as a straight arrow -- he's a street kid who got a college education courtesy of McKay, the local bootlegger (William Harrigan). But the guy expects no favors -- he wants Brick to follow his own moral compass. 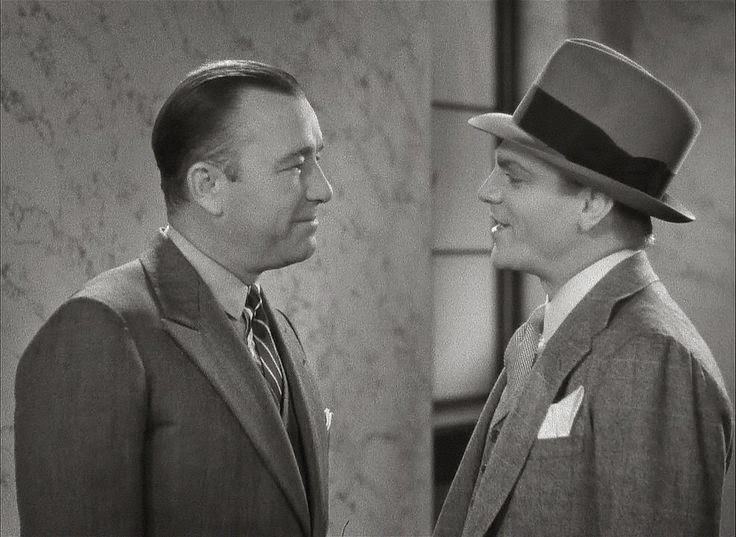 So, following his friend's murder, Brick leaves his moribund law career -- and his entertainer girlfriend (Ann Dvorak as a dvancer) behind. He goes to Washington and starts his training. To give the movie some conflict, the writers give Brick a frenemy in McCord (Robert Armstrong, seen at left), an FBI trainer who thinks that law school graduates like Brick aren't tough enough to be feds. Is HE in for a surprise! Oh, and Brick falls for McCord's sister (Margaret Lindsay). Is HE in for a ... oh, I already said that.

It just so happens that Brick's buddy was killed by the same gang that's high on the FBI's most wanted list, a group led by Collins (Barton MacLane). But the real target is triggerman Leggett (Edward Pawley), the guy who killed Brick's pal. And nobody gets away with that, see?

In the best Warner tradition, "G-Men" rips plot elements straight from the headlines. A train station ambush that sets Leggett free is based on the Kansas City Massacre, a 1933 bloodbath that involved the efforts of Pretty Boy Floyd to free prisoner Frank Nash. And Collins and his gang end up hiding out at a Wisconsin hunting lodge -- the same kind of place as Little Bohemia, where the feds tried and failed to catch the Dillinger gang in early 1934.

Brick's old bootlegger pal McKay owns the place, but he's a victim and is being held hostage by the gang. Also there is Brick's old flame, the dvancer. Since Brick has brushed her off, she's taken up with Collins -- with deadly consequences.

You can pretty much predict how "G-Men" ends, and when Brick ends up saving McCord's life in a shootout that captures the bad guys, McCord endlessly talks about what a great guy Brick is to anyone who'll listen. The movie is a kind of canonization of Cagney the hero and kicks off the second half of his busiest and most iconic decade. If his work doesn't have quite the same spice as his earlier performances, well, let's just chalk that up to being better fed than dead.

Here's a trailer from a re-release of "G-Men" from 1949, celebrating the 25th anniversary of the FBI: