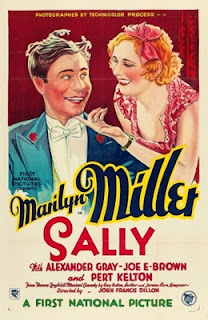 The 1929 film "Sally" is more than an awkward early talkie -- it's also a kind of time capsule, preserving the elements of an elaborate Flo Ziegfeld stage show and the winsome performing style of its star, Marilyn Miller, who appeared in Ziegfeld shows and reviews from 1918 through the early 1930s.

"Sally" is based on the Ziegfeld success that ran from 1920-24, including a world tour and a final series of performances back in New York City. Miller appeared in a 1925 film version as well as this one, for which she reportedly received the record-breaking salary of $100,000 -- roughly a thousand dollars per hour of work.

Sally Bowling Green works as a waitress in a Manhattan hash house. She's an orphan who was abandoned at the offices of the Bowling Green telephone exchange, hence her name. Her dream is to be a dancer, but in the meantime she's the world's worst waitress.

Sally strikes up a friendship with Blair Farrell (Alexander Gray), a society swell who always stops outside the restaurant and waves at Sally inside. Alas, Blair is betrothed to another rich woman and is bound by family pressure.

When Sally messes up one too many orders of flapjacks, she is bounced from her job and ends up as a waitress at the Elm Tree Inn, a roadhouse managed by the gruff-but-kindly Pops (Ford Sterling). Sally's co-worker and buddy is a waiter named Connie (Joe E. Brown). In real life he is the Grand Duck Constantine of Czechoslovenia and Pops, a native of the same country, keeps Connie on the job out of loyalty.

Blair has been looking all over for Sally, and when he finds her at the Elm Tree Inn they don't waste much time before breaking into the show's big number, Jerome Kern's "Look for the Silver Lining":


Miller and Gray make an appealing pair, although his singing style doesn't date as well as Miller's. Her dancing style is pleasant, as well -- she actually seems to be having fun and doesn't stomp with the joyless passion of a Joan Crawford or a Ruby Keeler. One of the movie's highlights is this charming eccentric dance that Sally does with Connie:


Blair is in love with Sally, and as one of the Elm Tree Inn's best customers he persuades Pops to let Sally perform for the patrons. She is a hit! Hooper, a big time agent (T. Roy Barnes), happens to catch Sally's act, along with his frail, Rosie (Pert Kelton, forever known in trivia circles as the first woman to play Alice Kramden in "Honeymooners" sketches). Hooper hires Sally to appear at a high society soiree but she must pretend to be a Russian entertainer. Why? Because if she doesn't, there's no third act.

Originally filmed in two-strip technicolor, "Sally" exists now only in a black-and-white print with just a moment of two of recovered color footage. Here it is, from a number called "Wild Rose," with Sally doing her Russian act:


As a result of her appearance, Sally signs a big contract with Flo Ziegfeld and Blair disappears. Cut to Sally's opening night on Broadway, and a big old production number with dancers dressed as butterflies:


After the show, all of Sally's old friends come backstage to congratulate her, but Blair is nowhere to be found -- or IS he??!?!

Miller was a huge star on Broadway, but only made three films, with "Sally" being the first. She returned to the stage after the third film, 1931's "Her Majesty, Love," and died in 1936 of a sinus condition. She was 37.