"The Animal Kingdom," or Fie, Society

To steal a line from his best-known work, "The Philadelphia Story," Philip Barry's plays were often about "the privileged class enjoying its privileges." But they also showed the other side of the coin: how easy it was to lose your self-respect -- and yourself, for that matter -- by getting caught up in living a life based solely on societal obligations and other people's expectations.

In Barry's "Holiday" and in "The Animal Kingdom," the 1932 film based on Barry's play, the expectations come from fiancees.

As "The Animal Kingdom" begins, Tom (Leslie Howard) has just gotten engaged to Cecilia, aka Cee (Myrna Loy). He is a proud iconoclast from a wealthy family -- he publishes limited-edition books, lives in a small (but elegant) house and prefers a simple life, with his household needs met by Regan (William Gargan), a former prizefighter who is his butler and friend.

Tom's love life has been nontraditional as well -- for years he lived with Daisy (Ann Harding) in a no-strings relationship based as much on the compatibility of their souls as it was on sex. Cee knows about it and seems very broadminded about the whole thing.


Tom (about Daisy): Well, we've been everything possible to each other, of course, but...

Tom: ...at the same time free as air. I mean, there has never been a feeling of conventional responsibility towards each other's involvement.

Cee: I can understand that.

Tom: Can you, Cee? 'Cause I never could.

But now Tom is committed to marriage.

Tom: We must make a grand go of it.

(Sounds a little like Katharine Hepburn talking to herself.)

Daisy has just gotten back in town and doesn't know Tom is engaged. He goes to tell her, but she has news of her own -- she's ready to marry Tom:

Daisy: Behold, the bridegroom cometh. And no oil for my lamp, as usual. A foolish virgin me. Well, foolish anyway. 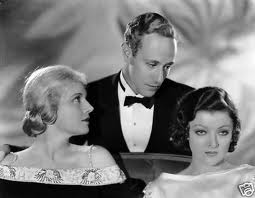 The breakup is devastating to both of them because it also marks the end of a great friendship. Tom would like to stay friends, but Daisy is honest enough with herself to know she can't handle it.

We move forward a few months, maybe a year. Tom and Cee are now married, Daisy has decided to start painting and has her first showing scheduled. At home, Tom is starting to deal with those obligations -- Cee wants him to fire the rough-edged but good-hearted Regan. And he's bowed to her wishes and started publishing badly written, but successful, novels.

Tom dodges the bullet with Regan, who leaves on his own for another job. ("I feel somehow my luck's going with him," he tells Cee.) And he wants to go into town for Daisy's opening. Cee isn't keen on the idea -- she thinks Tom should just send a congratulatory telegram -- but she doesn't come out and say so. She has other ways of keeping Tom from leaving:

More time passes, and Cee is pressuring Tom to accept a buyout offer from a larger, mass-market publishing company. And she wants to move into the city and share the family mansion with Tom's domineering father. She also decides to meet the Daisy problem head on by inviting her out to the country for Tom's birthday. Daisy comes, and despairs over the change in Tom. She and her friends leave abruptly.

The film's final sequence is beautifully played by Howard and Loy. It's finally beginning to dawn on him that if things change, it will only be for the worst. They have an intimate supper in a sitting room -- a room that reminds Tom of his visits to a London bawdy house where you left your payment on the mantle. Cee doesn't like the comparison -- she wants Tom to "behave" and give in to her vision for their lives together. Tom doesn't explode, but you see the awareness dawning on him. Cee and Tom drink some champagne and Cee starts giggling about feeling naughty. She goes to the bedroom to wait for him. Tom takes out the birthday check he received from his father, for a sizable amount:

"The Animal Kingdom" deals with such pre-code subjects as cohabitation, prostitution and at least attempted adultery  The performances are uniformly fine -- Howard and Gargan are reprising their stage roles, as is Ilka Chase as one of Cee's silly rich friends. Harding is the free-spirited one here -- she played a similar character in the 1930 film version of Barry's "Holiday"; in the 1938 film version of "Holiday," Hepburn would play the role.

For once, Loy is the odd woman out, but hey -- since she's Myrna Loy, she's perfect. Just consider the range of her roles in 1932 -- as a mixed-race murderess in "Thirteen Women," an amorous countess in "Love Me Tonight," and the villain's hopped-up daughter in "The Mask of Fu Manchu."

The scenes with Tom and Daisy have great wit and heart, as do the scenes between Tom and Regan, who loves Tom almost as much as Daisy does. It's easy to see why Hepburn and Barry worked together so often -- he was writing of a world she knew intimately, and she was the Tom figure within her own family.

Here are the complete credits for "The Animal Kingdom."