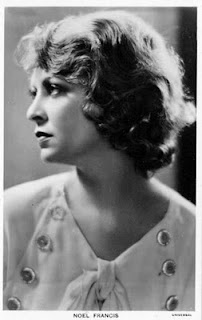 Not to be confused with Noel Madison, who was a guy, Noel Francis was an attractive blonde with a winsome expression. She had been a dancer on Broadway, appearing in the Ziegfeld Follies during the mid-1920s, often with the comedy team of Wheeler and Woolsey. She came to Hollywood in 1929 and ended up being signed to a contract at Warner Bros. 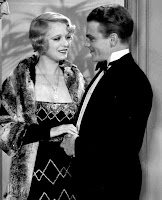 Her best-known film credit is probably 1932's "I Am a Fugitive from a Chain Gang." She plays a prostitute who James Allen (Paul Muni) meets after his first escape from the gang. Her appearance is brief, but memorable: 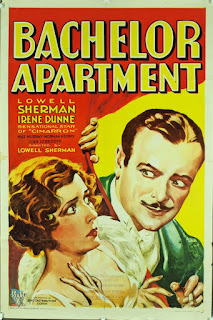 Francis was rarely the female lead; she usually received fifth or sixth billing. In the 1931 film "Bachelor Apartment," for example, she is one of several women who are seduced by the film's hero, Lowell Sherman, who also directed. Sherman plays Wayne Carter, a bachelor whose apartment is just busting with women -- the movie is like a pre-code "Boeing Boeing." When the taxi Francis's character is riding in gets involved in an accident, Sherman -- who has been eyeing her from his limousine -- sweeps in and scoops her up:


Once Sherman gets Francis back to his bachelor apartment, he "accidentally" spills a drink on her dress, forcing her to change into something more comfortable:

Sherman has an impish comic quality and he's always fun to watch -- he also played the dipsomaniac director who discovers Constance Bennett in "What Price Hollywood?" -- and the film's storyline has him leaving girls like Francis behind so he can marry his proper stenographer, played by Irene Dunne. 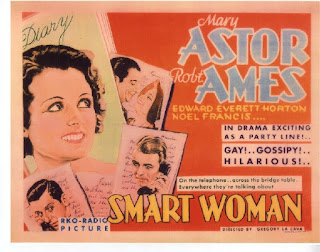 In "Smart Woman," also released in 1931, Francis has a more substantial part. She's Peggy, the other woman who Mary Astor's husband (Robert Ames) has taken up with while Astor was with her sick mother in Paris. Gracefully directed by Gregory La Cava, "Smart Woman" is more comedy than soaper, thanks largely to the presence of Edward Everett Horton as Astor's husband's business partner. Astor decides to fight fire with fire, and invites the mistress and her mercenary mother to a weekend at the family estate; then she enters, carrying lawn shears:

Astor also tries to make her husband jealous by implying that she's been having an affair of her own with the kind Sir Guy (John Halliday), a British millionaire she met on the cruise back from Paris. But when Peggy learns of Sir Guy's fortune, she sets her cap for him:

It's too easy to blame the decline in Francis's career on the advent of the Production Code in 1935, but it's true that under the Code, parts like the ones Francis played were frowned upon. At any rate, by the mid-1930s, her career had declined to the point that she was appearing in quickie Buck Jones westerns and her final feature was 1937's "Left-Handed Law."

Here are the full credits for "Bachelor Apartment" and "Smart Woman."