Years from now, when scholars are trying to understand the success of the comedy team of Olsen and Johnson, they will take a look at their 1931 film "Fifty Million Frenchmen" and gain practically no insight at all.

The team experienced phenomenal success on Broadway, where their comic revues "Hellzapoppin' " and "Sons O'Fun" -- filled with risque sight gags and physical comedy -- ran for years. But their free-wheeling style doesn't exactly translate to the screen, and even if it did, "Fifty Million Frenchmen" would still be a very weird duck.

Based on the 1929 Cole Porter stage success (directed by Monty Woolley), "Fifty Million Frenchmen" was filmed as a Technicolor musical in 1930. But by the time it was released, musicals were judged to be out of style (a few months later, "42nd Street" would become a smash and musicals would be in again), so all the numbers were removed -- although you do hear hints of Porter's "You Do Something to Me" and "You Don't Know Paree" on the soundtrack. And the Technicolor prints have disappeared, so the only example we have of the film today is in black and white. AND Olsen and Johnson are shoehorned into the show -- their roles did not exist in the Broadway production. 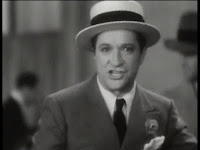 The nominal hero is William Gaxton as Jack Forbes, a millionaire's son who is in Paris because "father seems to think his business in America is better if I'm over here." Gaxton seems to be the world's oldest juvenile -- he was in his late 30s when the movie was filmed, and he's supposed to be at least ten years younger. Gaxton is repeating his Broadway role, literally -- he's still playing to the balcony.

Meanwhile, here come Olsen and Johnson as Simon and Peter, two bumbling detectives. Chic Johnson is the taller of the two, with a sharper voice, and Ole Olsen's trademark is an irritating, mirthless laugh:

(Funny how Olsen's laugh calls to mind Joe E. Brown's (much funnier) laugh in "Some Like It Hot," a (much funnier) film where Brown, too, uses the word "zowie." Hmmmm.)

Anyway, Jack has fallen for a young woman, but his friend Cummings (John Halliday) bets him $50,000 that Jack can't win the girl on charm alone. So Jack gives up his wealth for two weeks. And Cummings hires Simon and Peter to keep an eye on Jack.

As for Jack, he goes to work as a tour guide at the American Express office, where he meets Violet (Helen Broderick), a thrill-loving tourist who's come to Paris "to be insulted":

Then, in an unusually tedious plot turn, Simon and Peter are mistaken for two businessmen and become the targets of two prostitutes. Then the real businessmen show up, blah blah blah. Jack helps Simon and Peter hide out, and they disguise themselves as a magician and his assistants. They're performing the old stick-the-swords-into-a-box trick, but the setup is funnier (relatively speaking) than the trick itself:


Most everyone here would go on to do better (or at least more successful) work -- Gaxton would appear in the Broadway productions of the Gershwin shows "Of Thee I Sing" and "Let Them Eat Cake," paired with Victor Moore, with whom he would form an occasional comedy team into the 1940s. Broderick (Broderick Crawford's mother) would end up as the wisecracking friend in the Astaire-Rogers musicals "Swing Time" and "Top Hat." And Olsen and Johnson would always have Broadway.

As for "Fifty Million Frenchmen," nothing exposes the rickety plot of a musical comedy like cutting all the numbers -- after 70 very long minutes, Jack wins his girl and the bet, and gives the reward to Simon and Peter. And scholars will continue their search for the well-hidden secret of the appeal of Olsen and Johnson.

Here are the film's complete credits, and a preview: