"The Story of Temple Drake," or Oh Brothel, Where Are Thou? 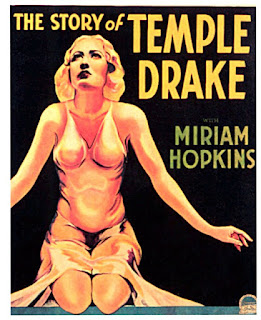 Around about 1932-33, Miriam Hopkins achieved what we might call a pre-code movie hat trick by appearing in three notorious examples -- "Trouble in Paradise," "Design for Living" and "The Story of Temple Drake."

The latter film, especially, is credited with being the straw that broke the pre-code camel's back, leading to the formation of the National Legion of Decency and the enforcement of strict movie censorship that would last until the mid-1950s. And even from the vantage point of 80 years, "Temple Drake" still packs a punch. Its lurid story deals with all kinds of pre-code hot button issues -- rape, incest, prostitution, illegitimate children, murder and agriculture.

We open down south in Dixon County, where Temple Drake (Hopkins) lives. She's a rich ninny -- the silly granddaughter of a local judge (Sir Guy Standing) who uses her beauty and his status to get pretty much anything she wants. Her life is a merry social whirl -- big parties! Late night revels! Formal dances with Grady Sutton!

Judge Drake is a respected figure, but he's not above sharing a shot of sour mash in his chambers between trials. And he's concerned about Temple's wild ways, but when she tells him not to worry, that the man she's out carousing with attends the judge's alma mater, he calms down.

Temple actually does have a secret love -- local attorney Stephen Benbow (William Gargan), who's noble enough to act as a public defender for those too poor to afford representation. At a ritzy party, Temple confesses to Stephen about her feelings for him, but she also talks about her untamed wild side. It's like the original "It isn't you, it's me" speech:

And once she confesses to Stephen, Temple goes back to the wild side of her personality, leaving the party to go for a joyride with Toddy (William Collier, Jr.), the drunken college boy from the judge's old school. Then there's an accident, and Toddy and Temple end up stranded at an abandoned plantation that looks like Scarlett O'Hara's place after the Civil War. 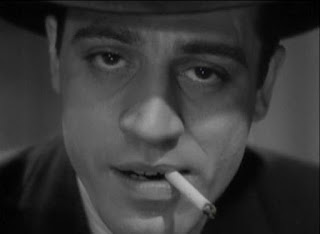 Living in the crumbling house is a motley crew -- bootlegger Lee Goodwin (Irving Pichel), slow-witted Tommy (James Eagles), Goodwin's common-law wife Ruby (Florence Eldredge) and their baby, and, most dangerous of all, the predatory Trigger (Jack LaRue), a small-time hood.

A storm is raging outside, and Temple is totally at sea -- for the first time in her life, she's trapped in a world where "I'm Judge Drake's granddaughter" doesn't mean anything. She tries to protect herself by staying with Ruby and her baby, who's sleeping in a wood box in the kitchen.

Temple: Why do you keep the baby in a wood box?

Ruby: So the rats won't get it.

Temple finally goes out to the barn and falls asleep in the corn crib. The simpleminded Tommy watches over her. But the snakelike Trigger is persistent, and we know there's trouble brewing when we see his shiny street shoes sliding across the hay-covered floor:

Trigger kills Tommy and attacks Temple, and then he and a shellshocked Temple drive over a county or two and take up residence at Miss Reba's House of Ill Repute, Inc. It's interesting to look at the music on the soundtrack at this point -- up until now, Temple's trials have been punctuated by a nondescript orchestral score, but once we get to Miss Reba's all we hear in the background is a honky tonk piano. And somehow, it makes things seem even more nightmarish:

Meanwhile, back in Dixon County, the official story is that Temple's away visiting relatives. And Stephen remains the sole defender of Temple's honor, going into men's rooms and wiping "Temple Drake is just a fake/She wants to eat and have her cake" off the walls.

Then Lee Goodwin is charged in the murder of Tommy, and Stephen becomes his attorney. He sets out to find eyewitnesses. His trail leads to Trigger, and he's shocked to see Temple shacking up with him. Temple places herself between Trigger and Stephen to keep Trigger from shooting him, and tells Stephen she loves Trigger. Stephen leaves and Temple decides she's had enough. She puts on her hat to leave, but Trigger blocks her and starts pushing her around, and she shoots him. Then she tries to leave, but she realizes he's holding her hat:


Temple makes her way back to Dixon County, where Stephen calls her as a witness in Lee Goodwin's trial. But they both know that if she tells the truth, her reputation will be ruined. "Give me a chance to live it down," she pleads to Stephen -- and he has to decide whether he will serve justice or spare the woman he still loves.

"The Story of Temple Drake" is based on William Faulkner's novel "Sanctuary," and considering what it couldn't include from the book, it very effectively retains the Southern Gothic flavor of Faulkner. Hopkins must have drawn from her experience as a native of Savannah, Georgia in conveying Temple's lethal charm.

And props, please, to Jack LaRue, who was given the part of Trigger when George Raft refused it. In a career of thankless roles, always as the bad guy, he actually seems half-human -- flattered and even slightly vulnerable -- in the scene where Temple pretends to be in love with him in order to save Stephen.

Here are complete credits for "The Story of Temple Drake," which by the way almost disappeared after its initial release. A restored version, courtesy of the Museum of Modern Art, premiered at the Turner Classic Movies Film Festival in 2011.