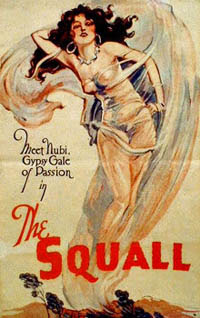 There's an old story in the theatre about a production of "The Diary of Anne Frank" where the actress in the title role gives such a bad performance that at the end of the play, when the Nazis enter, audience members yell out, "She's in the attic!"

The Lajos family has been sheltering a runaway Gypsy girl, the nubile Nubi (Myrna Loy), and she has repaid their kindness with lying, deceit and never-ending attempts to seduce every guy in the joint.

The Gypsies have now returned -- we have seen their tiny covered wagons come over the hill (a miniature shot). They are led by their whip-wielding master, who wants Nubi back, and you can't wait to see her get kicked to the curb.

Nubi is another one of Loy's turns as an exotic temptress -- for other examples, see "Thirteen Women" and "The Mask of Fu Manchu." And she is indeed a little Hungarian hottie, with her flaming eyes and cheekbones as sharp as razor blades. 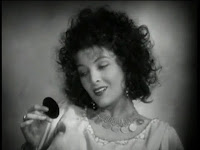 But the movie she's stuck in is a lot like a bad opera, filled with cheering peasants, singing gypsies and characters with names like Josef and Uncle Dani.

"The Squall" takes place on the Lajos family farm, where, an intertitle tells us, "the labor of years has been crowned with prosperity and content (sic)." (I'm still wondering where "-ment" went.)

But there are storm clouds on the horizon, foreshadowed by dialogue that is as subtle as a pile driver. Such as when Maria says, "Our lives have been like a summer day -- without a cloud. If only it could be that way until the end." Fat chance, Maria.

Or take this exchange, between Irma and her grandfather (Knute Erickson).

Irma: Oh, I just hate squalls. They only make everyone so unhappy. I'd like someone to tell me why we have them.

Outside, the squall is kicking up, and then there is a scream and a frenzied banging at the door. The family hears it, but they are so busy feeding their faces with content that a servant answers. In tumbles Nubi, who is fleeing from her abusive master because "He keel me!"

Nubi immediately plays on the family's sympathy by explaining that she is a reluctant Gypsy, having been stolen as a baby. The kind-hearted Maria offers her shelter from the squall, little realizing that her act of kindness will throw her marriage, her happiness, nay, HER VERY LIFE into Jeopardy! (Used with the permission of Merv Griffin.)

Nubi looks out the window at the tiny Gypsies as they leave the farm. Then she speaks a little monologue that makes all the men hot and bothered:

Nubi's first conquest is Peter the farm hand, who lip-syncs a little song about his love for Nubi while currying the horse. No, really:

Then Nubi moves on to Paul, and as a result he starts giving Irma the cold shoulder. "Never mind, Irma. Your old granddaddy loves you, and isn't that enough?," her granddaddy asks, answering his own question.

Finally, Nubi tries to seduce the master of the farm, Josef. "I am keesing your shadow," she purrs. Longtime wife Maria is watching from the shadows. What's a wife to do? "My husband -- half of my life," she says. "My son -- the other half." Not to get picky, but aren't they the same half? Or isn't there at least one-third of overlap?

Anyway, leave it to Maria to finally understand how dangerous Nubi is, while the men are all derp-derp-derpy about her. So when the Gypsies return, she makes the move to get rid of Nubi:

With Nubi gone, content returns to the family farm.

Here are the full credits for "The Squall."