"The Public Defender," or All's Fairbanks in Love and War 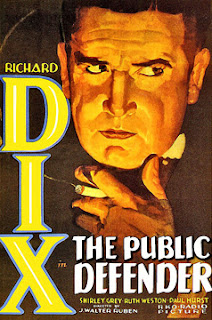 Travel with me, if you will, through my mind's eye to a backyard in small town America, circa 1931, filled with squealing kids.

Dad (yelling out the screen door): Montague! Time for dinner! We're having Wheatena and tapioca for dessert!

Dad: Come inside now, or no "Amos n Andy" tonight!

(The children exuent and Montague goes inside.)


The 1931 film "The Public Defender" invites reveries like that because it's a fun little secret-identity movie in the tradition of Douglas Fairbanks and "The Scarlet Pimpernel" -- the kind of combination of spookiness and derring-do that you can picture little Montague and his buddies watching at a Saturday matinee and then acting out for the next week or two, or at least until they go to the movies again.

The movie opens in the conference room of a troubled bank, where innocent treasurer Eugene Gerry (Emmett King) is being railroaded into the pokey by his shifty board of directors (at left). Will no one come to his rescue?

We then move to an exclusive country club, where Gerry's daughter Barbara (Shirley Grey) is awaiting the arrival of her rich, silly-ass boyfriend Pike Winslow (Richard Dix), who's living a life of indolent frivolity (or a life of frivolous indolence, if you prefer) on his father's money.

In the back room of the club, meanwhile, are the bank's board of directors -- three of them, that is, because the fourth has been visited earlier in the evening by a mysterious figure who calls himself The Reckoner. And The Reckoner has another visit planned before the evening is out: 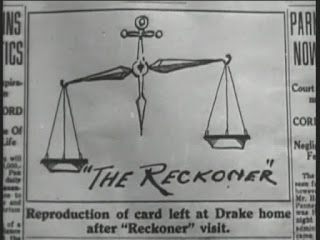 Who is this mysterious Reckoner, this cupholder -- excuse me -- upholder of the right? This champion of the accused? This unsmircher of the unjustly besmirched? This leaver of scary, scary business cards? 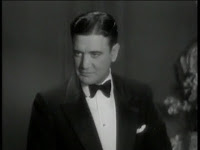 As played by the square-jawed Dix, Pike outlines split-second capers that are carried out with the help of two assistants -- a burly fellow known as the Doctor (Paul Hurst) and a skinny fellow known as the Professor (Boris Karloff). Their aim is to collect inside information from the board of directors that will clear Barbara's father, the bank's treasurer.

But Pike and his merry men do even more than that. When Barbara and her family are forced to sell their heirlooms, Pike sends the Professor to the auction to buy all the furniture. Then Pike rents a new apartment for the family and fills it with all their old stuff.

Then before you can say "J. Edgar Hoover's negligee" it's back to fighting crime, as the crew breaks into another bank director's home and makes off with the booty, which in this case means incriminating papers:

The investigation then narrows to just one bank director -- Kirk (Purnell Pratt), the ringleader. And he believes he knows who the Reckoner is. So there's a high-speed chase back to the Gerrys' apartment, where Pike has lured his quarry to his certain dooooooom:

Next comes a happy ending for all, especially Pike, who has proven his bad ass credentials once and for all and has left his last threatening business card -- or HAS he?!

As much fun as "The Reckoner" is, there are several missed opportunities for genuine atmospheric creepiness, especially when it comes to introducing the guy. Our first glimpse of him should be memorable and noirish. But instead of showing him skulking around dark alleys and the like, all we get is a long-winded explanation by a minor character. Don't TELL us, SHOW us! One wonders how they would have handled this material at a studio more experienced with the fast-paced and the lurid, like Warner Bros. or Universal.