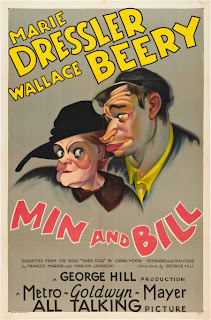 By the time she appeared in the 1930 film "Min and Bill," Marie Dressler was in her early 60s and had been performing for 38 years. Along the way she had befriended a powerful ally in screenwriter Frances Marion, who had adapted "Min and Bill" from a book written by her friend, Lorna Moon. The final screenplay bore little resemblance to Moon's work; Marion told MGM to buy the book rights mainly to help Moon financially. And she created the role of Min specifically for Dressler, to give her a starring role and more bargaining power with the studio. It worked -- "Min and Bill" was a huge hit, and Dressler won a Best Actress Oscar. (Marion would also be a kind of good-luck charm for Dressler's co-star, Wallace Beery. She would be the guiding force behind three of his best-known films -- this one, "The Big House" and "The Champ," which would result in Beery winning a Best Actor Oscar the year after Dressler's win.) 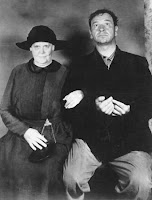 When she played roles in lesser pictures -- see "The Girl Said No" and "Chasing Rainbows" for just two examples -- Dressler would mug her way through scenes like a bulldozer tearing through topsoil. "Min and Bill" gives her a little more to chew on -- the film is an expert mix of comedy, drama and sentiment, compact and well paced.

Min is a crusty-but-lovable battle axe who runs a waterfront hotel-saloon. Her star boarder is Bill (Beery), a fisherman who's also her drinking buddy and confidant. The two of them bicker with an easy rapport, as illustrated here as Min gives Bill a shave:

The working girl Min is barking at in that scene is Nancy (Dorothy Jordan), who has been raised by Min after she was abandoned by her hard-drinking mother Bella (Marjorie Rambeau). Min loves her, but you'd never know it from the way she barks at her. Funny thing is, Nancy does know it and works willingly in the hotel.

Then two things happen -- one is that one of the other fishermen (Russell Hopton) is making advances to Nancy.  The other is that, after more than a decade, Nancy's mother is back on the scene. Min tells her that Nancy is dead, and then sends Nancy off to live with the local schoolmaster without any explanation. Then Min takes even more extreme steps to protect Nancy from her mooching mother:

Meanwhile, back at the hotel, Bill and Bella are making time with each other.

Bill: I've been told that before.

This provokes Min's wrath. She throws Bella out and then deals with Bill:

Nancy goes to boarding school for two years, and returns for a reunion with Min. She has news -- she's engaged to the son of a wealthy cannery owner. But as bad luck would have it, Bella also reappears, and she has discovered that Nancy is her daughter. But before she can ruin Nancy's life, Min stops her -- with a bullet, but not before Bella burns Min with a curling iron.

It's Nancy's wedding day, and Min is determined to protect her to the end. Bill wants Min to escape with him to Mexico, but Min can't resist taking one last look at Nancy:


"Min and Bill" shows the softer side of Dressler -- and as a result, she won an Oscar and became, you should excuse the expression, the biggest actress on the MGM lot in the early 1930s.

Here are the complete credits for "Min and Bill."