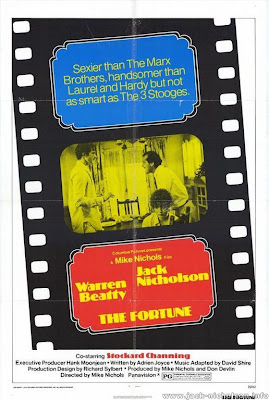 "The Fortune" isn't commonly considered a highlight in the careers of Warren Beatty, Jack Nicholson or director Mike Nichols.  In fact, when it was released in 1975 it was largely ignored by critics and moviegoers. But there was at least one person who thought it was great -- some geeky 18-year-old kid living in the Midwest who loved movies of the 1930s.

That would be me.

All these years later, I am still a cheerleader for "The Fortune," and the more pre-code movies I see the more I appreciate this film's pre-code flavor, even though it was released in an age where everything that was alluded to in the pre-code period could be explicitly shown on screen. (Did that sentence mention "pre-code" enough?)

"The Fortune" was written by Carol Eastman, under the pseudonym of Adrien Joyce. She also wrote "Five Easy Pieces," a big hit for Jack Nicholson in the late 1960s. Nicholson supposedly brought the script of "The Fortune" to the attention of Nichols. Beatty signed on as part of a two-picture deal with Columbia -- the other movie he would make for the studio is the great "Shampoo." 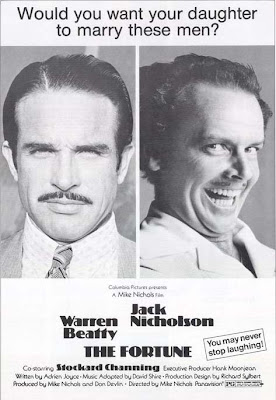 Each man brings his own special qualities to the movie.

For Nicholson, it's a chance for a rare straight comedy role. At this point he'd made his mark in dramas or comedy-dramas -- "Chinatown," "The Last Detail," "Easy Rider," "Five Easy Pieces" -- and he would soon win an Oscar for "One Flew Over the Cuckoo's Nest." As our Oscar, he has a rubber face, a frizzy hairstyle and the befuddled yet rascally manner of someone who thinks he's a lot smarter than he is.

For Beatty, it's a chance to spoof his own image as a suave ladies' man -- the first time we see him in this movie, he's looking at himself in a rearview mirror and adjusting his hat brim for maximum pimpness. Nicky looks good but he isn't very bright, either -- the fact that he hangs around with a dim bulb like Oscar is evidence of that.

And for Nichols, it's a chance to inject his trademark wit into a script that veers from the hilarious to the silly. "The Fortune" also features a Nichols specialty -- musical montages that help set the scene and even advance the plot. (See for instance "Silkwood," "Working Girl," "Postcards From the Edge" and, of course, "The Graduate.")

Based on a true story, "The Fortune" takes place in the late 1920s or early '30s -- a time when, we are told, the Mann Act forbade unmarried women to cross state lines in the company of married men. This causes a problem for Nicky (Beatty) and Freddie (Stockard Channing in one of her first feature roles). They want to be married and move to California, but Nicky's divorce isn't final. So Nicky talks his pal Oscar (Nicholson) into marrying Freddie and the three of them set off for the coast. Once Nicky gets his divorce, he figures, Oscar can split and he and Freddie can be married.

And the film's terrific opening sequence, scored by David Shire and with a vocal by Channing, lays out the setup very nicely:

But eventually, Freddie realizes that both men want her money, and announces that she's going to give it to charity. And Nicky and Oscar start planning her demise. But first comes Freddie's birthday, where Nichols nicely illustrates the triangle with a tango montage. This is followed by a scene where Nicky and Oscar, in very bad disguises, buy a poisonous snake as a possible murder weapon:

"The Fortune" is spiced with a memorable sense of time and place, courtesy of production designer Richard Sylbert and director of photography John A. Alonzo. The Los Angeles of this period is still in many ways a small desert town, and the apartment complex where they settle down is straight out of "Day of the Locust" -- a nondescript stucco village of bungalows surrounding a courtyard. Plant life is scarce, but that doesn't keep the nosy landlady (Florence Stanley -- Mrs. Fish on "Fish," for all you fans of late 1970s sitcoms) from hosing down everything constantly.

The garages behind the bungalows where Freddie, Nicky and Oscar live are reminiscent of the garage where James Allen (Paul Muni) hides out in order to see his love Helen (Helen Vinson) for one last time in the haunting final sequence of "I Am a Fugitive From a Chain Gang." 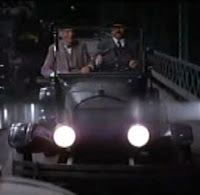 And in another sequence, Nichols has Nicky and Oscar meeting their contemporary equivalents -- two Laurel and Hardy-looking fellows in a Model T.

Eastman's script also has a nice pre-code spirit. She loves the slang of the period -- a mustache is a "cream catcher," a fight is a row (pronounced raow). One character points out that another character's fly is unzipped by saying "your fiddle case is open."

Once Nicky and Oscar decide to murder Freddie, "The Fortune" starts to sputter. First they buy the snake, but when they put it in into a cage with Freddie's pet -- now a full-grown chicken -- the chicken kills it. Then they try to drown Freddie by putting her into a birdbath. Finally they pack the unconscious Freddie into a trunk and drive to the ocean, where they intend to throw her in, but through their ineptitude the entire trunk ends up in the drink and Freddie ends up floating down to Long Beach, where she ends up hitching a ride (and getting involved) with another man.

Meanwhile, Oscar and Nicky are putting together a story for the cops and falling apart in the process. Freddie comes home to get her clothes and her chicken, and the story is wrapped up in a final musical montage:

Finally, attention must be paid to Stockard Channing. She more than holds her own against Beatty and Nicholson, which is high praise. Her character isn't allowed to mug as much as either of them, but she nails Freddie's upper class mannerisms, making them authentic and funny at the same time.

Here are full credits for "The Fortune," which by the way will air March 30 on Turner Classic Movies.