The Henry Kolker Film Festival: "I Like Your Nerve" and "The Crash"

He had a long stage career and directed several silent films, including a 1921 production of "Disraeli" with George Arliss, who repeated the role in an early sound film. In talkies, Kolker most often played older, pasty white men of power and/or wealth, often with younger wives and/or girlfriends who run rings around them -- the kind of guy who says, "Something wrong, my dear?" a lot because he doesn't know that his significant other is making whoopie with another guy.

In the course of a very prolific career -- including a mind-boggling 28 films in 1934 -- Kolker played judges, doctors and attorneys. He played the president of the bank that Barbara Stanwyck sleeps her way to the top of in "Baby Face," and he was the stodgy father of Katharine Hepburn in the 1938 film "Holiday." He also played the cuckolded husband of Kay Francis not once, but twice -- in the 1933 film "The Keyhole" and in the 1932 film "Jewel Robbery." In this scene from "Jewel Robbery," Kolker is the guy in the straw hat who watches impotently as William Powell slickly robs a jewelry store and enthralls Kay Francis in the process: 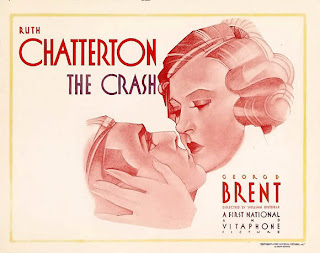 In the 1932 film "The Crash," Kolker plays a character who's more in control. He is John Fair, a successful Wall Street trader who kicks off the movie by calling it quits with his selfish mistress, Linda Gault (Ruth Chatterton):

But Linda's husband, Geoffrey (George Brent), is taking a beating on Wall Street. And he knows that Linda and John have had an af-Fair (Get it?) so he tries to blackmail Fair with Linda's letters, which receives a chilly response: 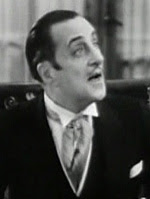 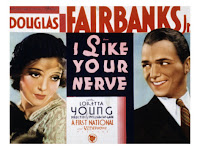 In the odd little 1931 film "I Like Your Nerve," Kolker slicks his hair with what looks like black shoe polish and adds Rudolph Valentino-style sideburns as Areal Pacheco, the minister of fiance in the small Central American country of Sao Pedro. Pacheco has embezzled funds, but to repay the debt he has engineered a marriage between his stepdaughter Diane (Loretta Young) and a piggish, priggish Englishman Clive Latimer (Edmund Breon) who happens to be very rich.

Diane has reconciled herself to the loveless match, but then she meets brash American Larry O'Brien (Douglas Fairbanks Jr.), who sweeps her off her feet by giving her a ride home -- after spreading broken glass across the road where her limousine will travel and causing four punctured tires. Pacheco regards the American coolly:

O'Brien's devotion to Diane includes engineering a kidnapping so that Latimer will pay a ransom, which O'Brien then passes on to Pacheco, thus earning the affection of his future stepfather in law:

Kolker stayed active in movies right up to his death at age 77 -- his last film was 1947's "The Secret Life of Walter Mitty."

Here are complete credits for "I Like Your Nerve," and a trailer:

Here are complete credits for "The Crash," and a trailer: