"Mary Stevens, MD" or Lyle Be Seeing You 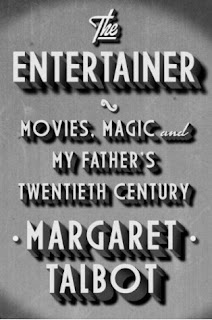 Lyle Talbot's been on my mind a lot lately, and believe me, that's the first time I've ever written that sentence.

This has happened because I've been reading a book by his daughter, Margaret, called The Entertainer: Movies, Magic and My Father's Twentieth Century. Margaret Talbot is a staff reporter for The New Yorker, and this book is a clear-eyed but affectionate look at the life her father lived, the friends and lovers he had and the career he experienced. 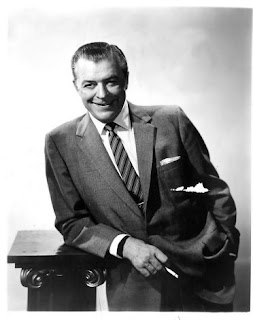 And it is some kind of career -- Talbot was never a megastar, but his career spans some real Hollywood highs and lows, from choice Warner Bros. pre-code films to cheeseball Z-movies directed by Ed Wood to several years as a regular on "The Adventures of Ozzie and Harriet." Margaret Talbot skillfully takes her father's life and places it within the context of the growth of American mass entertainment, mixing his personal experiences with larger historical milestones.

"When I was growing up," writes Margaret Talbot, "my father was older than all the other fathers I knew; born in 1902, he had been close to sixty when I was born, nearly eighty when I graduated from high school. His direct connection to the sepia-toned, history-book past -- before electricity, before talking pictures -- struck me as strange and alienating sometimes. ... Yet my father's turn of the century origins also gave me an intimacy with the past that I came to treasure, and a yearning not just to know about history but to feel what it was like."

Born in Nebraska, Talbot grew up in show business -- he worked as a hypnotist's assistant and then a magician's ringer in the audience, playing innumerable small towns. He worked in circuses and in repertory companies. Finally in 1932 he made his way to Hollywood, and amazingly he became a contract player at Warner Bros. In "Big City Blues" he gets into a fight with a hood played by Humphrey Bogart; in "Three on a Match" he's the lowlife who seduces well-to-do Ann Dvorak and gets her hooked on cocaine; in "Ladies They Talk About" he is the gangster who Barbara Stanwyck tries to help escape from prison. 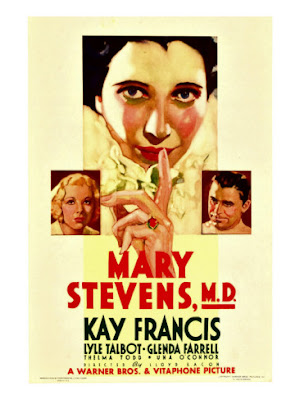 The 1933 film "Mary Stevens, MD" is an unusual one for Talbot, in that he plays the romantic lead. It stands out for a couple of other reasons, too -- one is the strong relationship between Kay Francis in the title role and Glenda Farrell as her faithful nurse and friend. Another is that heroine gets pregnant out of wedlock and keeps the baby. And another is that despite the trials and tribulations she experiences, Mary is always the picture of professionalism and skill.

As the movie begins, Mary and Dr. Don Andrews (Talbot) have just graduated from medical school together. They are romantically involved, and they open a clinic in one of the city's poorer neighborhoods. Glenda Farrell is along as their no-nonsense nurse, conveniently named Glenda. Here she is in action:


Mary gets right to work as a pediatrician. Don, on the other hand, starts romancing Lois (Thelma Todd), the daughter of the local political boss. He spends less and less time seeing patients, and finally ends up marrying Lois and taking a cushy government job.  "Some people work for a career," opines Glenda, "and some people marry one."

But Don finances a plush new office for Mary, and they're still professional pals. Then he takes her out one day for a long, liquid lunch before rushing back to the hospital for surgery he forgot about. Mary assists him because she knows he's the worse for wear and then gives him what for:

Mary and Don go through a period of estrangement. Then by chance they meet out of town -- Mary is on vacation; Don has gotten himself tangled in a political scandal and is hiding out to avoid a subpoena. With no one else around and lots of time on their hands, an affair begins. Then Mary comes back to town with news for Glenda:

Much drama unfolds before the happy ending. And even though Talbot's character is a stinker, Francis helps us accept him.

Margaret Talbot says this is one of her father's better films, and I agree -- not necessarily because of Talbot's performance, which is fine, but because of Francis and the conviction she brings to the role.

"My father liked Francis -- they called each other "cuz," and he thought her lisp was cute," Talbot writes. "They were never lovers, though both got around, but their chemistry works pretty well here -- not so much in the laughable scenes where they're doing something vauguely medical but in the private moments when he shows her a tender sympathy. He could play tender -- his natural sweetness and affection for women shone through in those moments."

Talbot knows her father wasn't perfect -- he was a little narcissistic and slightly superficial. He'd been married and divorced three times before meeting Margaret Epple, who he married in 1948. At that point he had a serious drinking problem. Margaret Epple Talbot helped him overcome that obstacle and become a doting, if slightly elderly, father to four children. (Margaret Talbot's brother, Stephen, had an acting career of his own; he played Gilbert, Beaver's friend, on several episodes of "Leave It to Beaver.")

Lyle Talbot died in 1996, at age 94. Thankfully, his ability to tell a good story outlives him in his daughter.

"Over the years," she writes, "I realized stories were what made my family. Stories were the soft golden net that enmeshed us. My father's stories. And my parents' stories -- how they met, how she saved him. It was a fairy tale, really, the brave and young princess who unlocked the cage -- but true, too."

Here is more information about The Entertainer: Movies, Magic and My Father's Twentieth Century, and here are the credits for "Mary Stevens, M.D.," and a trailer: