Caution: This whole post is one big old spoiler. 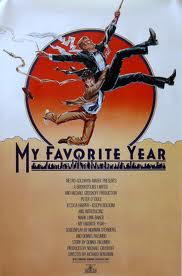 There are a lot of things to love about the 1982 film "My Favorite Year" -- Peter O'Toole's Oscar-nominated performance, Richard Benjamin's sensitive direction, great supporting performances from Mark Linn-Baker, Jessica Harper and Joseph Bologna, and Norman Steinberg and Dennis Palumbo's script.

Especially Norman Steinberg and Dennis Palumbo's script, because "My Favorite Year" wouldn't exist without it. The idea supposedly sprang from a conversation with one of the movie's producers, Mel Brooks, about his days as a writer on Sid Caesar's "Your Show of Shows" in the early 1950s.

Mark Linn-Baker plays our hero, Benjy Stone, nee Steinberg, a writer who seems a lot like Mel Brooks and/or Woody Allen, who also wrote for Caesar.

Joseph Bologna plays the rough-edged, Caesar-like King Kaiser, the star of the show Benjy works for  -- "Comedy Cavalcade," broadcast live every Saturday night on NBC, just as "Your Show of Shows" was. 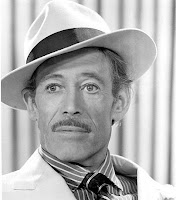 The favorite year is 1954, when much of television was still broadcast live, and Benjy's job is to keep Swann out of trouble until the broadcast. This leads to several well-staged slapstick sequences in restaurants and swanky apartments. Benjy also takes Swann to his old neighborhood in the Bronx to visit his mother (a great Lainie Kazan) and her husband, a Filipino prizefighter.

There are also several subplots, including Benjy's fledgling romance with K.C. (Harper) and Swann's desire to visit a never-seen daughter who lives in Connecticut.

"My Favorite Year" works its way up to that fateful Saturday night, where there's a lot going on backstage. Sketches on the show have been poking fun at a crooked union boss (Cameron Mitchell), and he has sent his stooges to beat up Kaiser on live TV. Meanwhile, Swann is terrified of appearing live ("I'm not an actor -- I'm a movie star!") and is ready to walk out. Everything comes to a head just as it's time to go on the air:

What I love about this ending is that it accomplishes several things at once -- it restores Swann's confidence while allowing him to parody his persona, it solidifies the relationship between Benjy and K.C., it beats the bad guys and it shows how extraordinary live, spontaneous TV could be. The moment when everyone in the control booth just watches silently as the audience goes crazy is very moving to me.

Another great thing about "My Favorite Year" is that it salutes a TV show that really deserves it. Unlike a lot of 1950s TV, "Your Show of Shows" sketches are just as funny today. To me, Sid Caesar is tied only with Jackie Gleason and Lucille Ball as the funniest performers of that decade, and Caesar didn't have familiar characters to lean on. Here is the classic parody of "This Is Your Life" with Carl Reiner and Howard Morris, where Morris's elastic body movements led to his being cast as Ernest T. Bass on "The Andy Griffith Show":

"My Favorite Year" is a love letter to live TV, to Hollywood legends and to the innocence of 1954. All's well that ends very, very well indeed.

Here are the full credits, and a trailer: