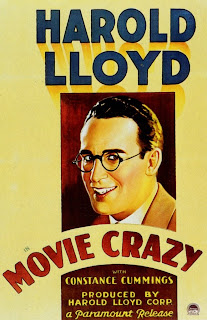 As small-town boy Harold Hall, Harold Lloyd plays the same sincere, guileless but resourceful character he played in silent films. He's followed his star to Hollywood, where he wants to break into pictures in the worst way.

Lloyd's character is right out of the early 1920s, but the people he meets -- particularly actress Mary Sears, nicely played by Constance Cummings -- are right out of a wisecracking pre-code movie. Mary ends up falling for Harold in spite of herself because he's so genuine, and so accident-prone -- her nickname for him is "trouble" -- and she provides great sarcastic commentary as she watches his pratfalls. As a result, "Movie Crazy" nicely bridges silent and pre-code comedy.

We begin in Littleton, Kansas, where Harold lives with his parents. He mistakenly sends someone else's photo -- an all-American good looker -- to a Hollywood studio in hopes of getting an audition. The studio extends an invitation and Harold is on a train at once.

Harold has hardly stepped off the train before he's tapped to be an extra in a movie scene being shot at the station. The stars are pompous matinee idol Vance (Kenneth Thomson) and Mary, in heavy makeup as a Spanish maiden. As you might expect, Harold ruins every take in practically every way possible, from tripping over the leading man to pulling down a stack of noisy metal milk cans.

Then we cut to the studio, where Harold meets Mary, out of makeup. It starts raining and Harold "helps" her put up her convertible top:

Harold ends up back at Mary's place, where she takes pity on him and lets him inside to get dry. He has a seat, and reminds us that thanks to his silent movie training he still knows how to take a fall:

Lloyd stays true to his long-established character in "Movie Crazy" -- his best comic moments come in largely silent slapstick sequences. My favorite part of the film is his screen test, a series of botched takes. All he has to do is enter and answer the phone, and he blows it beautifully:

Harold doesn't know that Mary is also the Spanish woman -- he thinks they're two different people. 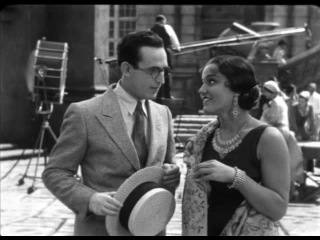 Mary keeps teasing him while dressed as her Spanish character, and he never pushes her away convincingly enough, so Mary dumps him. This leads to a sequence at a fancy dress ball. Harold mistakenly thinks Mary has invited him, and he ends up putting on a magician's jacket by mistake. In echoes of the formal dance sequence in Lloyd's "The Freshman," his coat unleashes chaos at the party and he endures the ultimate humiliation of being thrown out and rejected by Mary.

As is the patten in this kind of movie, Harold's triumph follows a few minutes later -- he ends up in a fight with Vance, his rival for Mary. He doesn't that it's being filmed, on a set that's supposed to be a sinking ship. Again, Lloyd's visual gags carry the day:

By the end of the picture, Lloyd is back in good graces with Mary and the studio. The kid from Kansas has stayed true to himself -- in a pre-code world he's gotten ahead by sticking to his own code.

Here are the full cast and credits for "Movie Crazy."