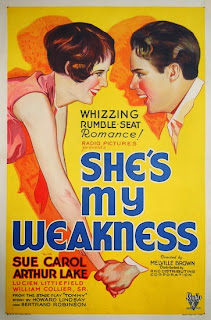 If you had the world's smallest bottle, and put into it the combined talents of Sue Carol and Arthur Lake, there still would be space for the tears of boredom you would shed while watching them lurch their way through the 1930 film "She's My Weakness."

This movie has everything, and by that I mean nothing -- glacial pacing, labored plot, painful performances. Like so many awkward early talkies it's based on a play -- the 1927 drawing-room comedy "Tommy," co-written and co-directed by Bertrand Robinson and Howard Lindsay. (Lindsay would go on to write the book for such musicals as "Anything Goes," "Call Me Madam" and "The Sound of Music," co-author the adaptation of the long-running play "Life with Father" and co-produce such hits as "Arsenic and Old Lace.") 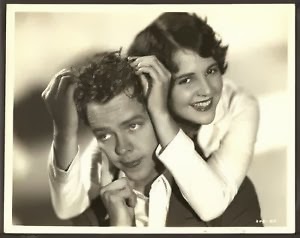 Lake plays Tommy, a well-meaning small town bank teller who loves Marie (Carol). To win the favor of Marie's parents, Tommy is always bringing candy and cigars (to mom and pop, respectively). But Tommy has competition -- fast-talking car salesman Bernard (Alan Bunce). Marie's pop doesn't like Bernard because his cars are driving pop's livery stable out of business, and because Bernard doesn't bring him cigars. (Pop is played by Lucien Littlefield, doing the kind of Keystone doubletakes that seemed dated even in 1930.)

Still, Bernard is pretty brash, as demonstrated by this clip that also demonstrates Carol's acting chops (not):

So, to recap -- Bernard is capturing Marie's affections because he seems more dangerous and her parents disapprove, while nice guy Tommy is in danger of finishing last.

Enter Uncle David (William Collier, Sr.), who tutors Tommy in being more defiant around Marie's parents, which he does in this clip that demonstrates Lake's acting chops (not):

Fortunately for almost all involved, "She's My Weakness" wasn't a career-ender.

Director Melville Brown went on to do some striking work, including the chain-gang film "Hell's Highway."

Lake, of course, went on to financial, if not artistic, success playing Dagwood Bumstead of "Blondie" fame in movies and on the radio and TV.

Carol wisely ditched her acting career and became an agent -- she's best known for finding and promoting the career of Alan Ladd, and eventually marrying the guy.

Ordinarily, we like to include three film clips with each review, but there's nothing else in "She's My Weakness" that's worth watching. So why do we even bother writing about it? To warn those who come after.
at January 02, 2014
Email ThisBlogThis!Share to TwitterShare to FacebookShare to Pinterest
Labels: "She's My Weakness", 1930, Arthur Lake, Awkward Early Talkie Theatre, RKO Pictures, Sue Carol