The 1954 film "Executive Suite" begins with an ending:

The man lying dead on the Wall Street sidewalk, shot from a POV perspective by director Robert Wise, is Avery Bullard, CEO of the Tredway Corporation of Millburgh, Pennsylvania. Tredway makes furniture, and until about two minutes ago Bullard was the man whose hard-driving leadership had saved Tredway after the suicide of its founder. Now he is gone, with no successor in place -- just an anxious group of vice presidents looking over their shoulders and jockeying for position. 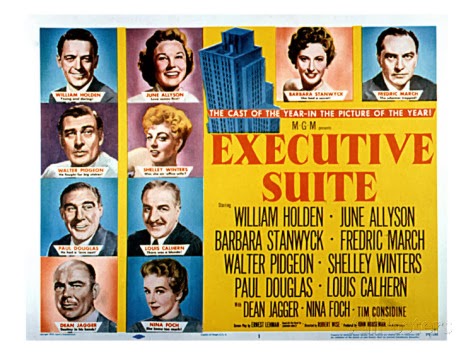 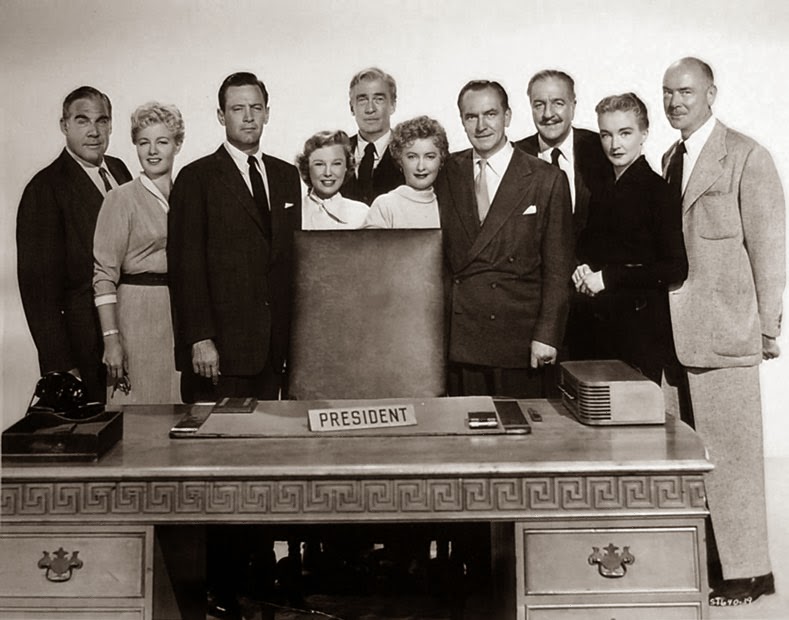 Still, this is one of my favorite 1950s movies. It's kind of the cinematic equivalent of the mid-century skyscrapers that started popping up about the time the movie was released -- sleek, modern, no big surprises but well constructed. And it has a great cast -- Barbara Stanwyck, Walter Pidgeon, June Allyson, Paul Douglas, Shelley Winters, William Holden as Kennedy and Fredric March as Nixon. (More about that in a few paragraphs.)

On a more emotional level, I enjoy "Executive Suite" because it reflects a time in recent history when manufacturing was done in America, and not farmed out to Mexico or China in order to beef up a stock dividend or add a bonus to the CEO's already obscene salary. It was a time when a company demonstrated a certain loyalty to the community that supplied its workforce, and when factory jobs helped build America's middle class. Millburgh is a company town, but in a good sense -- prosperous and populated by people who've worked for Tredway for generations.

Meanwhile, back at the executive suite, which has the ornate woodwork, stained glass and peaceful but prosperous air of a nice Episcopal chapel, personal and professional dramas are unfolding.

Julia Tredway (Stanwyck), daughter of the company founder, is mourning the loss of Bullard because he was her lovah --er, lover. A cool, remote, rather thoughtless lover, true, but you can't have everything. Julia owns a chunk of Tredway stock, which puts her in a position of power when it comes to selecting the next man at the top of the Tredway tower. Besides that, her voice is deeper than everyone else's.

Fred Alderson (Pidgeon), the company treasurer, is torn -- by rights and based on seniority he should be Bullard's successor, but he knows he is too old and tired and not the visionary the company needs.

Erica Martin (an Oscar-nominated Nina Foch) is Bullard's executive secretary, who, like most successful secretaries, knows and sees much more than she lets on.

Caswell (Calhern) is a scheming board member whose only concern is to make as much as he can from his Tredway stock. He was the only one to witness Bullard's death, and he sold his stock short as a result. His interest is in keeping the company chaotic so the stock will tumble and he can get back in at a bargain.

Dudley (Douglas) is the glad-handing vice president of sales who prefers to do business on the golf course or over cocktails. He has his own problem -- he's having an affair with his secretary (Winters).

Then there are the two main competitors for Bullard's job -- Kennedy and Nixon. Actually, that's a bit of an oversimplification, but the characters played by Holden and March are clearly meant to embody two very different ways of doing business.

Holden is MacDonald Walling, the vice president of design and development. He'd rather be in the mill, creating new products, than in the office. He's given to wearing single-breasted tweed jackets, Brooks Brothers shirts and never a hat.

Don, as he is known (not "Mac" -- that's an old man's name) has a background in design, and the house he shares with his loving wife (Allyson) and son is a model of clean, contemporary function. He wants Tredway to be known for well-made, useful furniture.

March is Shaw, the Machiavellian company controller. He didn't go to college the way Walling did -- he got his degree through night school. His focus is on the buck -- he advocates a cheaply-made, low-quality line of furniture that Walling despises. He is a definite hat wearer.

Walling is cool and confident, good looking and smart. Shaw always seems to be grasping and nervous -- he's constantly wiping perspiration from his upper lip. And he's driven by resentment, which leads him to use blackmail and other threats to get the top job.

"Executive Suite" comes down to a battle between Shaw and Walling for the future of Tredway, and, by implication, of Millburgh. It's pretty easy to see who the movie is rooting for. When Walling walks through the warehouse, he's approached by the nervous workers, who know and love him:

In the final showdown, Shaw defends his legacy by bragging about the dividends he's helped ensure for the stockholders. Walling doesn't have a problem with dividends, but he also believes in investing in the company's product. And he has a special scorn for the low-quality, high-margin furniture that Shaw supports:


These days, it's understandable to feel that the Shaws have won -- that too many of our major companies excessively squeeze profits and the workforce. Maybe the Wallings out there, few and far between, are too optimistic and idealistic. But once upon a time, Kennedy beat Nixon.