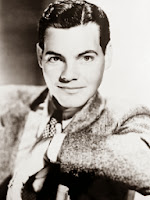 He began in vaudeville as part of a family act called "A Little Bit of Everything," which included his parents, his sister and two brothers. He made his film debut as a teenager in 1922, but didn't really appear in movies regularly until the mid-1920s, in a series of shorts shot at Keystone, playing opposite female comics such as Alice Day. He signed a contract with Pathe in the late 1920s and stuck around when the studio was absorbed by RKO. 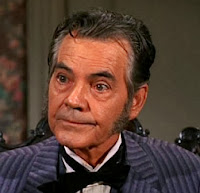 If you remember Quillan at all, it's probably because of his open face and boyish manner that would mark his performances even into his 70s, when he was playing small roles on TV shows like "Baretta" and "Little House on the Prairie." 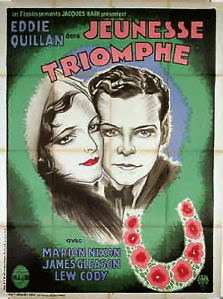 In the 1931 film "Sweepstakes," Quillan plays Buddy Doyle, a successful jockey known as the "Whoop-De-Doo Kid" because that's what he says into his horse's ear to drive him down the homestretch.

Buddy lives at Mother Clancy's boarding house with all the other jockeys and his lifelong friend Sleepy (James Gleason), a trainer who handles Buddy's mounts. When the film opens, Buddy has just won another race and heads home to a surprise dinner for his 21st birthday:

Buddy is now a man, and despite Sleepy's warnings, the siren call of a nearby roadhouse and its leading attraction, singer Babe Ellis (Marion Nixon), is too much to resist. He's shy around the ladies -- "I never tried to whoop-de-doo in a girl's ear," he says -- but he gets the hang of it.

Buddy's late nights with Babe lead to problems with Sleepy, so Buddy gets hired by the shifty owner of the nightclub to ride his horses instead. This means that Buddy ends up riding in a race against his old boss and buddy, Sleepy.

Will Buddy win? Or will he sidle up to Sleepy's horse in the homestretch and whisper "whoop-de-doo" into his ear, causing the horse to win and Buddy's career to go down the crapper?

Maybe this montage will answer that question:

Even the trains are booing him! That's cold.

Buddy can't get a mount anywhere, so he ends up as a singing waiter in Tijuana. When he does a song, we get some idea of what Quillan might have been like on a vaudeville stage:

Once Sleepy and Buddy reunite, it's only a matter of time before he's riding again, and Babe is waiting in the wings.

The 1934 film "Gridiron Flash" was released after the production code went into effect, so don't expect any spicy humor.

In this one, Quillan is Tommy "Cherub" Burke, a small-time hood who ends up in stir, where he becomes the star of the prison football team.

A fellow named Smith (Grant Mitchell) arranges for Tommy's release and recruits him to play for Belford College. But, even though his roommate is Grady Sutton, Tommy has a hard time fitting in. He's pugnacious and hotheaded, and his playing style is considered too rough. He's ready to leave, but the coach talks a willing co-ed named Jane (Betty Furness) into faking an interest in Tommy, and he stays.

So there's a romantic subplot as well as hard-charging football action. But the most interesting aspect of "Gridiron Flash," to me at least, is the supporting cast, which includes stalwarts like Sutton, Margaret Dumont and Edgar Kennedy, who plays Jane's dad, the campus cop. When Tommy and the cop first meet, Tommy's natural antipathy to the law comes through:

When Tommy attends a party at Jane's house, Quillan's vaudeville training comes through again when he's forced to dance as part of an initiation:

Meanwhile, Smith is not what he seems -- he wants Tommy to help him rob a wealthy matron (Dumont) and throw the big game. Tommy also finds out that Jane's interest in him was a fake, at least in the beginning. So he leaves town and leaves Belford without its star quarterback. Will he return in time to save the school's football honor? Will Jane come back? Will Grady Sutton's voice change?

Personally, I'm not as interested in the plot as I am in scenes like this, between Edgar Kennedy and Arthur Housman, who specialized in playing drunks -- in this case, a drunk who keeps Kennedy from seeing the football game. This little moment is right out of a two-reeler, and that's not a bad thing at all:

From the mid-1930s on, Quillan's career consisted mostly of small roles in big movies ("Mutiny on the Bounty," "Young Mr. Lincoln," "The Grapes of Wrath") and big roles in small movies ("The Mandarin Mystery," "Sensation Hunters"). He also appeared in a series of shorts at Columbia Pictures with Wally Vernon, including 1948's "Nobody's Home," seen here in two parts. By then, Quillan was in his late 30s, but he could still take a pratfall:

In the 1970s and '80s, Quillan made the acquaintance of Michael Landon and Robert Blake. This led to bit roles on Landon's "Little House and the Prairie" and "Highway to Heaven," and on Blake's "Baretta" and "Hell Town." Both Landon and Blake were known for their massive egos as much as their talents, but it's kind of cool that they noticed and appreciated Quillan's history and ability.