Both films were designed to introduce audiences to the brave new world of talkie films -- the ironic thing is that early talkies, because of cumbersome cameras and sound recording equipment, were much less "free" than silent films. The setting that both studios use to showcase sound is very static -- a clearly defined stage, proscenium arch and all. ("Broadway Revue" even has a pit orchestra.)

Still, this was a chance to see your favorite actors and actresses talk, dance and sing. MGM used to brag about having "more stars than there are in heaven," and at least a galaxy or two is accounted for here -- Joan Crawford, Norma Shearer, John Gilbert, Marie Dressler, Bessie Love, Anita Page, Laurel and Hardy, Buster Keaton and many others.

Like "The Show of Shows," "Hollywood Revue" prides itself on being very up to date, with sketches that poke fun at quaint Victorian songs and melodramas. The opening number of "Hollywood Revue" and at least part of the proceedings take place in the context of a much more modern setting -- a, um, minstrel show.

The emcees here are Conrad Nagel and Jack Benny. Benny was a headliner in vaudeville by this point, but this is early in his career and he's just beginning to perfect the mannerisms and low-key style that he would utilize so successfully in radio and television. The emcee of "The Show of Shows" is Frank Fay, whose stage persona Benny freely admitted to appropriating, and in comparing the two, Fay comes off as more effective (at least to me). Here's Benny in a sketch with William Haines:

Here, by comparison, is Frank Fay in "The Show of Shows":

The other emcee, Conrad Nagel, is pleasing and polished -- like almost everybody else he sings a number, a song that sends lyrics of love right up into Anita Page's nostrils. 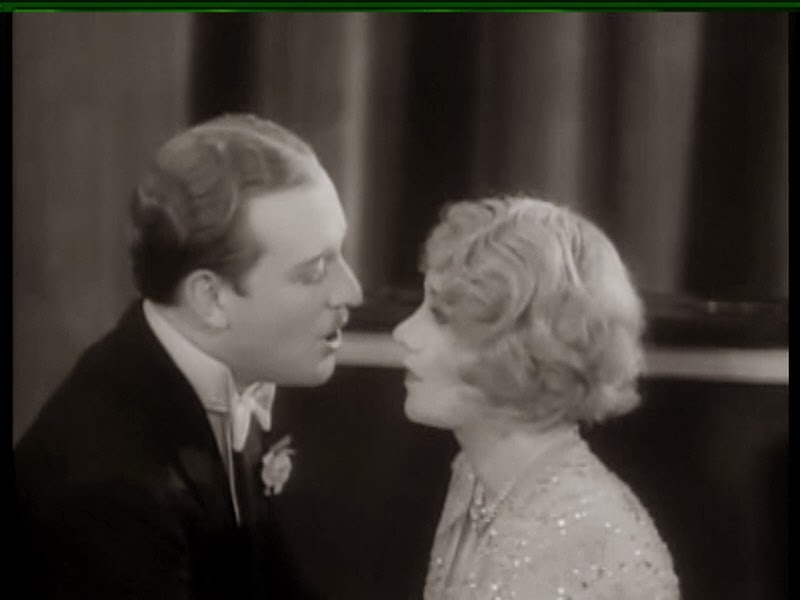 The two performers who are featured most prominently in "Hollywood Revue," however, are singers -- Charles King and Cliff "Ukulele Ike" Edwards. King was the male lead in MGM's other big film of 1929, "The Broadway Melody," and gets far more attention here that he merits. (He sings the song "Your Mother and Mine," which is parodied in "The Show of Shows.")

Edwards, on the other hand, was never a big star, but he was a reliable second banana in several MGM films of the early 1930s. (And he was the voice of Jiminy Cricket in "Pinocchio.") His singing style is simple and appealing, and here he accompanies himself on the uke:

Comedy bits are offered by Laurel and Hardy, Buster Keaton and Marie Dressler, but they are minor stuff. There are also quite a few ensemble numbers with elaborate sets and costumes.

And then, toward the end, there is for me the most wince-able portion of "Hollywood Revue" -- a bit, shot in two-strip Technicolor, with Norma Shearer, John Gilbert and Lionel Barrymore.

You've probably heard of it if you haven't seen it -- Gilbert and Shearer perform the balcony scene from "Romeo and Juliet," and then director Barrymore tells them that, under studio orders, the dialogue must be updated.

It's one of those ideas that has "cute" written all over it, and not in a good way. It also features what is supposed to be good-natured, natural bantering between the three, and it's truly squirm-worthy.

Soon enough comes the ending, also shot in two-strip Technicolor -- it's the movie's big hit song, "Singin' in the Rain," sung by the entire cast, in rain slickers, as they prepare to -- board Noah's Ark?

SEE Cliff Edwards in a rain hat! SEE Joan Crawford looking around for her camera! SEE Buster Keaton look like he wishes he was somewhere else!

SEE the complete credits for "The Hollywood Revue of 1929"!