The 1958 film "Let's Rock" is undoubtedly the finest film ever to feature someone fired live on the air by Arthur Godfrey.

All right, so that's a very limited category -- this is a very limited movie. It's one of those drive-in quickies with a plot so lightweight that the script was printed on Kleenex. Several times during the movie, things screech to a halt so that the hottest rock group of that day can lip-sync to its latest 45. The sets are roughly the size of someone's basement, and most scenes look like they were shot in one take. 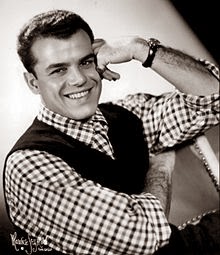 And yet, "Let's Rock" offers something kind of unusual -- a long look at Julius La Rosa.

La Rosa was a popular crooner in the 1950s, with a clear, pleasant voice in the manner of Tony Bennett or Perry Como. He had his own short-lived TV show and appeared on all the big variety shows of the day.

And he was the guy who helped trigger the downfall of Arthur Godfrey. More about that in a minute.

La Rosa is the star of "Let's Rock," playing, basically, himself. He's a popular singer named Tommy Adano whose gold records are all ballads. But 1958 is not a ballad age -- it is the age of Elvis, Jerry Lee Lewis and Chuck Berry. Tommy is reminded of it every time he turns on the TV!

"Rock and roll is here to stay," says Tommy's agent Charlie (Conrad Janis). "Do I have to spell it out for you?"

When Tommy appears on a TV variety show and is overshadowed by Paul Anka (as himself, lip-syncing his latest hit), his dilemma is vividly demonstrated. Screaming teenagers swamp Anka at the stage door while Tommy and his manager stand alone. Until:

Tommy is approached by Kathy Abbott (Phyllis Newman), a fan, but also a songwriter. She has written the song that is on the flipside of Tommy's latest flop. Tommy thinks she is a "kook," but there's a spark there.

Meanwhile, Tommy mopes around, watching from the wings while upstarts like Danny and the Juniors (singing their hit "At the Hop") eat his lunch. The sorrowful look on Tommy's face seems pretty realistic -- this is the same problem that La Rosa was facing at this point in his career.

Tommy asks Kathy to help cheer him up, but she can't get off work. So he goes home with a rather offbeat groupie, but he escapes from her clutches before any harm is done. He and Kathy reunite, and she convinces him to try a rock-and-roll song called "Crazy, Crazy Party." All is well.

"Let's Rock" features plenty of artifacts from the late 1950s, including performances by Anka, Della Reese and Roy Hamilton. It even gives us Wink Martindale as himself! (This was from his deejay days, before he became the host of the 1970s game show "Gambit.")

This was also one of Newman's few movie roles -- she was much better known on Broadway (she would win a Tony Award in 1963) and on TV, where she was a semi-regular on New York-based game shows like "To Tell the Truth" and "What's My Line?" She was married to composer-screenwriter Adolph Green (of Comden and Green) from 1960 until his death in 2002.

And the movie also features a bit of New York City location shooting, including a scene at Central Park where Newman and La Rosa are clearly freezing to death. It's kind of sweet, and their scenes together have a nice, ad-libbed quality -- the movie doesn't make a big deal about it, but Kathy is smarter than Tommy. Still, "Let's Rock" is decidedly in a minor key. 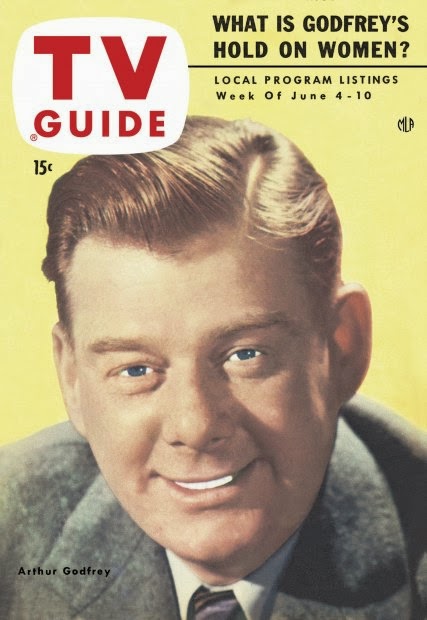 Now to La Rosa's story -- and it's a story that, at first, prominently features Arthur Godfrey.

He's not well known today, but from the late 1940s until about 1954, Godfrey was HUGE. No entertainment figure was more fawned over by the media, and no performer was more visible on radio and TV – Godfrey hosted a daily morning show on CBS, a Monday night talent scouts show, a Wednesday evening variety show and, for a brief period in 1950, nightly ukulele lessons. (Godfrey’s love of the uke spawned a boomlet of amateur ukulele-rs at that time.) Advertisers loved Godfrey, who pitched their products with a unique mix of irreverence and credibility. And because advertisers loved Godfrey, CBS loved Godfrey, too – he was the network’s biggest moneymaker for years.

Godfrey had a unique style on the air -- he was always himself, for better or worse. He had a reputation for being irreverent and even a little spicy (leading to some FCC warnings) long before Howard Stern. And because he was on the air daily, watching or listening to Godfrey could be a little like living with an alcoholic parent – you were always on the lookout for his “moods.” The performers who worked with Godfrey – he always referred to them as “the little Godfreys” rather than by their names – must have felt the same apprehension. His shows were part variety, part psychodrama – who was Godfrey peeved at (or proud of) today?

La Rosa was one of the little Godfreys. He joined the show in 1951 after being discharged from the service. Virtually all of the little Godfreys were Godfrey discoveries, and he ruled their lives – and careers – like a benevolent dictator. They became stars through their exposure with Godfrey, but he also kept them humble by downplaying their talent and discouraging them from appearing on other shows. 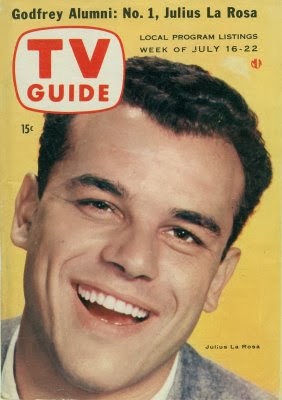 La Rosa was Godfrey's most popular discovery, and after a few years he was appearing on the covers of fan magazines and becoming a teen heartthrob. He was also starting to make hit records -- without Godfrey's blessing.

In the summer of 1953, Godfrey took some time off from his shows to have a hip operation that was covered by the press in roughly the same detail as D-Day. When he returned in the fall, Godfrey was at the peak of his popularity, and reportedly irritated at La Rosa.

Everything hit the fan on October 19, 1953. Toward the close of that day’s morning show on CBS radio, La Rosa stepped forward on Godfrey’s command to sing a song. But first Godfrey had a few things to day. He reminisced about how he had given La Rosa his start, and how grateful La Rosa had been. Then he reminded La Rosa that there were no stars on his show. Then La Rosa sang “We’ll Take Manhattan.” And in the final moments of the show, as the closing theme played, Godfrey said, “That was Julie’s swan song with us. He now goes out on his own.”

Pandemonium erupted. And after the show, Godfrey made a comment that would haunt him for the rest of his life – that La Rosa had been fired because he “lacked humility.” Godfrey could be a great communicator, but he apparently was without his sense of irony that day.

Godfrey’s slide downhill following the La Rosa departure wasn’t immediate, but it was steady, especially in the wake of more firings of the little Godfreys and more reports of Godfrey's bad behavior. Then came formidable competition in the form of Walt Disney – “Disneyland” premiered opposite “Arthur Godfrey and His Friends” in the fall of 1954 and the series never recovered. Soon Godfrey was off TV altogether.

Godfrey died in 1983, but not before attempting a rapprochement with La Rosa. La Rosa himself is still alive and still singing. Here's a segment from the A&E "Biography" series about the firing: