Eburne appeared in over 100 movies, including the 1918 film version of "A Pair of Sixes." But her Hollywood career really didn't begin in earnest until 1930, when she appeared in "The Bat Whispers."

Her movie roles were usually as busybodies, kind as well as malicious. One nice little change of pace was her brief but vivid appearance in the 1933 pre-code prison film "Ladies They Talk About," wherein Barbara Stanwyck causes a stir while in stir. In this cheerfully cynical film, Eburne plays "Aunt Maggie," a former madame whose seniority in the jug is symbolized by the fact that she has a reserved rocking chair in the prison lounge. Stanwyck is introduced to her by Lillian Roth, as another inmate: 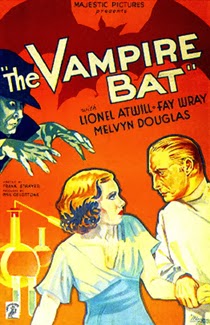 The 1933 film "The Vampire Bat" is a Grade-Z horror movie with a surprisingly big-name cast -- Lionel Atwill, Fay Wray and Melvyn Douglas. Eburne is fourth-billed, as Wray's Aunt Gussie. Her main job is to provide comic relief while everyone else runs around the village of Kleinschloss trying to figure out who's killing villagers by the dozen. All of them have puncture wounds in the neck and have been emptied of blood, sucked out through what one doctor calls the "jew-gu-lahr" vein.

Atwill is a doctor who might or might not be behind the murders; Wray is his devoted assistant and Douglas is the local flatfoot. Eburne's job is to spout medical malapropisms and scream at opportune moments -- she also faints at least twice, once when she meets demented villager Herman (Dwight Frye, who else?), who carries a bat in his pocket a la Lennie in "Of Mice and Men":

Eburne shows up again at the end. The murders have been solved, but the joke's on Gussie -- Dr. Atwill has given her a dose of Epsom salts for that get up and go feeling: 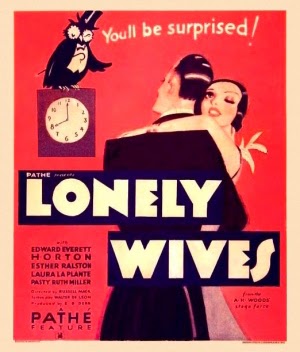 The 1931 film "Lonely Wives," on the other hand, is no laughing matter, even though it's supposed to be a comedy. The leading man, alas, is Edward Everett Horton -- in a dual role, yet.

Now don't get me wrong -- like cilantro, Horton is perfect in smaller doses, adding spice to everything from Lubitsch films to "Fractured Fairy Tales" on "The Adventures of Rocky and Bullwinkle." But in a lead role, much less a romantic lead, that's just simply too much Edward.

Horton plays Richard Smith, a well-known attorney and ladies' man. As his butler says, "Any pretty woman can twist him around her little finger -- and the prettier they are, the more twisted he gets."

Having mother-in-law around makes it hard for Richard to slip out for his assignations, but help comes in the form of The Great Zero (also Horton), a Vaudeville impersonator who disguises himself as Richard. All goes well until mother-in-law surprises Richard (really Zero) with his wife, who has returned early from a trip. And she's feeling very amorous. (The wife, not Eburne.)

"Lonely Wives" starts with an agreeable amount of wit and spice, but after Richard comes home and he and Zero get mistaken for each other about 75 times, things get tiresome.

As for Eburne, she chugged on through the 1930s and into the 1940s. She had the honor of playing Frank McHugh's mother in "Here Comes the Navy" and she played a supporting role in "Ruggles of Red Gap." In the late 1930s she played Mrs. Hastings the housekeeper in a series of "Dr. Christian" movies, with Jean Hersholt in his well-known radio role. (Most of them are available, in full, on YouTube.) Her final film credit was 1951's "Belle Le Grand," a western made at Republic Studios with Vera Hruba Ralston. By then Eburne was in her mid-70s.