"She Done Him Wrong," or The Way West

March 08, 2014
As Lady Lou, Mae West first sashays into "She Done Him Wrong" -- and into pop culture history -- by entering Gus Jordan's Place, where she is the featured, um, entertainment. But first she stops to say hello to a child:

At moments like this I think of movie censor Will Hays.

See, "She Done Him Wrong" was based on West's Broadway hit, "Diamond Lil." But Hays didn't like that title. He had no problem with lines like the ones above, but he didn't like the title?!

So "Diamond Lil" became "She Done Him Wrong," one of those rare classic films that today's audiences respond to as gleefully as most theatregoers did in 1933. The movie comes on like an 1890s melodrama, but the woman at the heart of it is grounded in the pre-code 1930s -- if not the more sexually sophisticated 1970s. 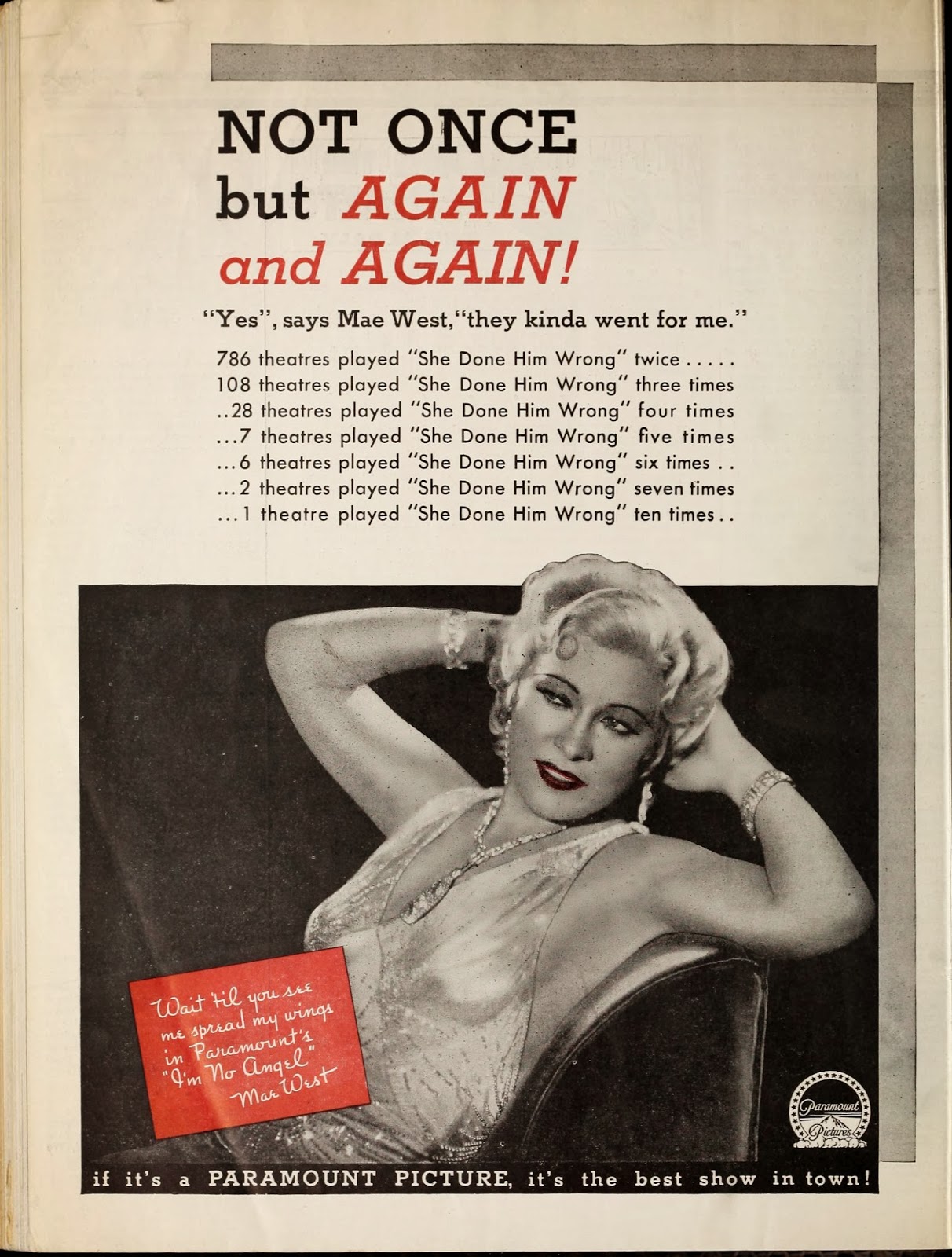 And in 1933 "She Done Him Wrong" hit movie houses like a Vegas payoff.

By that fall, as the ad at left reports, the movie was held over or brought back by popular demand at more than 900 theatres -- a record that hadn't been equaled since "The Birth of a Nation."

The success of "She Done Him Wrong" has pretty much everything to do with the self-possessed Miss West. She floats above the trifling plot like a well-padded bubble, descending only to make spicy wisecracks, pitch woo with co-stars Cary Grant and Gilbert Roland and raise an eyebrow every so often. 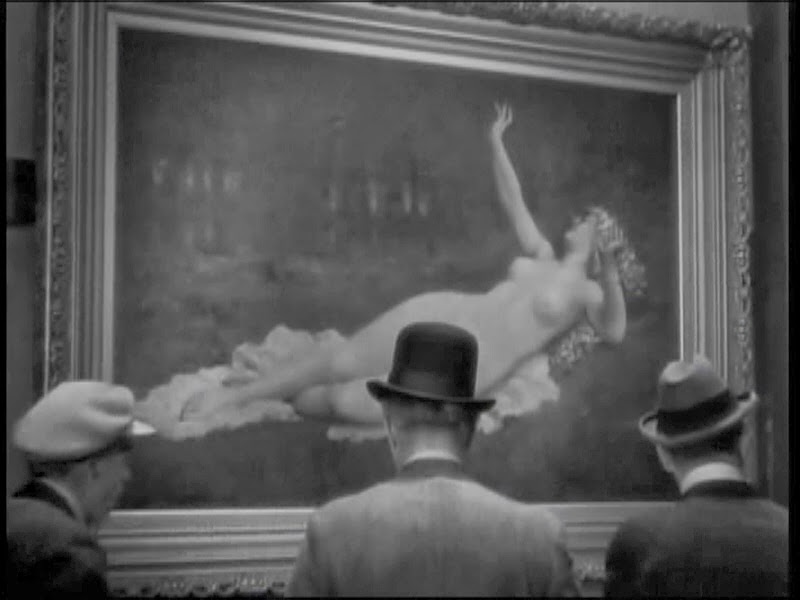 in that order, and surrounds herself with both. She is so treasured by saloon owner Gus Jordan (Noah Beery Sr.) that he has commissioned a large painting of her, scantily clad, for the saloon. Lou: "I gotta admit it's a flash, but I wish Gus hadn't hung it up over the free lunch."

Lou's juggling several men at the same time with a kind of genial insolence -- Gus, Captain Cummings of the local mission (Grant), a slimy political boss (David Landau), a suave Russian swindler (Roland) and her imprisoned old flame, Chick (Owen Moore). And when she isn't collecting diamonds from her admirers, she's taking the stage at Gus's to sing songs like "Easy Rider":

"I wonder where my easy rider's gone," a nice song about a missing jockey. Wait a minute -- could that have sexual connotations?! Apparently Will Hays didn't think so!

Lou goes to visit Chick in prison, and just the sight of her -- and the thought of what she's up to when he's not around -- drives Chick to escape and head to Jordan's place. Oh -- and there's also a counterfeit ring operating within the saloon, and an undercover cop who's trying to crack the case.

But really, none of that matters very much. Everything comes to a screeching halt to focus on Lou whenever she starts playing a guy, especially if it's one who looks like Cary Grant:

And in the end, when the counterfeiters are caught and the problem of Chick and the political boss are disposed of, we're left with Grant and West in a carriage:

"She Done Him Wrong" was directed by Lowell Sherman, who, that same year, directed "Morning Glory," for which Katharine Hepburn won an Oscar. Imagine working with Katherine Hepburn and Mae West within the same year. Sherman was also an actor, playing the doomed dipsomaniac director in "What Price Hollywood?" He died in 1934.


The Media History Digital Library is a great resource of vintage Hollywood fan magazines and trade papers. It's fun to look through them and see letters written in support of Mae West when the censors started circling like vultures. Here are a couple of my favorites:

What's this I hear about Mae West being "bad medicine" for our young girls? Who got the idea and from what source? Mae West simply has the ability to reveal all her beauty of character, her sweetness and womanliness in such an enchanting manner that men, young and old, go down on their knees. I'm for her. There is nothing about her wonderful performance to arouse antagonism.

Everyone is talking about Mae West. Her curves, her beauty, her personality, her excellent selection of words. But do you know what I think? I think she is the most clever little psychologist in Hollywood. She has something for everybody. Fat to please fat ladies, beauty and personality for the thin ones and sex appeal and scanty costumes for the men.