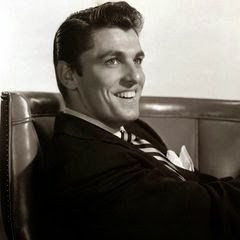 So why am I writing this?

Because Brasselle had a minor acting career, and, considering what came later, which we will detail below, it's kind of interesting to see him in action.

Also, to watch "Bannerline" is to watch a great movie studio -- MGM -- slowly dying, along with two of its acting stalwarts, Lewis Stone and Lionel Barrymore. 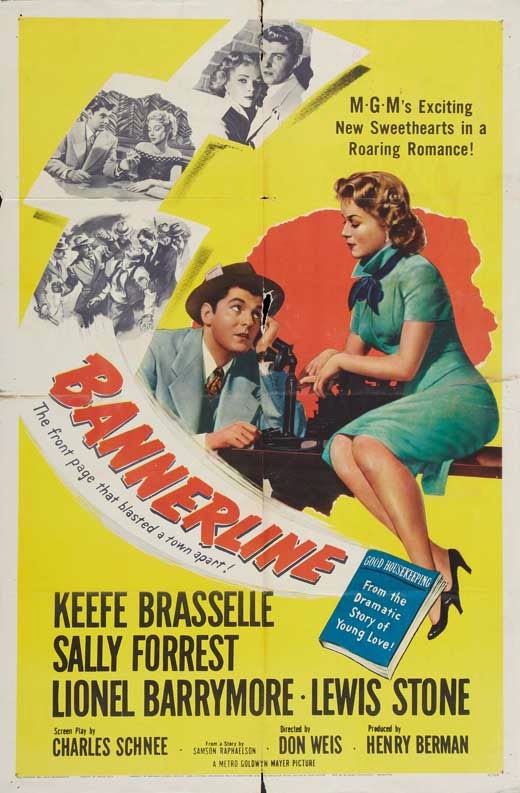 One of the last films produced under the watch of Louis B. Mayer, "Bannerline" takes place in the small town of Backlotsville, on the same streets which the late Mickey Rooney probably trod as Andy Hardy.

Brasselle plays Mike Perrivale, a cub reporter for the town paper, the Clarion. The paper's owner keeps assigning fluff pieces to Mike, and he's never allowed to write anything about the town's crime lord, Scarbine (J. Carrol Naish). Mike's fiancee (Sally Forrest) tips him to a story -- the town's beloved high school history teacher, Trimble (Barrymore), is on his death bed. Encouraged by the paper's wizened layout editor, Josh (Stone), Mike interviews Trimble, who expresses anger that the citizens (and the newspaper) are reluctant to take on Scarbine:

Mike gets an idea -- since Trimble is expected to die the next day, why not make up a fake edition of the Tribune that reports the end of Scarbine's corrupt reign so he can go happily? Josh helps out, and even the paper's editor chips in, with the understanding that they will produce only a few copies as souvenirs and one for Trimble.

Then, after everyone has gone home, Mike and Josh get another idea -- to print and distribute the fake newspaper to everyone in town. Since this is an MGM movie made in 1951 under Mayer, the unthinkable comes true without a lot of fuss or bother, and your lowest expectations are met -- Scarbine is incarcerated, Trimble dies a fulfilled man and everyone else lives happily ever after.

"Bannerline" is MGM at its smarmiest -- full of fake sentiment (with Spring Byington as Mike's plucky mother-in-law to be), noble speeches (Barrymore is largely immobile but still bites off his lines with vigor) and cute romantic situations between Brasselle and Forrest. Both Barrymore and Stone were just a few years from death (two years hence, in 1953, Stone would collapse and die from a heart attack after -- seriously -- chasing some kids off his lawn) and they class up the joint a bit, but there's just nothing to get excited about here. There were a lot of interesting innovations happening in Hollywood movies in 1951, but "Bannerline" doesn't reflect any of them. It might just as well have been made ten years earlier.

So much for "Bannerline." Now for a little more about Brasselle.

Born in Ohio as John Brasselli, he came west and made his movie debut in 1944, playing small parts in films like "The Babe Ruth Story" and "T Men." In 1951, the same year he made "Bannerline," he also appeared in a small part in "A Place in the Sun." In 1953, he was cast in what could have been a star-making role -- as the lead in "The Eddie Cantor Story," lip synching to songs while Cantor supplied the singing. He appeared on "The Colgate Comedy Hour" to promote the film in a swaggering, charisma-free performance:

Brasselle's work in the film was widely panned and it was a failure at the box office. He made only a handful of movies over the rest of the decade.

Then in 1961, Brasselle appeared in the news when the New Jersey nightclub he owned caught on fire -- with six gasoline cans found nearby. He was also dogged with rumored mob connections -- he was the godson of mobster Joe Profaci.

In the summer of 1963, Brasselle popped up, seemingly out of nowhere, on CBS as the host of a summer replacement variety show. When producer Greg Garrison yelled at Brasselle for missing an entrance, Brasselle put a hit on him. Garrison hid out at the apartment of a show regular, former prizefighter Rocky Graziano, who straightened things out.

The president of CBS at the time was James Aubrey, a mercurial fellow who was known as "the smiling cobra." Aubrey had built CBS into a ratings powerhouse by scheduling light fare that emphasized, as he stated in a memo, "broads, bosoms and fun" -- hits like "The Beverly Hillbillies," "The Dick Van Dyke Show," "The Andy Griffith Show," "Gunsmoke," "The Red Skelton Hour," "The Lucy Show" and "Candid Camera."

For whatever reason -- the mob connections or just plain greed -- Aubrey threw his lot in with Brasselle for the 1964-65 season. On CBS's fall schedule were three new shows from Brasselle's Richelieu Productions. The company had never produced a TV series, and the shows didn't even shoot pilot episodes. What's more, they all had artificially high production costs that screamed "kickback." None of the three -- "The Baileys of Balboa," "The Cara Williams Show" and "The Reporter" -- lasted more than a season, and in early 1965 a CBS shareholder charged Aubrey and Brasselle with conspiracy to defraud the network.

Aubrey resigned shortly thereafter, and Brasselle became bitter. He wrote a work of fiction, "The CanniBalS," based on the experience. In interviews he blamed everyone in Hollywood for his failure, and Hollywood reciprocated by leaving him totally alone.

Just one more thing -- Brasselle's "Colgate Comedy Hour" appearance reminds me of the episode of "The Dick Van Dyke Show" where Rob, Buddy and Sally are forced into writing a nightclub act for the no-talent nephew of a mobster (played by executive producer Sheldon Leonard):