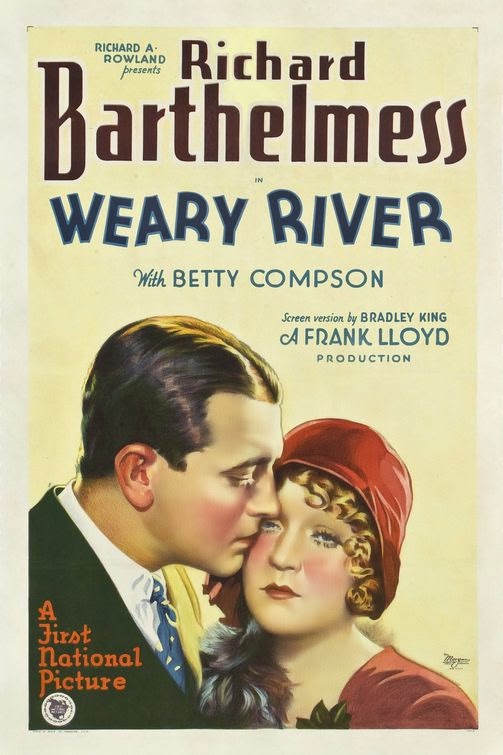 A better title for the 1929 film "Weary River" might be "The Sad, Sensitive, Singing Bandleader Convict."

OK, maybe it wouldn't be a better title, but it would be more descriptive of the trials and tribulations faced by our morose hero, Jerry Larrabee, played by hall-of-fame frowner Richard Barthelmess.

"Weary River" is a bit of an odd duck in that it is a part talkie, alternating silent and talking sequences. You might expect the difference between the two to seem herky-jerky, but director Frank Lloyd (he was Oscar-nominated) makes the transitions surprisingly smooth.


As the movie begins, Barthelmess-as-Jerry isn't sad at all! He enters a speakeasy where everybody knows his name. He is a high-living gangster, and always on his arm is the beauteous Alice (Betty Compson) who, when the occasion calls for it, can make with the tears like nobody's business.

But for the time being, everything is beer and skittles (the game, not the candy) -- Jerry and Alice are living the high life, cohabiting a ritzy apartment and wearing well-tailored duds. Then Jerry gets a visit from the cops, personified by Robert Emmett O'Connor. (Who else?) They're chummy, but an innocent bystander has been killed in a shootout between Jerry's gang and their rivals, and Jerry has been fingered as the shooter. So Jerry goes downtown:


Then, before you can say "The Shawshank Redemption," Jerry is in the jug. At first he is bitter about being there, and causes a mini-riot with a few guards. But the prison warden (William Holden, but not the one you're thinking of) is an understanding sort. He cautions Jerry about the pitfalls of running with "bad companions," and Jerry, a budding musician, starts leading the prison band. When Alice comes to visit, the warden (wrongly) pegs her as a bad sort and discourages her from seeing Jerry.

Meanwhile Jerry, miserable and inspired by a minister's talk, writes a song called "Weary River" and sings it on the air. The patrons of the nightclub where Jerry used to hang out listen raptly, including Alice:


"Weary River" is a hit -- so much so that Jerry sings it, in its entirely, at four different times throughout the movie. Magically, Jerry is then released from prison and tours the country as the "Master of Melody." But then thoughtless people start throwing the word "convict" around:


How does Jerry react? By crying all the way to the bank? Nope. He gets bitter and frowns even more than usual. His vaudeville career nosedives, and he starts hanging out again with those bad companions the warden warned him about. The warden learns of Jerry's possible defection and rushes to help, as does Alice. Will they save the Master of Melody, or will he turn into a Maker of Mayhem?

"Weary River" is well intentioned and sincere, and even a little prescient -- within a year, thanks to the Great Depression, a lot of people who saw this movie would be sailing weary rivers of their own.