My CMBA Fabulous Films of the '50s Blogathon Entry: "Love Me or Leave Me," or Great Day

This post is part of the Fabulous Films of the '50s Blogathon, brought to you in living color by America's premier classic movie blog association, the Classic Movie Blog Association. 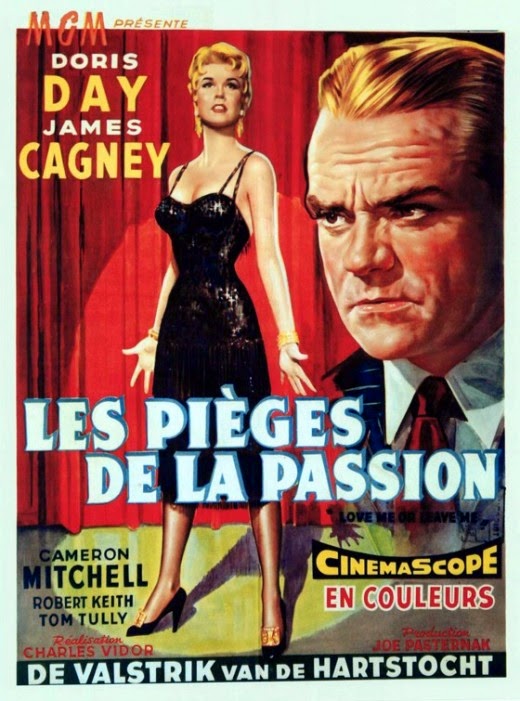 The 1955 film "Love Me or Leave Me" comes smack dab in the middle of Doris Day's peak performing decade -- at its beginning she was a game gamine in routine Warner Bros. musicals and by its end she would be, arguably, the biggest and most bankable female star in Hollywood.

But "Love Me or Leave Me" is much more than a marker -- to me, it's one of Day's best movies, and certainly the one where she first demonstrates her chops as a top-flight dramatic actress. She's so good, in fact, she's on a level with her co-star James Cagney -- and that's quite a level. Day might have spent the first part of the 1950s in fluff like "Tea for Two," "Lullaby of Broadway" and "Shine On, Harvest Moon," but she was learning her stuff, and in this movie she struts it like she never did before.

We are in 1920s Chicago, the city of the big overcoats. At one of the burg's lesser nightspots, the Dance-Like-No-One-Is-Watching Hall, Ruth Etting (Day) is making with the foxtrot and Charleston, spending her evenings being pawed by pathetic prancers. When she talks back to a fresh customer, she gets the boot -- but she has lassoed the attention of Moe "the Gimp" Snyder (Cagney), a small-time hood.

At first, Snyder is solely interested in Ruth because he likes the way the fringe swings on her dress, and he thinks of her as a quick pickup. But she quickly lets him know just what kind of girl she is, and he can like it or lump it:

So Snyder takes Ruth under his wing, although his motives aren't totally altruistic. He uses his influence to get Ruth another job, at a club that we'll call Chez Cockroach. She joins as a member of the dancing line, but she wants to sing. Snyder's eyes are on the prize, so he does anything Ruth asks him, and she gets a spot as a singer. On her opening night he's a bundle of nerves:

From there it's only a short jump to radio, records and the Ziegfeld Follies, all with Snyder calling the shots. If Ruth strains too hard at the leash, he yanks it to remind her who's boss and who helped her get to the top. And she goes along with it, figuring she has an obligation to Snyder.

But Snyder wants more than to be Ruth's manager -- he wants Ruth. And in the movie's saddest scene -- both because of Ruth's despair and because of Snyder's desperation to convince Ruth to love him -- they get married. Snyder's tries to cheer Ruth by reminding her of how he can guide her career, and her response is devastating: "You don't have to work so hard -- you don't have to sell me. I'm sold."

After playing nightclubs around the country -- and becoming an expert at drinking heavily -- Ruth ends up in Hollywood, where she once again meets Johnny (Cameron Mitchell), a pianist who helped guide her career in Chicago. Now he's the musical director on Ruth's picture, and although she loves him she knows that Snyder will kill him if he finds out, so she plays it close to the vest. Still, that doesn't keep Snyder from resorting to violence out of jealousy.

"Love Me or Leave Me" is based on a true story, but it's been cleaned up for Hollywood in several ways. For one, Day is, from all accounts, a much better all-around performer than Etting ever was. Etting's strength was singing and that was it -- during her appearances in the Ziegfeld Follies, she was instructed to exit the stage after her number so as not to interfere with the dancers. For another, the movie's Snyder was meaner and poorer in real life -- he drained Etting financially as well as emotionally.

Etting herself is said to have disliked Day's performance, expressing a preference for Jane Powell in the role. She thought Day was too tough -- to me, Day underplays the role perfectly. She's cool, but with an edge. And a movie with a female lead who didn't hold her own against Cagney would be painful to watch.

Cagney was nominated for a Best Actor Oscar for "Love Me or Leave Me," but Day wasn't. Doesn't seem fair -- but in typical Day fashion, she sucked up any disappointment she might have felt and in 1956 she demonstrated her dramatic skills again in Alfred Hitchcock's "The Man Who Knew Too Much." You go, girl.

at May 26, 2014
Email ThisBlogThis!Share to TwitterShare to FacebookShare to Pinterest
Labels: "Love Me or Leave Me", 1955, Cameron Mitchell, Doris Day, James Cagney, MGM