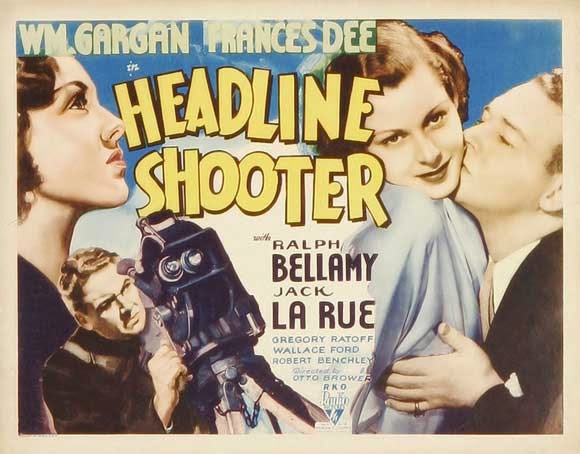 In the 1933 film "Headline Shooter," William Gargan and Frances Dee play news hawks who don't really care who they trample over to get to a story, and that is why they are awesome.

Gargan plays Bill Allen, a photographer for Phototone newsreels, and Dee plays Jane Mallory, a newspaper sob sister. Despite the entreaties of friends, family or even the victims themselves, Bill and Mallory -- everyone calls her by her last name -- are pros to the end, and they belong together like Hildy Johnson and Walter Burns in "His Girl Friday."

We first meet the fast-talking Bill as he's getting ready to photograph a beauty contest that will be judged by the head of the Crocker Cracker company, the honorable Franklin Pangborn. Bill has already shot a photo layout with a certain negligeed contestant in bed, eating Crocker Crackers, and he strongly suggests to President Pangborn that if said contestant wins, then a beauty queen will be endorsing Crocker Crackers.

The beauty pageant opens the film and we immediately see a cast of welcome faces -- Pangborn, Robert Benchley as the windbag doing pageant play-by-play on the radio, and Hobart Cavanaugh and Wallace Ford as Bill's fellow newsreel photogs.


Immediately after the beauty pageant, there is an earthquake, because Hollywood. And while he's acting all devil-may-care filming widespread destruction, Bill meets Mallory, and together they go looking for scoops. They share a cigarette or two, and then she has to find a way to get back to the paper:


Bill's always been one to play the field, but he can't get this dame off his mind, get me? And Mallory has to admit she likes him, too, but that's a problem, because fiancee Ralph Bellamy is waiting for her in her Mississippi home town. So Mallory scrams home on vacation, but Bill ends up there, too, because a substandard dam has busted and caused a flood.

At first, Bellamy -- the boring town banker, natch -- welcomes Bill and Mallory and hopes they tell the story of how corners were cut in the damn dam construction. But when the faulty work is traced to the town judge, the townspeople rally around him (and don't even try to talk to them about the negro situation). Allen is forced to destroy his incriminating film. Ya think he does it?

Meanwhile, Mallory gets back to town and her editor (our old pal Purnell Pratt) gives her a hot story -- a gangster's moll (our old pal Dorothy Burgess) is in the hospital and ready to sign a statement incriminating her boyfriend. So Mallory hotfoots it over and gets her story and the statement:


Then she leaves the hysterical moll in the hospital. Later, traitor!

But wait! Mallory is taken hostage by the gangster and his goons, and Bill and Ralph Bellamy leave no stone unturned in tracking her down. Once they find her, however, Mallory is more interested in phoning in an exclusive than in marrying Bellamy. This leads him to utter this heartfelt final statement:

And, with the help of Bill, Mallory tells her story before the cameras:


Here are the complete credits for "Headline Shooter."