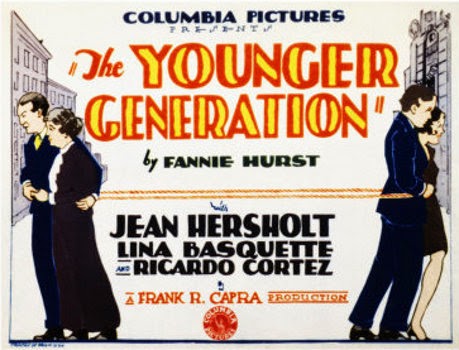 Despite its title, Frank Capra's 1929 film "The Younger Generation" is really mainly about an old guy -- Julius Goldfish, a junk dealer from New York City's Lower East Side, played by Denmark's own Jean Hersholt. (A Dane playing a Jew -- Hollywood!)

The Goldfish family -- papa Julius, mama Tilda (Rosa Rosanova), daughter Birdie (Lina Basquette) and son Morris (Ricardo Cortez) -- are living the American dream, only, as Papa might say, it ain't so dreamy. They have moved on up, moved on up, to the Upper East Side, to a deluxe apartment in the sky-hi-hi because Morris, inheriting Papa's junk business, has become a fancy-schmancy antiques dealer and the family has moved in with him.

Based on a story by Fannie Hurst, who also gave us "Imitation of Life" and "Back Street," "The Younger Generation" has its own kind of Hurstian family heartache -- Morris dominates his family and orders them to assimilate or else! This means Papa has to dress for dinner and bathe a little more regularly than he's used to. Mama loves her new life, but Papa finds himself schmoozing with the delivery men because it reminds him of his old, simpler life.

Little by little, in fact, Papa's heritage is being taken away. Morris becomes the family's alpha male, forbidding his sister to see the struggling musician she's loved for years. Then Morris makes an announcement -- he's changed his surname to Fish. (Here we see a little jab at rival producer Sam Goldwyn, aka Sam Goldfish.) Papa and Birdie commiserate:

And still there's more! Morris ostracizes Birdie and makes his parents think that Birdie has deserted them. As a result, Papa wastes away, a prisoner on Fifth Avenue:


But WE know differently -- that Birdie has married her musician, who's in jail for a jewel robbery, and they have a daughter:


By the time Papa finds out the truth, he has faced the final indignity -- he has become an object of embarrassment to his meshugenah son:


"The Younger Generation" is a part-talkie, and the transitions between silent and talking sequences are a little bumpy. But director Frank Capra is already demonstrating his skill in mixing heart and humor, and in peppering "The Younger Generation" with the same salt-of-the-earth types that show up in his later films. And the ending is a killer -- Morris, left alone after everyone has moved out, covers himself in Mama's shawl and suddenly looks much older in front of his massive fireplace.