Pre-Code vs Post-Code: "The Crowd Roars" and "Indianapolis Speedway"

August 03, 2014
Pre-code versus post-code is the difference between a Duesenberg and a Hummer, between cafe au lait and chocolate milk, between a camisole and a union suit.

Take the differences, for instance, between the 1932 film "The Crowd Roars" and the 1939 film "Indianapolis Speedway." Same story (by Howard Hawks, who also directed the first film), same setting, same characters (with different names, in some cases), even much of the same racetrack footage. By the way, want to know how to switch up your stock footage of a crowd? Just flip the image, like this: 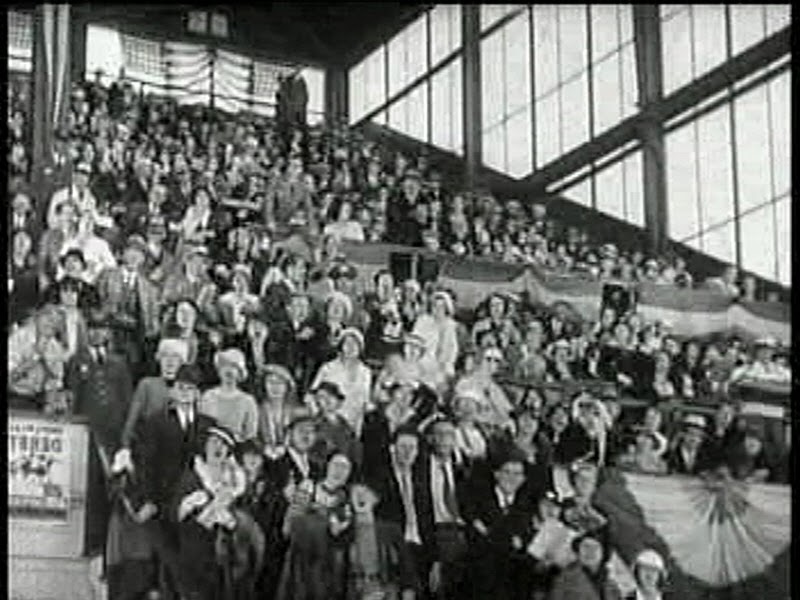 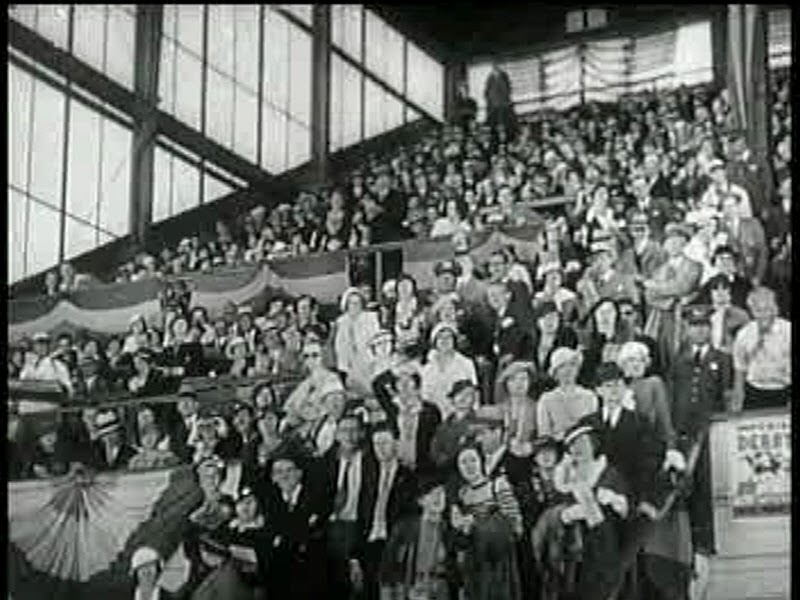 And, since these are Warner Bros. films made in the 1930s, naturally both of them feature Frank McHugh -- playing the same character, and even with the same name. Spud. (Frank McHugh was born to play guys named Spud.)

But there's a distinct difference in the way the film's romantic relationships are portrayed, and, by extension, in the relationship between the brothers at the center of the story.

The brothers are Joe and Eddie Greer, played by James Cagney and Eric Linden in "The Crowd Roars" and Pat O'Brien and John Payne in "Indianapolis Speedway." Joe is a world-famous racing driver who drinks and carouses a little too much, tilting slightly but not totally into arrogance. Eddie is his hero-worshiping brother, who also wants to race.

In the 1939 version, Joe's reluctance to work with Eddie has a noble basis -- he wants Eddie to finish college, at Joe's expense. But after Joe leaves his hometown and his visit with Eddie to return to Los Angeles, he finds an unexpected stowaway.

In the 1932 version, Joe's reluctant to work with Eddie for two reasons -- one is because of Eddie's inexperience, but the other is that Joe doesn't want Eddie to know that he's shacking up with longtime frail Lee (Ann Dvorak). Once Eddie enters Joe's life, Joe starts giving the cold shoulder to the bewildered Lee. In "Indianapolis Speedway," by contrast, Joe and Lee (Gale Page) are already engaged, which makes their coupling a little more legitimate. When Joe gives Lee the brushoff in "Indianapolis," he makes it clear it's because he wants to tutor Eddie. In "The Crowd Roars," Lee grins and bears it, but in "Indianapolis Speedway" she gets rightfully honked off. Here are the two scenes:


But the real woman trouble in both movies comes from Lee's friend. In "The Crowd Roars," her name is Ann (Joan Blondell) and in "Indianapolis Speedway" her name is Frankie (Ann Sheridan). In both movies, she's first portrayed as bad news, and Joe doesn't want her "corrupting" his pure younger brother. In "The Crowd Roars," when Ann meets Eddie and starts showing some leg, Joe sneers, "Why don't you stand on your head while you're at it?" -- a line that's as likely to show up in "Indianapolis Speedway" as I am to grow a tail. In "Indianapolis Speedway," Frankie -- who's the roommate of Ann -- is known for feminine wiles that have driven at least one racer track wacky. (Sheridan, at the peak of her reign as Warner's "Oomph Girl," is top billed here -- and like Blondell, she is shown in the skimpiest post-code outfits possible.)

Here's how Cagney and O'Brien handle the problem of the other woman:


Even by Cagney standards, the character of Joe is wound unusually tight. His obsession with keeping Eddie from sinful entanglements and what he perceives as loose women -- playing around for me, but not for thee -- goes beyond brotherly concern and makes him seem like a hypocrite.

O'Brien portrays Joe as a little wearier -- the movie is telling us that what he needs is to settle down with a good woman, but it'll take him about 65 minutes to figure that out.

All around, in fact, the Joe in "Indianapolis Speedway" seems more human and more vulnerable. The relationship between the brothers is much warmer -- in the 1932 film, Joe dominates Eddie the way that Cagney naturally dominates the more diffident Linden. Payne, by contrast, has a stronger screen presence and makes more of an impression opposite O'Brien.

In both versions, Joe's downfall comes when, out of anger at Eddie's romance, he causes a fiery crash that kills Spud (Twice!). Joe is spooked and can't bring himself to race again, but he gravitates toward Indianapolis on the day of the 500. Eddie is racing, and when he is injured, Joe jumps back behind the wheel with Eddie as his co-driver. Guess who wins?

In the 1932 film, the reunion between the brothers isn't even played out -- Joe just jumps in the car and takes off. But in the 1939 version, there's a spoken rapprochement between the brothers, capped off when Eddie gives Joe his trademark cigar to chomp on for good luck. Guess who wins?

Here are the full credits for "The Crowd Roars" (which also features several real-life drivers as themselves) and "Indianapolis Speedway."