Pre-Code Blogathon: "Love Me Tonight," or Some People Call Me Maurice

This is part of the Pre-Code Blogathon sponsored by Danny at Pre-Code.com and Karen at Shadows and Satin. Please visit either and/or both of them for more offerings.


The 1932 film "Love Me Tonight" lets you know you are in for something special from the very beginning:


You haven't heard a word of dialogue, but the first few moments of the film set the stage perfectly -- Paris, morning, people waking up, a friendly man jauntily walking to his tailor shop and greeting his neighbors ("Hello Mrs. Bendix! How's your appendix?"). 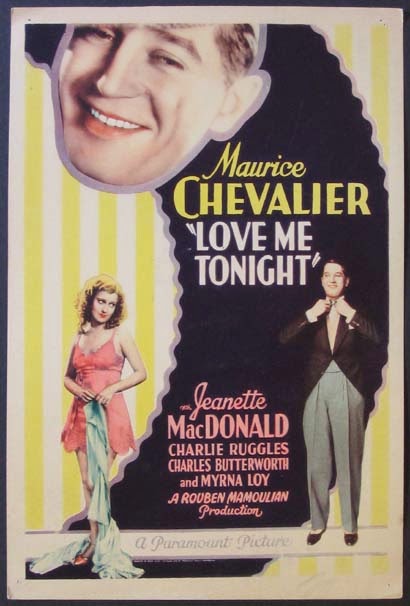 When it comes to modern life, I'm a firm believer in what Lily Tomlin once said: "No matter how cynical you get, it's never enough to keep up." And I love the cynicism of so many pre-code movies -- I think it's a period of filmmaking that mirrors the tenor of the times like no other.

But when I watch a movie like "Love Me Tonight," I happily park my cynicism at the door. It doesn't come easily to me, but the movie deserves sincere adjectives that I usually use sarcastically -- "delightful," "thrilling," "enchanting." It's a witty, lovely fairy tale with a prince named Maurice and a princess named Jeanette. It's not just one of my favorite pre-code movies -- it's one of my favorite movie musicals, period.

The pairing of Maurice Chevalier and Jeanette MacDonald brings to mind what Katharine Hepburn is alleged to have said about Fred Astaire and Ginger Rogers -- "he gives her class and she gives him sex" -- but in reverse. MacDonald's regal bearing (even when she wasn't playing a princess) and cultured soprano is perfectly counterbalanced by Chevalier's good humor and growly, untrained voice.

Their paths cross when Maurice pursues Charlie Ruggles as a deadbeat vicomte (French for "viscount," if you care) to his family castle, where the women -- Princess Jeanette and Countess Valentine (Myrna Loy, sexy as hell) -- are literally wasting away from lack of love. See for yourself:

The lord of the castle, the stern Duke (C. Aubrey Smith), keeps everyone in line, or so he thinks, and three maiden aunts (Elizabeth Patterson, Blanche Frederici and Ethel Griffies) are a Greek chorus commenting on the action. Princess Jeanette's only suitor is a hapless count played by the Hapsburg of the hapless, Charles Butterworth.

This, to me, is exhilarating filmmaking -- storytelling in a style that still seems contemporary and clever. Taking a score by Rodgers and Hart consisting of songs that are spoken as well as sung, director Rouben Mamoulian worked with screenwriters Samuel Hoffenstein, Waldemar Young and George Marion, Jr. to shape the story around the music.

Truthfully, the story is the weakest part of "Love Me Tonight," but it's more than enough to carry the score and the performances. Maurice is a tailor. The viscount owes him money. He goes to the castle to get paid. Princess Jeanette is nearby, riding in a carriage and combining the lyrics of "Lover" with commands to her horse (I wish I had a clip to share with you) Maurice meets Princess Jeanette and falls in love.

She resists his advances and runs away. They meet again at the castle, where the viscount passes off Maurice as a baron. Everyone else in the castle loves Maurice as much as the princess dislikes him. How do we know? After he arrives, they all wake up the next morning singing "Mimi" -- even C. Aubrey Smith in what is undoubtedly his most joyous moment on film.

The princess finally comes around, falling in love with Maurice and then realizing, as he's fitting her for an impeccably-made riding habit, that he's a tailor. "Love Me Tonight" seems a little anticlimactic after that, though the plot turn does cause one character to say/sing, "I'd rather throw a bomb at her than have her wed a commoner."

Despite its atmosphere of sweet romance, "Love Me Tonight" does have its share of pre-code spice, including scenes of Loy and MacDonald in lingerie and other revealing outfits, some of which were trimmed during the movie's original release. And one raised eyebrow from Maurice Chevalier is worth a million double-entendres.

Here is the film itself (with commercials; sorry):