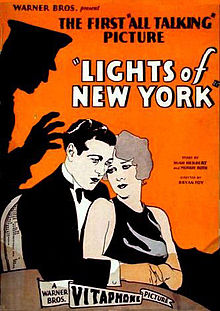 The opening exchange of the 1928 film "Lights of New York," a conversation between two gangsters in a hotel room, goes something like this:

Gangster 1: The bootleg rap against us has been dropped -- and we can go back to the big town tomorrow.

(Long pause, during which Lindbergh flies the Atlantic)

Gangster 2: Great! And what are we gonna use for money when we get there? Our bootleg joint is empty and we need dough!

Gangster 1: I've been taking care of that! You know that barber downstairs? He looks like a cinch to me. And after the talks we've been having, he thinks that joint of ours is a regular barber shop and not a speakeasy!

Billed as the first 100% all-talking film, "Lights of New York" should also get credit as a 100% all-pausing film. There are large cushions of air between every line of dialogue, and sometimes between words. And to include exclamation points in the dialogue is kind of misleading -- it implies that the actors deliver lines with some sort of emotion, and for the most part they don't.

But it didn't really matter. The film's novelty assured its financial success -- it was the second-highest grossing movie of 1928, beaten only by Al Jolson's "The Singing Fool." Still, even contemporary reviewers were less than impressed. Wrote Variety:

"It's that kind of a sappy mixture, the kind that recalls the mellers [melodramas] of ... ages ago. ... In a year from now everyone concerned in 'Lights of New York' will run for the river before looking at it again. ... [S]till, this talker will have pulling power, and the Warners' should get credit for nerve even if they didn't do it with a polish."

"Lights of New York" is the story of two small-town barbers -- Eddie (Cullen Landis) and Gene (Eugene Pallette). They are plying their trade in a hotel run by Eddie's mother. But they have dreams -- dreams of being big-time barbers in the Big Apple! Shearing scalps in the city that never sleeps! Scraping their straight razors across the mugs of Babe Ruth! Herbert Hoover! Fanny Brice! Here they discuss it, at length:


As illustrated above, people don't just say their lines in this movie -- they recite them. There's a lot of standing and proclaiming, and a lot of hooking of thumbs into vests. And there's music -- always music. In movies like this, a soundtrack is something to fill up, and music incessantly plays on the soundtrack whether or not it has any relation to the action.

Anyway, Eddie and Gene get a loan from Eddie's kindly mother and they set out for the concrete canyons. Six months pass, and Gene and Eddie realize they've been had. "About the only thing I shave around here are labels off bottles," sez Gene. (In fact, these guys never have any customers in the small town or in the big city. Maybe they're just lousy barbers!)

Eddie has rekindled a relationship with Kitty (Helene Costello), a girl from his hometown who works at a nightclub run by the evil bootlegger Hawk Miller (Wheeler Oakman). In a scene set in what we're told is "Central Park," Eddie and Kitty bemoan their fates. This clip has a little bit of everything -- cheesy sets, a line flub, bad acting and deadly pauses:

Then we hie to the nightclub, where we meet owner Hawk Miller and his mistress, Molly . They've been together a long time, and Hawk is starting to ogle the chorus girls, particularly Kitty.

Molly (to Hawk): You're a hound for chickens, ain't ya? You might get indigestion from too much chicken.

(Long pause during which wood turns to coal)

Hawk: Well, if I will, it won't be from an old hen.
Hawk has killed a cop in the process of transporting illegal hooch, and he plans to frame Eddie for the murder. But when he confronts Eddie at the barber shop, a shot is fired! And the Hawk is grounded in one of the clumsiest death scenes you'll ever see.

And just when you think things can't any worse, enter Det. Crosby (Robert Elliott), whose slow cadences make everyone else seem like they're on cocaine. Molly the mistress confesses to the killing of Hawk, and Crosby stretches ten words into what seems like ten minutes:


The film careers of the romantic leads, Cullen Landis and Helene Costello, were kaput by 1930. Gladys Brockwell, who actually acts a little as Molly, was killed in a 1929 car crash. The only folks whose careers survived "Lights of New York" were Pallette; the cop, Robert Elliott (who went on to play dozens of cops); and Tom Dugan, who played comic bits in dozens of movies and, during World War II, found himself playing Hitler or Hitler surrogates in movies such as "Star Spangled Rhythm" and "To Be or Not to Be."
at August 06, 2015
Email ThisBlogThis!Share to TwitterShare to FacebookShare to Pinterest
Labels: "Lights of New York", 1928, Awkward Early Talkie Theatre, Eugene Pallette