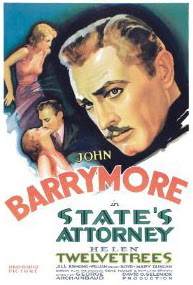 The 1932 film "State's Attorney" and its 1937 remake, "Criminal Lawyer," are based on the same story by Louis Stevens.

But in the hands of different screenwriters working under different production codes -- and performed by lead actors with distinctively different styles -- you get two, well, different movies.

Stevens's story is about a flamboyant attorney who's the mouthpiece for a big-city gangster. Thanks to the gangster's influence, the attorney becomes the chief prosecutor and starts dreaming of the governorship. But then the gangster commits murder, and, thanks to the love of a good woman, the attorney risks the wrath of his biggest backer -- not to mention his life -- to see that justice is done. 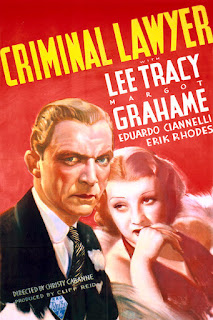 The screenplay for the Barrymore film, "State's Attorney," was written by Rowland Brown and Gene Fowler. Brown was responsible for some tough, notable pre-code movies, including "Hell's Highway" and "Doorway to Hell." Fowler was a longtime Barrymore crony -- he kept vigil at Barrymore's deathbed and later wrote the Barrymore biography "Good Night, Sweet Prince."

So the character of Cardigan is very much colored by what seems like Barrymore himself -- a wisecracking blend of impishness and melancholy, with plenty of boozing thrown in. Barrymore slides from comedy to drama with great grace and style. He doesn't look like he's acting, which is the best kind of acting.

The Tracy film, "Criminal Lawyer," is likewise heavily colored by its leading man, which isn't necessarily a good thing.

Tracy's screen persona was that of a fast-talking operator who was often just this side of being a con artist. Barrymore knew how to let silence work for him; with the characters Tracy played, there aren't any moments of silence, because to stop talking meant that the rubes were more likely to catch on to your scheme. 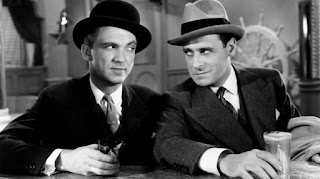 Beyond that, the script for "Criminal Lawyer," written by G.V. Atwater and Thomas Lennon, is scrubbed clean of spice. Sure, there's crime aplenty, but very little of that sex stuff.

Both movies begin with a party thrown by the gangster -- in the 1932 film it's Valentine "Vanny" Powers, played by William Boyd, and in the 1937 film it's Larkin, played by Eduardo Ciannelli (seen with Tracy at left).

The party is raided, and we end up at night court. In both movies, the gangster orders the attorney to sweet talk the female judge into releasing the party without bail. But the attorney is feeling contrary, so instead he makes sure the judge sets bail -- at fifty bucks a person, which the gangster grudgingly pays.

Here is where things begin to diverge.

Next up on the night court docket is a woman -- in the 1932 film she's June, played by Helen Twelvetrees; in the 1937 film it's Madge, played by Margot Grahame.

Both women have been picked up for soliciting, although in the 1932 film it's much clearer. June, in fact, works for Vanny, which means he also does some pimping on the side. But as opposed to Vanny's well-heeled patrons, she really does need help, and Cardigan jumps in. First he reaches into his coat pocket, pulls out a wedding band, and slips it on June's finger. Then he stands before the judge and proceeds to pull on her heartstrings:


This is a pretty cynical scene, but Barrymore plays it completely straight and practically makes you believe him. As Brandon, Tracy isn't as conniving as Cardigan -- he doesn't carry a wedding band in his pocket. Madge is already wearing a costume jewelry ring, so he turns it so that its large setting is hidden and only the band shows. Oh, and Madge doesn't work for the gangster -- she's apparently a freelancer.

The way Cardigan cross-examines the cop who arrested June also has more of a pre-code bite. Seems the cop served a hitch in reform school, and if we don't get the point that he's a bad egg we hear that after being paroled he was sent back again for torturing a dog. In "Criminal Lawyer" we don't hear anything about that.

In both movies, the attorney ends up taking the woman back to his place. Cardigan gently removes June's coat and pours her a drink, and she asks him what he wants for breakfast in the morning. Brandon, on the other hand, wastes no time in getting Madge an apartment in his building. No impropriety (or breakfast, for that matter) here! June is pretty clearly kept by Cardigan, but not Madge -- she goes to work in Brandon's office, where she can gaze at him longingly.

Once they become chief prosecutors, both attorneys hitch their star to a headline-heavy murder case -- a housewife (named Nora Dean in the 1932 film, Nora James in 1937) is accused of killing her husband as he slept. Nora whoever contends it happened during a break-in. Both attorneys are determined to break down Nora on the stand, and the 1932 treatment is much more lurid than the 1937 one. Cardigan has the bed where the murder take place brought into the courtroom, so that the jurors can see the bloody sheets. Then he takes the murder weapon -- an iron sashweight -- and incessantly taps it on the metal bed as he questions the suspect. In the 1937 film, there are no such histrionics, and Brandon takes only about five seconds to elicit a confession from Nora:


Romantic rivals rear their ugly heads in both movies in the form of the spoiled daughter of a political kingmaker. In the 1932 film it's Jill Esmond as Lillian, who purrs lines like "to me there's something thrilling about a woman killing for love." She's hot to trot for Cardigan, who willingly (if drunkenly) marries her to ensure his political success, even if it means shafting June. Her 1937 film equivalent, Betty, played by Betty Lawford (Peter's cousin), is kind of wan, and she shanghais Brandon into marrying her.

In both movies, however, the woman's character is quickly disposed of because the attorneys quickly have second thoughts, and because the women have eager suitors waiting in the wings. And as luck would have it, both suitors are played by actors with tangential relationships to Astaire-Rogers musicals.

In the 1932 version, Lillian is wooed by Alvarez, played by Raul Roulien, who would also play Gene Raymond's rival for Dolores Del Rio's affections in "Flying Down to Rio." In the 1937 film, Brandon's romantic rival is Bandini, played by Erik Rhodes (left), the comic actor best known as the Italian gigolo in "The Gay Divorcee" and "Top Hat."

There's a scene in both movies where the attorney meets with the suitor and lets him know that he's cutting the daughter loose. In the 1937 film, it's done with lots of mugging from Rhodes, and in the 1932 version it's done over a glass of saline laxative -- see for yourself:

The dramatic climax of both movies comes when the gangster goes on trial for murdering a rival ("Bird Legs" Duffy in the 1932 film and "Bird Dog" Duffy in the 1937 film, if you must know). The murder was witnessed by June/Madge, but she won't talk for fear the gangster will harm Cardigan/Brandon. In the 1932 version, there's an even stronger reason for Cardigan to back off from prosecution -- he himself was a burglar and served time in reform school.

And the ending, the same in both movies, is what you'd expect for that time -- the attorney walks out of the courtroom with his self-respect intact, along with the woman who stood with him through thick and thin.

We'll close with one more moment from the Barrymore movie -- a drunken conversation between Cardigan and a carriage driver where Cardigan is plinking out the wedding march on a series of half-full glasses of beer: