Pre-Code vs. Post-Code: "Grand Hotel" and "Week-End at the Waldorf"

Vicki Baum's 1929 novel (and play) "Grand Hotel" was purchased by MGM, and in 1932 the studio released a film version featuring all the big shots on the lot -- Greta Garbo, John Barrymore, Joan Crawford, Lionel Barrymore and Wallace Beery, with Lewis Stone and Jean Hersholt thrown in for good measure.

Then in 1945 came "Week-End at the Waldorf," also from MGM, also based on Baum's work, featuring all the big shots on the lot -- Walter Pidgeon, Lana Turner, Van Johnson, Edward Arnold and Keenan Wynn, with Ginger Rogers (in her first film for MGM), Robert Benchley and Xavier Cugat and his orchestra thrown in for good measure.

"Grand Hotel" takes place in Berlin just before the Nazis come to power, and that setting -- along with the fact that the world seems to be closing in on several of the characters -- gives the film an air of melancholy. In typical pre-code fashion, there are several adult relationships and a cynicism that, by contrast, is almost totally missing from "Week-End at the Waldorf." World War II informs the latter film, which is understandable because it was happening at the time, but everything is covered with that slick, impenetrable MGM sheen. While "Grand Hotel" ends with a sense of disquiet, there's never really any doubt that everyone and everything in "Week-End" exists solely to steer the film toward a multitude of happy endings. 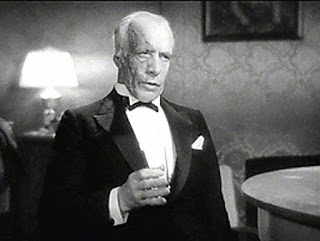 To see how vivid the contrast can be, consider the character who acts as a kind of philosophical narrator in each film -- in "Grand Hotel" it is the doctor (Stone, seen at left), whose face was horribly disfigured by a grenade during World War I. The good doctor is morose, to say the least. He haunts the lobby and is given one of the film's most famous lines: "Grand Hotel. People coming, people going. Nothing ever happens." But he's also given lines that hint at his loneliness and emotional desolation, like "A man who is not with a woman -- is a dead man." 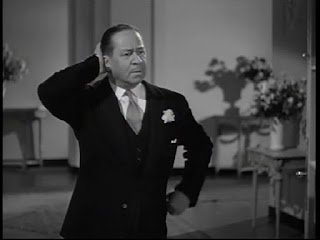 In "Week-End at the Waldorf," on the other hand, our narrator is Randy Morton, played by Benchley. He's a superficial, silly-ass Broadway columnist who spends the whole movie worrying when his precious pooch is going to pop out pups.

Most of the characters of "Grand Hotel" are as alienated as the doctor -- Garbo plays prima ballerina Grusinskaya, whose physical and emotional exhaustion is affecting her work and draining her of life. The Baron (John Barrymore) is all hat and no cattle -- a gentleman with an empty title who resorts to petty theft to keep up appearances. The unfortunately-named Flem (Crawford) is a plucky stenographer who isn't above selling herself to get ahead. Preysing (Beery) is a bullying, hypocritical industrialist trying to set up a shady merger to save his Teutonic tush. Kringelein (Lionel Barrymore) is a lowly clerk in one of Preysing's factories, visiting the hotel for a last fling before being felled by a terminal illness. And Senf the head porter (Hersholt) is anxious because his wife is having a difficult labor offscreen. 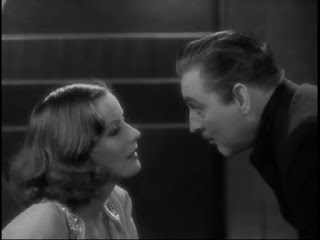 But the real tragedy at the heart of "Grand Hotel" lies in the doomed romance between the Baron and the ballerina. They've seen each other around the hotel -- everyone has seen the Baron -- but they've never spoken.

One night, while she is performing, he slips into her vacant room to lift a string of pearls. She enters unexpectedly and he starts a slick line of patter that soon turns sincere. They Hit It Off.

In "Week-End at the Waldorf," the ballerina has been turned into unhappy actress Irene Malvern (Rogers) and the Baron has become war correspondent Chip Collyer (Pidgeon). In one of the best touches in Bella and Sam Spewack's script, their romance parallels that of Garbo and Barrymore, but with a much lighter tone -- and with lines of dialogue that even reference "Grand Hotel," not to mention a couple other MGM movies.

Chip to Irene: "I'm the Baron, you're the ballerina and we're off to see the wizard!"

Irene isn't nearly as depressed as the ballerina, and Chip is no thief, although he's mistaken for one at first. The give-and-take between the two characters is geared more to romantic comedy than high drama, but so what? Rogers is great at romantic comedy and Pidgeon more than meets her halfway. When they end up having to pretend to be married, we just go along for the ride.

In "Grand Hotel," the ballerina and the Baron spend the night together, and he tells her his simple and cynical story.

Baron: "When I was a little boy I was taught to ride and be a gentleman. Then at school, to pray and lie. And then in the war, to kill and hide. That's all."

That is not a speech you would hear in a movie released in 1945.

The Baron and ballerina share a room -- hell, they share a bed. Hell, they may even have shared more than that! 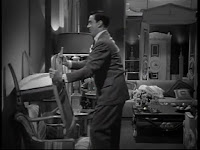 In "Week-End at the Waldorf," Chip spends the night in Irene's suite because the house dicks think he's a thief and he has to hide out. But you can bet your bottom dollar that they stay in separate rooms, mister! They even make a big deal out of piling furniture against both sides of the door. We get it, 1940s people! 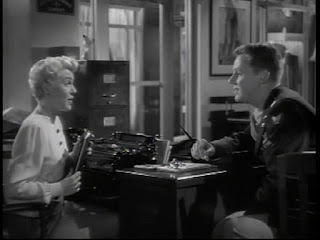 In other remake news, Lana Turner takes Crawford's role as the stenographer and Lionel Barrymore's character is played by -- Van Johnson? Yep. Turner is Bunny -- that's her name -- and Johnson is Hollis, an Air Force Captain who will soon undergo a dicey operation to remove a piece of shrapnel that's dangerously near his heart (!). Bunny dreams of a nice place on Park Avenue, while Hollis just wants to get well and go home to small-town California. Oh -- and he also is carrying a song, written by a dead war buddy, that he wants Xavier Cugat's orchestra to play. You can pretty much guess what happens there.

Bunny, meanwhile, is torn between Hollis and the shiny things dangled in front of her by Edley (Arnold), an unscrupulous entrepreneur. And Wynn is a cub reporter snooping on Edley's shady doings.

In the 1932 film, the plot threads are much more intermingled than in the 1945 film. The Baron, in fact, pretty much interacts with every character in the movie, and he is the real heart of "Grand Hotel." His death at the end of the film is genuinely affecting, devastating the ballerina, who loved him, and Kringelein, the odd duck whom the Baron befriended while everyone else dismissed him. The last indication of the Baron is his beloved dachshund, left behind to be cared for by the staff.

There's also a dog in "Week-End at the Waldorf," as we mentioned, but it's just a symbol of silly rich people. That's just one of the many reasons why "Grand Hotel" seems to have more of a heart -- even if it's a sad heart -- than its remake, which is entertaining enough, even if it has a whole lot less on its mind.