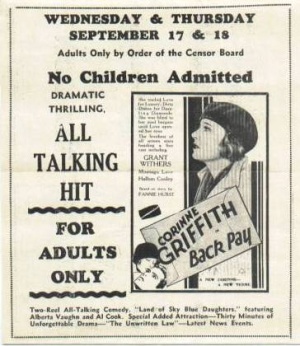 "If the wages of sin is death I've got a lot of back pay coming!"

Corinne Griffith says this about halfway through the 1930 film "Back Pay," and if you understand what it means, you're ahead of me.

"Back Pay," which is a remake of a 1922 film, is about a young woman whose love of money and fast living take her from Demopolis, Virginia to New York City. There she falls into numerous affairs and lives the hotcha life.

Meanwhile, back in Demopolis, Faithful Boyfriend Gerald toils away in the town department store, waiting for his love to return.

Griffith had a successful career in silent movies, but she made only a handful of talkies, and when you see "Back Pay" you'll get a good idea why. The movie opens with her singing "They Didn't Believe Me" in an understated, charming way, but then she starts talking: 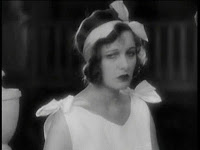 Griffith had the looks for pictures but she didn't have the voice for talkies. Her flat, unaffected monotone makes every line sound dull -- even the jokes. And it doesn't help that she's playing a character in her late teens when in real life she was in her mid-30s.

Griffith's character, Hester Bevins, lives with her aunt in what is apparently a house of ill repute. At one point she expresses her disgust with "my aunt in that filthy pink kimono -- sitting there with the men." While Faithful Boyfriend Gerald (Grant Withers) waits in the parlor, Hester sneaks out and hops a train to the big apple with a fast-talking traveling salesmen.

Fast forward a few years, and Hester has hooked up with tractor magnate Wheeler (Montagu Love). World War I is underway, and Wheeler is -- heh heh -- making a killing. "Don't profiteer more than is good for your health," Hester says monotonally.

A little later, while she and her rich buddies are on holiday, Hester ends up driving through Demopolis, so she tracks down Faithful Boyfriend Gerald, who's still working at the store:

By this point, America is involved in the war, and Gerald enlists, while Hester goes back to the city. An intertitle says: "While some marched through New York to lay down their lives, others stayed and laid down their honor." Burn!

Hester is partying at Lake Placid while Gerald is in Germany, dodging bullets and inhaling mustard gas. He ends up in the hospital with lung damage and blind. Hester, on the other hand, sees clearly for the first time, and she marries Gerald, even though (or perhaps because) he's terminally ill.

Then comes Armistice Day, and the end of the war coincides with the end of Gerald:

And although "Back Pay" was close to the end of Griffith's movie career, she went on to lead a pretty interesting life. She wrote numerous books, including a memoir called "Papa's Delicate Condition" that was made into a 1963 film with Jackie Gleason. She was a real estate magnate, worth an estimated $150 million when she died in 1979. She wrote the lyrics to the Washington Redskins fight song because one of her husbands owned the team. And during divorce hearings from her fourth husband in 1966, Griffith claimed that she was actually her own younger sister.

Here are the complete credits for "Back Pay."