May 09, 2013
Even though it isn't entirely unexpected, there's still a lot of talk about h-e-double hockey sticks in the 1935 film "Dante's Inferno." Because it's a legitimate part of the plot, "hell" is thrown around with abandon, like a five-year-old just given permission to say a forbidden word. ("Mommy said I could say doody, daddy! Doodydoodydoodydoody!")

But beyond the word, hell itself makes a hellacious twenty-minute appearance (or maybe it just seems like twenty minutes) about two-thirds of the way through the picture in a sequence filled with naked, sweaty extras writhing in torment. It's like Saturday night at the Playboy Mansion! Only with (slightly) more pain.

And then at the end, there's another hellish setting featuring Crepes Suzette and -- Rita Hayworth?

But, hell, let's not get ahead of ourselves. We'll start at the beginning.

Our protagonist is Jim Carter, played by Spencer Tracy. When we first meet him, Carter is working on the crew of a luxury liner. He's down in the engine room, where sweaty, muscular guys stripped to the waist are shoveling coal into a gaping maw of flame! It's like Saturday night at the -- oh, wait, already did that joke. 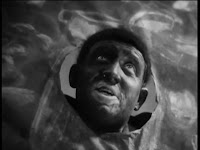 Actually, Carter isn't doing any shoveling. He's faking an arm injury and he's convinced the other guys to do the work. But he gets fired because of his goldbricking, and ends up at a seedy carnival. (As opposed to a classy carnival.) He gets a job in blackface, with his head supplying the target for ball throwers in one of the sideshow booths. He quits that job after a direct hit and meets Pop (Henry B. Walthall), who looks pretty much how you would expect someone named "Pop" to look. Pop is the pop-erator of another attraction on the midway called "Dante's Inferno." It's striking, but small-time.

Pop: I'm just offering a little glimpse of hell and a few suggestions on how to keep out of it.

When it's time to start touting the attraction, Pop steps up, and he's the worst carnival barker ever -- his voice is barely above a whisper and he uses words like "endeavor." So Carter gives it a try:

Then he talks about hell some more, because he can.

To Betty he says, "With your brains and my personality we'll build them the biggest hell on earth."


Hell, Betty buys into Carter's vision to sell hell at 25 cents a pop, and, hell, they get married in a carnival ceremony, with the organ grinder's monkey as a bridesmaid.

Then, hell, Carter embarks on his plan to build a bigger, better inferno, even if he has to drive some rival vendors out of business to do it. Pop is leery as hell, but it doesn't matter:

On the opening night of the new, improved inferno -- Now with 40% more damnation! -- one of the swindled vendors shows up and commits suicide. But business booms anyway, and Carter keeps adding on to his boardwalk empire. A pesky building inspector tells Carter that the new inferno is unsafe, but a bribe keeps him quiet -- until the building collapses and the inspector commits suicide, too. Carter is charged in connection with the crime, but he lies on the stand and gets off.

This means it's just about time for Pop, who was injured in the collapse, to tell Carter all about Dante's actual version of hell, with the help of a nicely illustrated book:

The hell sequence is visually astounding. It supposedly incorporates footage from a 1924 version of "Dante's Inferno." Also, director Harry Lachman was trained as a painter, so you figure his touches are in there somewhere. And director of photography Rudolph Mate also lent his skills to "Cover Girl" and "The Pride of the Yankees," as well as directing the noir classic "DOA," so he was no slouch either. There's also a substantial contribution from the guy who choreographed the burning of Atlanta in "Gone with the Wind." Yes, you can choreograph fire. Especially if you're David O. Selznick.

Pop's pep talk and a vivid visit to hell don't do much good, however.

Pop: Dante is giving us a terrifying picture of tormented souls ... we make our own heaven or hell here on earth.

Carter: Since the beginning of time, there's only been one sin and that's failure.

Carter, undaunted, embarks on his next project, a gambling ship -- one similar to where he worked at the beginning of the film. It's called the Paradise -- more like pair of dice, am I right?

On the ship's first night out, bad omens gather like vultures gathering around the dead things vultures like to gather around. The crew is inept, the passengers are drunk, and flaming desserts are being prepared right next to highly flammable curtains. While a dance team that includes Rita Hayworth is spinning on the floor, things are quickly spinning out of control:


To add to Carter's problems, his young son is on board, and ex-wife Betty -- yes, she's left him -- is frantic. Will the possible loss of his son knock some sense into Carter? Or will he continue to build his own hell RIGHT HERE ON EARTH?!?

Trevor is fine in a thankless role, and, as Pop, Henry B. Walthall still has that same quiet nobility -- and the same hair -- of the Confederate soldier he played "The Birth of a Nation." (Walthall would pass away in 1936, a year after this film was released.)

As an actor, Spencer Tracy had a marvelous ability to look dumb and smart at the same time, and as Carter he uses that skill to good advantage. This was one of the last films Tracy made with Fox before joining MGM and becoming Hollywood royalty, and legend has it he had such a low opinion of "Dante's Inferno" that he refused to allow his name to appear on advertisements. On the other hand, maybe Fox figured that Tracy wasn't as important to selling the picture as hell was.