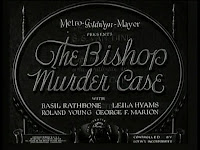 They're both set in mansions in New York City, and they both feature murders solved by Philo Vance, S.S. Van Dine's smooth Shamus who isn't even slightly embarrassed about his first name. (In Van Dine's later book "The Gracie Allen Murder Case," the comic actress keeps calling him "Fido.") 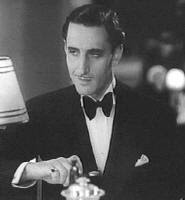 And truthfully, there's hardly a dime's worth of difference between the performances of Basil Rathbone, who plays Vance in "Bishop," and William Powell, who played Vance in "Kennel," among others.

But there's a big difference between the two films -- even though they were made only three years apart, huge advances in film acting, storytelling and technical ability are clearly evident.

"The Bishop Murder Case," released in 1930, is an early talkie. And to get an idea of the film's slow pace, creaky performances and technical timidity, take a look at the opening sequence:

It isn't totally the fault of director Nick Grinde that the movie looks more like a filmed play -- there were limitations on the camera based largely on the new process of sound recording. And it shows.

But the movie is plagued by another problem that can't be blamed on the camera -- aside from Rathbone and Roland Young, who plays a suspect, the rest of the cast doesn't just chew the scenery -- they cram it down their throats while smacking their lips and belching. (Figuratively speaking, of course.) This movie is filled with supporting characters who widen their eyes ultra-theatrically while enunciating their dialogue as if they learned it phonetically. Calm down, people!

The idea is that folks keep getting murdered in the style of nursery rhymes -- a man named Robin is shot with an arrow, just like Cock Robin. A hunchback falls off a wall, just like Humpty Dumpty. And the murders center around elderly professor Dillard (pronounced Dull-AHRD) and his niece Belle (Leila Hyams). Another murder occurs in Central Park, where Belle has been summoned by her fiancee, played by Young, and it's staged in an agreeably creepy way:

The man's name is Jack, and he falls down (well, he was pushed) and breaks his crown.

Vance is on the case, and as always, his frenemy is Det. Sgt. Heath, here played by James Donlan. Heath's job is to consistently reach the wrong, but most obvious, conclusions about murders and suspects, and he makes fun of Vance's theories. In this nice scene, Vance shows Heath just how sound his theories are:

As stilted as "The Bishop Murder Case" can be, that's how slick "The Kennel Murder Case" is. Under the direction of Michael Curtiz, the story unfolds with speed and confidence, and backing up Powell is an expert group including Mary Astor, Eugene Pallette (as Det. Sgt. Heath), Ralph Morgan, Robert Barrat, Jack LaRue and Helen Vinson. Unlike most of the cast in "The Bishop Murder Case," these people knew how to modulate their performances for the movie camera.

Sir Thomas's terrier turns up dead (not a euphemism), and suspicion centers on Coe, but it isn't long before he himself is found dead in his locked bedroom. Vance is just about to sail for Europe, but when he hears of the murder he calls the district attorney. Splitscreen powers activate!

The temptation is too great, and Vance jumps ship to solve the mystery.

Meanwhile, back at the Coe mansion, assumptions are being jumped to. Suicide, says the ever-reliable Heath, but Vance proves it isn't. He figures out that Coe was murdered, and the killer used an ingenious little pulley system to lock the door behind him:

Vance's next job is to narrow down the suspects from the list of approximately eight million people who hated Coe's guts. And when Sir Thomas ends up being hurt in an attack that no one actually witnessed, suspicion falls on him:

"The Kennel Murder Case" includes several flashback sequences, which were unheard of in 1930, and a fair amount of humor, mostly involving Etienne Giradot as a fussy coroner who keeps getting his meals interrupted by the number of dead people who turn up at Coe's house. Powell isn't quite as droll here as he would be as Nick Charles in the next year's "The Thin Man," but he's just as sharp and dapper.

Here are the credits for "The Bishop Murder Case," and a trailer:

Here are the credits for "The Kennel Murder Case," and a trailer: