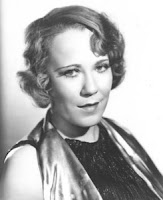 Of all of the actors and actresses who appeared in 1930s films, Louise Fazenda (1895-1962) was certainly one of them -- and certainly the only one of them who has a tangential connection to "Reservoir Dogs," of all things.

We'll get to that connection in a few paragraphs.


Born in Lafayette, Indiana, Fazenda moved to Los Angeles with her parents as a child. In 1913 she made her movie debut in short comedies, and by 1915 she was playing opposite the likes of Fatty Arbuckle at Keystone.

Unlike other Keystone actresses such as Marie Prevost and Carole Lombard, Fazenda was never one of the studio's Bathing Beauties. Her specialty was more along the lines of straight-laced spinsters or gawky country girls.

Fazenda left Keystone in a salary dispute with Mack Sennett in the early 1920s and spent a year or so in vaudeville. Then she returned to movie making at Warner Bros., where she stayed until retiring from the screen in the late 1930s.

In 1929, Fazenda was one of about, oh, eight million contract players appearing in Warner's talkie extravaganza, "The Show of Shows." Free of a spinster or hillbilly costume for once, she wears an evening gown and does a comic number with Beatrice Lillie, Frank Fay and Lloyd Hamilton that includes the slicing and dicing of four different poems into one naughty-sounding one. Here it is:

(Click here for the second part of this number, where the quartet lampoons the song "Your Mother and Mine.") 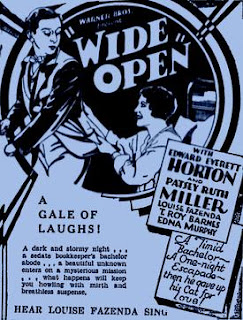 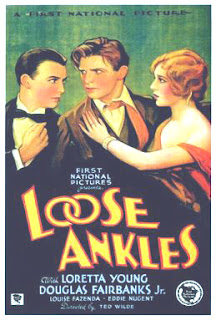 In two 1930 films, "Loose Ankles" and "Wide Open," Fazenda does something kind of sneaky -- she steals the show, or at least provides some lively moments, with her spinster characterizations.


Like a lot of early talkies, "Loose Ankles" is ten minutes of plot played out over 65 minutes of celluloid. It opens with Loretta Young getting some attentive tootsie time ...

... from her elderly butler? Kinky.

But such is life for Loretta, a carefree example of flaming, or at least smoldering, youth. How carefree? Well, she has just inherited a million dollars, but care? She is free of it. The will stipulates that to get the money she must remain untainted by scandal, but instead Loretta puts an ad in the newspaper specifically seeking taint.

Meanwhile, over at the Gigolo Arms Apartments, fledgling fancy man Douglas Fairbanks Jr. is pressed into service to answer the ad. He meets Young, and they go through flirtatiousness that involves him losing his clothing:

(Seeing Fairbanks in that dressing gown calls to mind Cary Grant in "Bringing Up Baby.")

But enough about plot! You should be able to figure out that Young and Fairbanks get together toot suite and scandal-free. Most of the rest of the movie takes place at a nightclub, where Young's tight, um, fisted aunts (one of them played by Fazenda) have gone to keep track of their niece and end up with two of Fairbanks's gigolo bros. The aunts are served strong drink, and Fazenda starts doing her stuff, with the help of Eddie Nugent:

Next we move to "Wide Open," a film that proves positively that you should never, ever give Edward Everett Horton a romantic lead. In supporting roles with the likes of Fred Astaire, or under the direction of Ernst Lubtisch, Horton could be a delight. But when he's the befuddled hero at the center of the story, well, that's a lot of stammering.


Horton plays Simon, a meek bookkeeper who works at a phonograph company. Fazenda plays Agatha, a fellow employee who loves Simon from afar. At one point, she corners Simon in a recording studio. He accidentally flips the "on" switch, and their conversation is captured on vinyl, only to pop up embarrassingly when the boss is trying to impress a client:

But the real plot of "Wide Open" is that Simon shelters a young woman (Patsy Ruth Miller) who gives him a sob story about being homeless. Somehow word gets around that they've gotten married, and the employees throw a party for the newlyweds at Simon's house. Agatha attends, and sings the blues:

The plot is wrapped up when it is revealed that Simon's young woman visitor is actually the plant owner's daughter, and with Simon's help she uncovers financial foolery at the phonograph factory. The boss rewards Simon, he marries the daughter, and Fazenda does a fast fade.

In real life, Fazenda married producer Hal B. Wallis in 1927, leading to jokes that he was "The Prisoner of Fazenda," haw haw. She made her final film, "The Old Maid," in 1939, and spent the rest of her days collecting art and performing philanthropic acts. As part of her work in a prison outreach program she befriended Edward Bunker, a convicted felon with a long record, and encouraged him to write. Bunker wrote a book, "No Beast So Fierce," and ended up co-adapting it into the 1978 Dustin Hoffman film "Straight Time." Bunker collaborated on a few other screenplays and ended up playing small roles in several movies, including "Reservoir Dogs," in which he was Mr. Blue.

Here are full credits for "Loose Ankles," and for "Wide Open."